10 Things to Look for at the Festival of Lights Parade 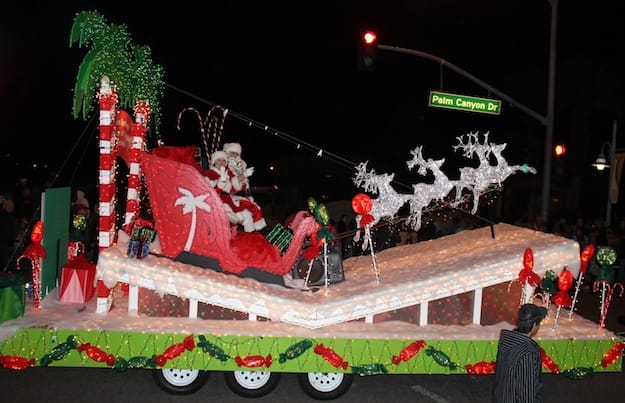 The Palm Springs Festival of Lights Parade draws one of the largest crowds to the downtown area to view more than 80 entries in what has become the signature event to starting the holiday season off on the right foot.

1. Share the holiday spirit with an expected 90,000 spectators, which means arrive early to alleviate parking issues and getting a seat along the parade route.

2. Film producer Jerry Weintraub, the parade's Celebrity Grand Marshal, will be honored with a street renamed in his honor.  The “Jerry Weintraub Drive” sign will be unveiled at the intersection of North Palm Canyon Drive and East Granvia Valmonte at 5 p.m.

3. Before the parade begins, browse the staging areas in the vicinity of Ramon Road to Sunny Dunes on Palm Canyon Drive to check out the floats up close and take photos. Judging of the entries takes place in the staging areas prior to the 5:45 p.m. parade start time.

4. Look for Santa on the “Jackie Lee Houston Santa Claus Express” float. Designed by Larry Abel, of Abel McCallister Designs, this is the second year Santa and his reindeer will glide along the parade route on the float’s vintage modernist butterfly roof covered in multi-colored lights with candy cane palm trees reaching for the stars.

5. Singer Lorna Luft will ride on the Desert AIDS Project float. With World AIDS Day also on Saturday, DAP invites clients, volunteers, and donors to throw on some lights and walk with them in the parade.

6. Watch for six Macy’s-style holiday balloons floating down the parade route, including a 40-foot Gingerbread Man and 30-foot Snowman. The balloons will be escorted by representatives of the Palm Springs Neighborhood Association.

7. Don’t miss the beginning of the parade! Last year’s Best Band winner, the Palm Springs High School Marching Band, will lead the parade this year with their award-winning sounds and talent.

10. Bring a canned food item for one of the Find Food Bank drop-off locations that will be located along the parade route.