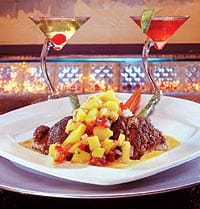 A stellar crop of outstanding new restaurants opened in the Coachella Valley in 2005. Adding to the mix of dining choices are restaurants created by first-time restaurateurs, seasoned multiple-restaurant owners, hotel reinventions, casino additions, and newcomers that simply exude star quality.

This time, they serve up the ultimate barbecue experience. Crazy Bones promises to “satisfy yearnings for authentic barbecue from Texas to Kansas City, the cradle of American barbecue.” Kaiser, a trained butcher and grocer, noticed that barbecue was one American food tradition that, before now, had not been reckoned with intelligently, critically, or with any culinary dignity.

Not that there’s dignity in pulling apart juicy Memphis Spare Ribs with your bare hands, or dribbling barbecue sauce down your chin, or stuffing a pulled chicken sandwich into your mouth. But there is a delicious intelligence in the fact that America’s southern regions are represented at Crazy Bones, an indulgence that should be long-lived at this energetic, upbeat restaurant. Grab a frosty cold beer, enjoy the view of Palm Canyon Drive from its second-floor terrace, and feel the melting warmth of fire from the stone fireplace and fire pit.

Perry Smith, Mark Neal, Drew Kim, and Ty Neal — creators of the first Matchbox two years ago in Washington, D.C. — enlisted chef Kevin Sharkey from Mahi Mahi’s in Virginia Beach, Va., commissioned him to a month of training at the capital Matchbox, and sent him to Palm Springs for the restaurant’s opening last March. His menu varies slightly from the D.C. location but remains based on simple, tastefully prepared dishes.

Handmade tables embedded with matchboxes from around the world — from Chinese hotels, past Olympic Games, and antique French boxes to Princess Diana and Prince Charles’ wedding — and a part of an old barn backlit in red strikes up the fiery imagery. You can quench any thirst with an eclectic array of California and international wines, boutique and brand-name breweries, as well as quittin’-time cocktails. Intrigu-ingly named beers include Delirium Tremens, Hoegaarden, Lost Coast Great White, and Rogue Dead Guy Ale.

The Steakhouse at the Spa Resort Casino is a spacious, stylish new endeavor with dark wood accents, upscale table dining, and Mediterranean-inspired patio for outdoor dining.

Creative martinis are a signature. The Plum Martini with plum vodka, cranberry, lemon and a hint of plum wine is just one of six featured concoctions. The bar is created from shiny new epoxy-encased pennies. Hanging behind it are three intricate “video wallpaper” works by artist Joe Hudson. Other visuals play on plums — both the fruit and the carpenter’s leveling tool. This hip little bistro could easily be on Melrose in West Hollywood or in San Francisco’s SoMo district.

Although technically in Cathedral City, the historic Villa Resort at Palm Springs — a stagecoach stop on the Butterfield line between Palm Springs and Indio in the 1800s and an Elizabeth Arden “fat farm” during the 1950s — has risen again with a colorful face that aptly frames its colorful past.

For lunch, try the classic club sandwiches, burgers, salads, and sandwiches. At dinner, it’s Pork Tenderloin with Dates in a Red Wine Reduction, Chicken in Champagne with 50 cloves of Garlic, and Pecan chicken with Banana Salsa, all served with seasonal vegetables, homemade soup or salad and baked potato or wasabi mashed potatoes with caramelized onions or rice.

Chef/owner Kalaya Gilstrap is passionate about her native cuisine. Mentor for the coconut milk-based curry sauces was her grandmother, “chef of choice” for parties and community gatherings in their Bangkok neighborhood. The elder trained and guided Kalaya’s skill — working from scratch with fresh coconut plucked from a friend’s grove, lemon grass, and curry — to wield in her an appreciation and expression of spirit that one’s native cuisine often becomes in a foreign land.

In the tiny oak-paneled quarters, still reminiscent of the former French restaurant, are touches of Thailand — an intricate medallion and Thai figure, the traditional hand-painted bowls from which her fragrant curry is served, and a gathering of tropical plants that wind over iron posts toward a rippling wall fountain. Yet the tapestry chairs, banquettes, European paintings, and dragonfly leaded-glass window seem more of a backdrop to an Asian restaurant that is growing into its own under Kalaya’s deft hand and passionate cuisine.

In another framework, Tastings, owned by well-traveled, wine-and-food enthusiasts — the husband-and-wife team of Marci Brietling and Bob Finlayson — captures the seductive experience of sharing wine and food among friends. Unlike traditional restaurants, Tastings has a living room atmosphere with low, sleek couches, club chairs, coffee tables, and a well-stocked wine bar surrounded by tall, chic leather stools, all sexy with soft lighting.

Opened last August for lunch and dinner, Tastings offers more than 40 wines by the glass: wines from small-production wineries and better-known vineyards. Every week, Tastings features two wine flights that include three to four two-ounce pours for comparison and contrast.

Complementing the wines are small portions of gourmet food designed to bring out the flavors and encourage experimentation. For example, suggested pairing for the Sliced Roasted Chicken Panini with brie, basil pesto, and vine-ripened tomato is a pinot noir from Cartlidge and Browne wineries. With a crispy wonton-wrapped tiger prawn, the suggested wine pairing is Darioush viognier. The succulent Pacific Rim Ahi Three Ways is suggested with a demi-sec Joyease at $16 per glass.

Brietling personally selects the interesting wines and “won’t serve anything that doesn’t taste fabulous,” Finlayson says. In addition to wines are beers from Belgium and Canada, as well as a sweet potato vodka which, when served martini style, is dubbed the “Tastini.”

Fresh and Wildflower Grille at Rancho Las Palmas Marriott Resort and Spa are two reinventions that work well together in an oddly configured space. Visual color and compatible cuisine make these two restaurants flow together yet offer congenial differences.

Palm Desert has its share of tony new restaurants and glam hot spots.

First on the mark, South Beach Restaurant and Night Club, a resurrection of the former Jetty at Painter’s Path and Highway 111, provides a new high-energy nightclub scene with live music Thursday through Sunday and a menu described as Caribbean with a twist of Asian fusion. South Miami Beach’s hot nightclub scene inspires this concept, previously missing from the desert.

Completely reconfigured, a central dance floor is surrounded by booths, couches, and chaise longues. Outside in back, upper and lower decks with fire pits, water features, and a waterfall spilling into the grotto provide a quiet, romantic spot away from the dance energy.

Hedi Hamrouni has relocated Hedi’s Café Paris to the Palms to Pines shopping center, where fans continue to enjoy his French Moroccan cuisine.

Patricia Hook, a longtime desert chef who cooks with an esoteric flair, has opened Firecliff restaurant on El Paseo, site of the former Le Peep, located near the east end of this “swellegant” boulevard.

Hook has gutted and rebuilt the space, creating a European ambiance with a large front terrace. The name refers to the historic Firecliff Lodge (a contraction of names: the Firestone family and Palm Desert founder Cliff Henderson.)

“I thought a new restaurant on El Paseo should have a historic name,” Hook says.

The Bistro, a new restaurant at Fantasy Springs Resort Casino is a classy, intimate dining experience with indoor and outdoor seating — and a five-seat sushi bar. It’s surprising that a casino restaurant has an ambiance this gracious.

The wide-ranging menu is a mix of Mediterranean bistro with an Asian kick. Philippine-born chef Joselito Asiato, a master sushi chef who is also well trained in teppanyaki cooking and French cuisine, is behind the multicultural, subtly Asian hand. Following Executive Chef Perry Mascitti’s edict, fresh is the buzzword at The Bistro.

From ocean-fresh tuna, yellow tail, and sea urchin sushi and creative rolls like the Salmon Asparagus and Fantasy Roll made with local dates to combination platters, the sushi bar is a hot spot.

Bistro starters like oysters on the half shell; a beef, chicken and pork Satay Trilogy glazed with tropical soy; and baby spinach and seared scallops only hint at the variety of entrées, pastas, and pizza. Alfredo lobster pizza, rosemary-laced rotisserie chicken, tomato-rich Bistro Cioppino, double-thick marinated pork chops — the cuisine choices are as far-flung as the continents from which they emigrated.