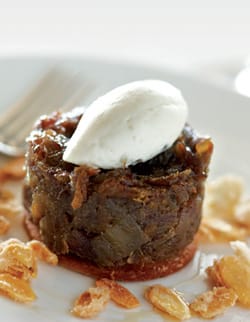 A Taste of the Southland

Jason Shaeffer bends to sniff some green leaves bursting from the farmed field of crumpled earth, picks a bright sample, and tastes it. His eyes roll in satisfaction.

“This arugula is ripe and delicious,” says the chef de cuisine at 1500 Ocean. Tonight he will turn it into a robust starter salad — a mix of organic lettuces, dried stone fruits and crumbled cotija cheese, all dressed with aged sherry vinaigrette — for his signature oceanfront restaurant at the Hotel Del Coronado in San Diego.

Shaeffer is treading the culinary footsteps of his mentor, Thomas Keller, named America’s best chef by Time magazine and the chef-owner of the world-acclaimed French Laundry restaurant in Napa Valley. Shaeffer was the opening sous chef and trained at Keller’s New York City eatery, Per Se.

“At first I was star-struck,” Shaeffer says. “But [Keller] was a good teacher. He taught me techniques and an invaluable philosophy of cooking. I learned about kitchen camaraderie and food on every level — from farmer through dishwasher.”

Keller insisted on tapping the bounty of the surrounding countryside. Shaeffer and other sous chefs visited organic farms in surrounding upstate New York, Pennsylvania, and New Jersey. They communed with farmers and studied local products from the ground up. Shaeffer believes this is the basis for Keller’s success and practices the same seed-to-sauce intimacy.

Peter Merriman, chef/owner of Merriman’s Restaurant in Waimea, Hawaii, had a similar vision in the early 1990s. He created a bridge between the Big Island’s agricultural and culinary communities. That vision became known as the Hawaii Regional Cuisine Movement, a cooking style featuring local produce and recipes.

On the island of Lana’i, Oliver Beckert, executive chef at Four Seasons Lana’i at Manele Bay and its companion property, The Lodge at Loele, tweaks that style to include the local lava. Beckert oversees waiters cooking island venison at guests’ tables on a hot lava rock. The dish is accompanied by celery and Granny Smith apple salad, red wine-poached figs, and Saba dressing with island-grown ingredients.

Like David Paul of Lahaina Grill in Maui’s verdant backcountry, Shaeffer is developing his own fusion of global flavors and local ingredients. He calls it “Southland coastal cuisine,” a style embracing the area from Santa Ynez to Mexico’s Cabo San Lucas that is ingredient-driven: a California-Mediterranean approach with some Mexican high notes. It includes the rustic Santa Barbara-style barbecue popular in the 1800s, in which meat is cooked over hot oak coals and served with pinquito beans.

“There is a local cuisine here in San Diego,” Shaeffer says. “We have incredible farmers markets in Hillcrest, La Jolla, and Ocean Beach. And we have developed a network of artisan product-makers.”

Most products derive from the fertile landscape of Temecula Valley and its prodigious vineyards 60 miles to the east, where the chef tastes what surely is the world’s sweetest, melt-in-your mouth strawberry. As a dessert for tonight, he’ll pile ripe berries and a scoop of his strawberry sorbet beside an airy pavlova and a pool of passion fruit foam.

Shaeffer visits one of his favorite organic produce purveyors, Dave and Tina Barnes’ Crows Pass Farm off Rancho California Road. He tastes a spike of new asparagus rising from the churned field, pronouncing it “perfect.” Later he checks out the Winchester Cheese Co., owned and operated by a family of immigrants who are recreating farmstead Gouda cheese from their native Holland. He will add their latest version, a black pepper-flavored Gouda, to the selection on his cheese tray and the aged Gouda with sun-dried persimmons and a splash of local vina la canon olive oil to the dessert options.

This young chef believes San Diego, once called “a sailor town,” has a new culinary sophistication that has risen from several factors: a more educated public, an abundance of local farmers markets, more boutique hotels, good new restaurants, and the redevelopment of downtown and the Gaslamp District.

However, some of that polish must be due to a strengthened partnership between chefs and growers, particularly to hands-on chefs like Shaeffer who believe in checking out the field, not just tasting in the kitchen.

Date Tart
(recipe follows or click above for picture and recipe)

Put dates, brandy, and water in a pan and heat until dates have absorbed liquid. Add orange zest and vanilla paste and allow to cool.

Place a small dollop of mousseline on top of each tart. Circle the tart with orange blossom honey and candied almonds.

Lay tuna on plastic wrap triple the size of fish. Season the fish with salt and rub with the lime zest. Pour honey over fish and roll the wrap very tightly. Let cure for at least 6 hours or overnight in the refrigerator. Remove from plastic and slice thinly.

In a blender, combine avocado, juice from one lime, and water. Add water as needed while blending to a smooth but airy paste. Season with salt and additional lime juice if needed.

Seed and julienne jalapeños; turn 90 degrees and dice. Seed, julienne, and dice red pepper. Julienne and dice onion. Place vegetables, water, sugar, and vinegar in a pot. Heat on high until one-quarter of the liquid remains. Remove from heat, stir in gelatin, and allow to cool.

Spoon avocado mousse on a plate. Roll half the tuna slices and set aside. Lay flat pieces of tuna beside mousse. Toss jicama and radish with salt and olive oil and spread over tuna. Top with rolled tuna slices and garnish with cilantro leaves. Spoon jalapeño jelly on plate around the fish.