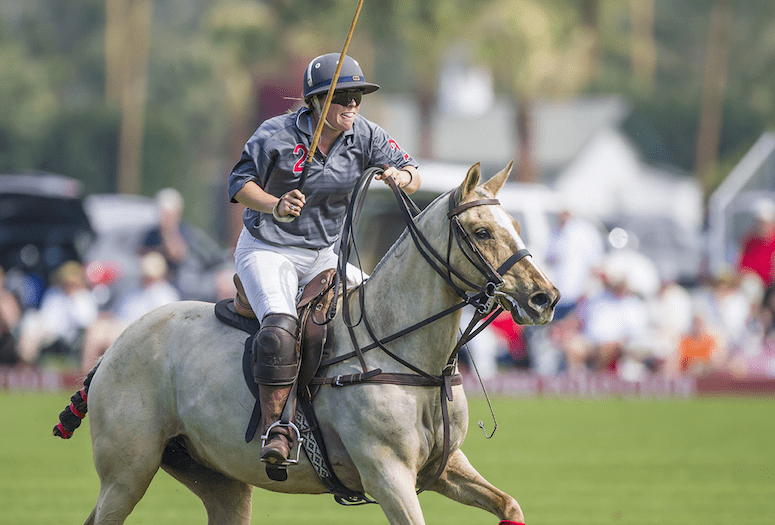 Madelyn Cobb is a fourth generation polo player in her family. She rides for Team M3 Sundays at the Empire Polo Club in Indio.
Photo courtesy of Jim Bremner

There is a strong history of polo in Madelyn Cobb’s family.

That’s surprising given the male image of the sport, but Cobb is a fourth generation polo player following her mother, also named Madelyn, grandfather and great grandfather, while her grandmother Madelyn was an ardent supporter.

“Women didn’t play until the 1970s, but we have a strong history in the sport,” the younger Madelyn Cobb says. “To honor the three Madelyn’s, I registered the brand name ‘M3’ for the team.”

Cobb has already made a strong showing for team ‘M3” with a pair of match wins at the Empire Polo Club last weekend. The 2015 Polo Season makes its official start in the Coachella Valley at noon Jan. 11 with its “Opening Day & Hat Day” at the Empire Polo Club in Indio. Matches will continue at noon and 2 p.m. Sundays through March 29. • is likened to high-speed hockey…on a horse.

•have four members on a team.

• has a “chucker” or period within the game.

Cobb says she keeps about 15 ponies here during season, managing, grooming, training and playing in field games. There are not many female riders playing at this level in polo. However, Madelyn, who was captain of her college team at Cal Poly, says, “I’ve worked so hard and I play as an equal on the playing field. I go into plays just as hard as I can.”

Dressing for polo is a casual affair, however, on “Opening Day & Hat Day” at Empire Polo Club, spectators are encouraged to wear their favorite hat on this day. Madelyn Cobb reaches to make connection with the ball.

General admission is free with a $10 parking fee for all Sunday afternoon polo games where you can enjoy tailgating with a picnic or grab a bleacher seat on a first-served basis. Reservations are highly recommended for VIP admission for $25 per person with food and beverage service available (no outside food or beverages allowed in the VIP area).