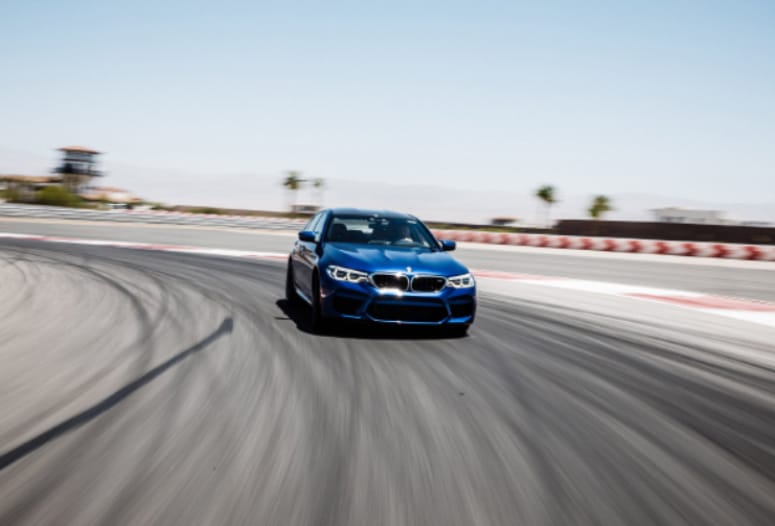 Among performance cars, the BMW M5 is a legend. As the top-dog model of each of the last five generations of BMW’s 5-Series, each M5 ranked among the fastest sedans of their time. The last two M5s had grown too heavy and complicated to feel truly engaging, so it is with great pleasure that I can report that for 2018, the M5 has become a charismatic creature once again.

The 2018 M5 is huge compared to the last truly nimble-feeling M5, the 2000–2003 “E39” model, yet it is actually 88 pounds lighter than the 2017 model despite adding an all-wheel drive system that nostalgic drivers can switch to pure rear-wheel-drive mode. As I discovered so many times on the track, its steering sparkles with feedback and responds with immediacy, especially in its Sport+ drive mode. And the air suspension keeps the car pan flat in corners. Its 600 horsepower and 553 pound-foot of torque are served up readily by the twin-turbocharged 4.4-liter V-8, shifted by a quick-shifting eight-speed automatic transmission that the driver can sharpen via a switch on top of the shift lever

A mellifluous fanfare blares forth from the quad exhaust pipes as if from a trumpet quartet. And of course, the new M5 is spectacularly fast: BMW claims that it can rocket from 0 to 60 mph in 3.2 seconds on its way to an electronically limited top speed of 155 mph, or 190 mph with the optional M Driver’s package.

I also got a fair amount of seat time in the M5 on public roads between the Coachella Valley and Los Angeles, where the M5 made going fast a more luxurious experience than ever. The sport seats are spectacularly comfortable despite their aggressive bolsters, and they look great too, with illuminated M5 badges in the headrests. My tester was equipped with soft-close doors, massaging seats, and a parking assistance feature that allows drivers to exit the car and tuck it into a tight spot using the smart key. The only thing I missed was a sunroof — which is available, though I’d have to say goodbye to the gorgeous, gleaming carbon fiber roof panel.

At the time of this writing, the 2018 M5 was available starting at roughly $105,000, including a $995 delivery charge and $1,000 gas guzzler tax. My tester, priced at almost $130,000, is far from cheap, but few other cars I’ve driven could take such a beating around a racetrack and then drive home, coddling its occupants like a proper luxury car. Welcome back to awesome, M5. — S.S.