July 2022: 23 Things to Do This Month in Greater Palm Springs

Dial up your favorite dance partner and head to Margaritaville Resort Palm Springs for a weekend of nonstop salsa, bachata, and Latin music indoors and by the pool. Hosted by Los Angeles–based Santiago Aguilar, better known as DJ Zonik, Escape features shows and workshops by professional dancers including Luis y Andrea, out of Spain, and Portland’s Ashle Magana — plus a fleet of Latin-focused DJs hailing from Los Angeles, San Francisco, and Mexico. Spend the daytime brushing up on your footwork. By night, take in expert performances for inspiration, then show off your fresh skills at ballroom parties, where DJs keep the beat thumping until 6 a.m. escapethefestival.com

View two decades’ worth of photos, videos, sculptures, and paintings by Mexican artist Gonzalo Lebrija at Palm Springs Art Museum. Lebrija often tilts the perspective on ordinary objects, as with his sculpture History of suspended time (A monument for the impossible), which turns a 1968 Chevy Malibu on its nose. psmuseum.org

Palm Springs Art Museum exhibits drawings, textiles, and other creations from Jacqueline Groag, a British designer who catered to the post-WWII hunger for fun and vibrant clothing and housewares. psmuseum.org 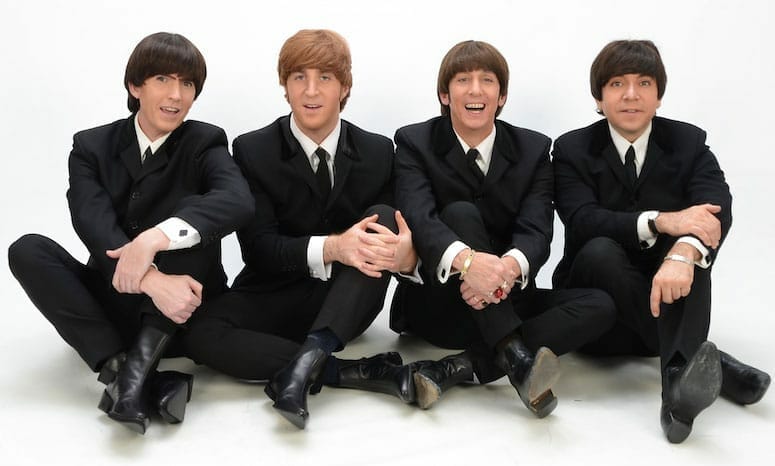 PHOTOGRAPH BY JEFF HOBSON
The Fab Four won an Emmy Award for their PBS special, The Fab Four: The Ultimate Tribute.

Rock out to favorites including “Can’t Buy Me Love” and “Yesterday,” and learn why the gents behind this ultimate Beatles tribute act, appearing at Agua Caliente Resort Casino Spa, won an Emmy Award for their PBS special, The Fab Four: The Ultimate Tribute. aguacalientecasinos.com

Escape the heat in the quaint mountain community of Idyllwild and browse artisan-made treasures such as ceramics, jewelry, and wood carvings. idyllwildartinthepark.com

Launched in 1971 off-Broadway, this musical touches on the life of Jesus Christ through parables and comedic songs by Oscar-winning composer Stephen Schwartz. See it at Palm Canyon Theatre in Palm Springs. palmcanyontheatre.net

Sequin pants. A full-face diving helmet. Pool floats. You know you’re in for a good time with this slide guitarist and one-man band whose songs include “Bubble Strut” and “My Shit Is Perfect.” Don’t miss Bob Log III light it up at The Alibi in Palm Springs. thealibipalmsprings.com

Though this version of the rock band Heart doesn’t include both Wilson sisters, Nancy keeps “These Dreams” flowing on her tour, which stops at Agua Caliente Resort Casino Spa. aguacalientecasinos.com

Frontman Alec Ounsworth didn’t shy away from heavy topics like divorce, substance abuse, or murder in the band’s 2022 release, New Fragility. Yet, Pitchfork reports, he broaches the subjects in an approachable way that seems nostalgic for a bygone indie-rock era. Hear the new stuff live at Pappy & Harriet’s in Pioneertown. pappyandharriets.com

Growing up around music led millennial Lucas Nathan to explore psychedelic folk sounds and experiment with several musical projects. Performing at The Alibi, their persona Jerry Paper often grooves around in a silk robe and doesn’t shy away from the weird. thealibipalmsprings.com

If “She’s Not There,” she probably high-tailed it to Pappy & Harriet’s to fangirl over these British rockers who cut their teeth alongside The Beatles. pappyandharriets.com

Bob Dylan, Elvis Costello, and Keith Richards have counted themselves as fans of this group, which has seen a rotating member lineup since its debut in the mid-1960s. Original member Terry Adams helms this show at Pappy & Harriet’s. pappyandharriets.com

If you missed Adams and his cohorts in the High Desert earlier this month — or if you’re keen to catch them again — head to downtown Palm Springs for this show at The Alibi. thealibipalmsprings.com

Sing along to country faves including “Somethin’ I’m Good At” and “Drunk on Your Love” as this platinum-selling singer-songwriter takes to the Fantasy Springs Resort Casino stage. fantasyspringsresort.com

Fancy a day trip? Cool off in the charming community of Lake Arrowhead at this free lakeside show put on by the local rotary club with classic, custom, and exotic rides. Stay for lunch in the central village area. portal.clubrunner.ca/7199

• READ NEXT: 26 Spots to Enjoy a Summer Cuisine in Greater Palm Springs.