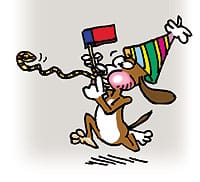 The happening parties in the desert blend tuxedos with wagging tails and glasses of bubbly with aqua-filled bowls. Amid the happy chatter, you can hear a few playful yelps.

From private homes to pet resorts to member-only country clubs, dog lovers are discovering the delights of canine celebrations. Marvelous mutts to playful pedigrees are unleashing the true party animals in their owners.

When Kim Laidlaw moved to Palm Springs last year, she wanted to celebrate the birthday of Sadie, her 2-year-old Border collie-Labrador retriever mix. She sent invitations, and 17 dogs and their people attended.

“It was a hoot,” says Laidlaw, director of programs and special events for Guide Dogs of the Desert. “At the time, I lived in a dog-friendly apartment complex that allowed dogs to swim in the pool. Dogs of all sizes, from Milo the Chihuahua to Alex the Great Dane, ran around, played, and enjoyed a liver-flavored cake.”

“We had party hats for all the dogs and played games,” Perricone says. “It was a lot like a little kid’s party, except that the birthday cake wasn’t chocolate but, rather, liver flavored.”

William Gazecki, a seasonal resident of Palm Desert, has championed canine causes for many years in the Tacoma, Wash., area. Five years ago, he pitched the idea of hosting a fun dog show here at the Avondale Country Club. Last year, the annual event raised more than $4,000, with proceeds going to Desert Paws and Indio Police Department’s canine unit.

“We give out blue ribbons for a variety of fun contests, such as the dog with the longest tail, shortest legs, and funniest hair cut,” says Gazecki, whose dog, Tattle, a 13-year-old Jack Russell terrier, captured the prize for the prettiest face.

Nationally, more than 10 million celebrate their dogs’ birthdays. Pampering pets is big business, with consumers spending more than $36 billion last year to cater to the needs and whims of their companion animals’ needs.

Locally, the boom in the pet industry prompted Jennifer Hamilton to quit the high-tech corporate world and pour her life savings into creating The Grand Paw. The pet-friendly place stages a variety of parties, provides doggy day care, and overnight lodging in cage-free suites. And, yes, there is a dogs-only pool and a large agility obstacle course on the premises.

“Mention dog parties and women tend to think it is a fun idea and guys think it is silly, but everyone has fun partying with their dogs,” Hamilton says. “We’ve had some dogs devour their pieces of cake and then jump up on the table and want more cake.”

Many of the delicious doggy delights come from the ovens of Bones-n-Scones, a fast-growing canine bakery operated by Kathy Hart in Palm Springs.

Most weekends find her inside a vehicle filled with homemade doggy biscuits, cakes, and other edibles. She covers the entire Coachella Valley to make sure canine guests get to be true chowhounds.

Step into her store and you come face-to-face with a bulletin board littered with photos of people and their dogs acting like true party animals.

“We use only fresh ingredients, no preservatives,” Hart says. “The bone-shaped cakes, especially the one with applesauce and grated carrots, and the beef liver-flavored one, rank as our favorite requests.”

Staging a dog party involves a few key rules: limit the party to two hours or less, require owners to attend with their dogs, serve food pleasing to the canine palate, and limit the invitations to dog-friendly dogs.

From Palm Springs to Coachella, the buzz is when and where the next dog party will be staged.

“Since we started hosting the fun dog show, other country clubs are now calling us for ideas,” Gazecki says. “That’s fine with me. I’d love to see more dog parties in the valley.”

Try these tail-wagging fun games at your next dog party as provided by Arden Moore’s book, Dog Parties: How To Party With Your Pup (BowTie Press, 2004).

Musical Chairs
To start this game, position folding chairs, making sure that there is one less chair than people-dog teams. Play lively music with the teams walking counterclockwise around the chairs. When the music stops, people must sit in the chair and instruct their dogs to sit by their side. Each round, the team that finishes last is eliminated. Remove a chair each round until only one person-dog team remains.

Snoopy Says
This doggie version of Simon Says reinforces basic obedience commands like “sit,” “down,” and “stay” in a party atmosphere. The rules are simple: each person-dog team must comply with the command whenever the leader, usually the host, says, “Snoopy says sit your dog.” People must get their dogs to heed the command within five seconds or they are out. Teams should not obey if the command is not preceded by “Snoopy says.” The last person-dog team standing wins.

Canine Will Power
Instruct each person to get their dogs lined up in a row and in sit positions. Say, “Leave it” as you place dog biscuits in front of each dog. The dog who resists the tasty temptation the longest and waits for the “OK” signal wins.