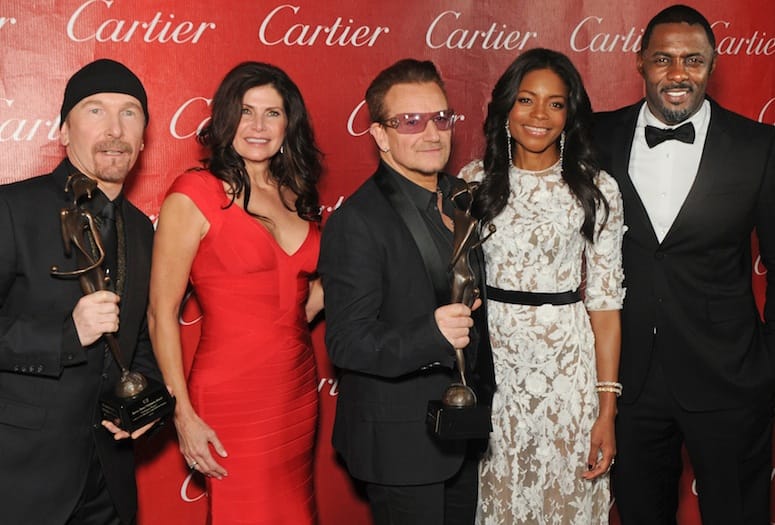 The most famous celebrities walked the red carpet amid cheers from fans, some of whom had waited as long as 24 hours to see their favorite screen stars in person.

Under the Presenting Sponsorship of the Palm Springs International Film Society and Cartier, Hollywood’s A List had moved to Palm Springs, if only for one evening. The event was also sponsored by Merzedes-Benz and Entertainment Tonight.

The usually stark ballroom at the Palm Springs Convention Center sparkled with crystal and red roses – more than 10,000 perfectly matched roses carefully selected and underwritten by dinner chair James Houston and created as magnificent three-tiered centerpieces by event planner Shari Kelley. A thoughtful touch was the stunning 25th anniversary PSIFF clock placed in front of each guest – a gift from Houston.

While it was the famous award recipients who received most of the attention and attracted a sold-out crowd, there was hefty applause for the five people who underwrote all 2,300 dinners served: Harold Matzner (film festival chair), Helene Galen, (vice chair), new board member Donna MacMillan, JoAnn McGrath, and Houston.

The show began with Doc Poster and his Film Festival Orchestra playing a medley of compositions by composers who have won the Fredrick Loewe Music Award for Film Composing during the past 25 years, including this year’s winner, Thomas Newman. This was his second film festival awards for writing the music to Saving Mr. Banks. The award was presented by the film’s director John Lee Hancock and Colin Farrell, who co-stars with Tom Hanks and Emma Thompson.

The Ensemble Performance Award was given to the stars of American Hustle by the film’s director David O’Russell. On stage to accept were Amy Adams, Bradley Cooper, Paul Herman, Jeremy Renner, Elizabeth Rohm, Shea Whigham and Jack Jones.

There was obvious love and respect between each recipient and presenter, and each expressed admiration for the film industry. As Meryl Streep said when she received her Icon Award, “I don’t think of myself as an icon. I couldn’t have had my career without the help of others. We don’t do it (act) alone."

Bono spoke of the importance of activism when he and The Edge accepted U2's recognition for their philanthropic as well as musical talent. Bono, who has been nominated three times for the Nobel Peace Prize, spoke admiringly of Nelson Mandela and called him “the greatest activist of them all.” Bono’s song “Ordinary Love” from Mandela: Long Walk To Freedom, is expected to be a strong Oscar contender in March.

The Awards Gala was produced by Richard DeSantis and Mary Hart hosted. Despite its success, Matzner and Houston may have a problem next year.

How can they possibly top the 2014 Gala? Come to think of it, even the Oscars might have trouble doing that.