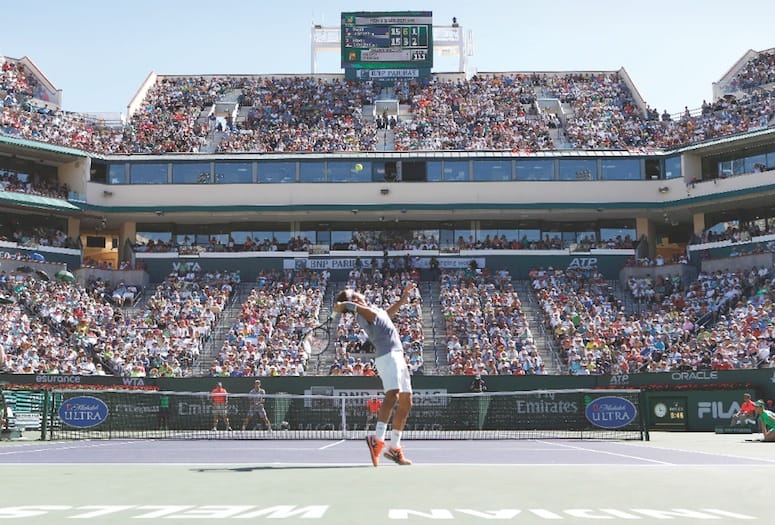 4-6, 6-3, 4-6. Although he was down two sets against the world’s fifth-ranked tennis player, Jim Courier felt confident.

“I was playing extremely well,” says the retired ATP tennis professional (he still plays Seniors), recalling his 1991 finals match against Guy Forget of France. Then, after coming back to win the fourth set 6-3, Courier found himself in a tie-breaking fifth set that culminated in his taking the Newsweek Champions Cup men’s singles title. “I remember winning match point and leaping as high as I could,” he says. “It was a transformational win for me.”

Ranked 26th going into the tournament at the Grand Champions Resort (now Hyatt Regency Indian Wells Resort & Spa), Courier rode that win, as well as the doubles title, to the French Open championship a couple of months later and returned to Indian Wells the following two years as the world’s No. 1 ranked player. He won the tournament again in 1993.

Much has changed over the years, including the name and venue of the Coachella Valley’s premier sporting event, which marks its 40th anniversary this month when it takes place March 9–22. Raymond Moore, CEO of what has been known since 2009 as the BNP Paribas Open, considered returning to his native South Africa in 1985 after serving as president of the ATP Players Association. But Charlie Pasarell, his friend and tournament director of what was then the Pilot Pen Classic, suggested he reconsider.

As Moore remembers it, “He said, ‘Instead, why don’t you come and work with me and let’s see what happens over the next two years.’”

Soon, he joined Pasarell and eight others as equal partners in ownership of the tournament. According to Moore, that lasted until the ATP Tour formed in 1989.

“The Tour asked for applications, so I went to Charlie and said, ‘Charlie, we should apply for an event on the ATP Tour,’” he recalls. “We gained a sanction, and that’s when Charlie and I became 50-50 partners of the tournament.”

He’d seen climactic moments on the courts, but Moore considers many of these off-the-court economic turns just as gripping from an operational standpoint.

Construction of Indian Wells Tennis Garden, for example, which debuted in 2000, required a sum beyond his and Charlie Pasarell’s personal reach. “So Charlie and I relinquished 50 percent of our equity to Mark McCormack and International Management Group,” Moore says. “That was a huge event.”

The next big hurdle came in the aftermath of 9/11, when Swiss sports marketing company ISL, which owned the tournament’s commercial rights, went bankrupt.

“Every sponsor fled,” Moore says. “There wasn’t a company in the U.S. that would consider sponsoring a tennis tournament in the wake of 9/11. We had to run the 2002 tournament without a sponsor. But we survived.”

“That was almost the very best thing that has happened to the tournament,” Moore says. “It immediately secured us on a financial footing. Mr. Ellison has the resources to make
dreams come true.”

Indeed, Indian Wells Tennis Garden expanded its offerings last year with an 8,000-seat Stadium 2 — which includes three restaurants and four additional practice courts. An independent study by The George Washington University pegged the gross economic impact of the 2014 tournament and expansion/renovations at more than $417.6 million. An impressive 86 percent of the 431,527 attendees traveled to the desert from outside the region.

“It’s bittersweet,” Moore acknowledges. “The bitter part is no longer owning something you have built and nurtured for years. The sweet part is you get a lot of money to give up ownership. You have to balance those things.”

Moore clearly has succeeded in that balancing act. “I love what I am doing,” he says of his role as CEO of the Tennis Garden and the BNP Paribas Open. “It’s a joy to come to work every morning.”

The name Stefanki may not be as internationally recognizable as others on that list, but it’s part of the charming history of the desert tournament. In 1985, Stefanki, the touring pro at what is now La Quinta Resort & Club, snagged a wild-card draw to play in the tournament on the courts where he worked. After making it through the draw of nationally ranked players, just before his ultimate match against David Pate, he thought, “I don’t want to just make it into the finals.”

Despite his home-court advantage, Stefanki had cause to be nervous. He knew Frank Sinatra was in the stands, as well as tennis icons Pancho Gonzales, Alice Marble, Ellsworth Vines, and Jack Kramer. In the first game, he lost serve and four straight points. But the crowd lifted him.

“Everywhere I looked was a friend — Tom Gorman, Tommy Tucker, Charlie Pasarell. Elly Vines was a neighbor I had lunch with a lot across the street at La Quinta Country Club. They were all rooting for me.”

Stefanki, the wild-card champion, later coached onetime No. 1 world player Andy Roddick. “We had a running joke,” he says, “because it’s the only tournament he never won in North America.”

Like Stefanki, Tournament Director and COO Steve Simon holds a place in his heart for the La Quinta site, which was the tournament’s venue after five years at Mission Hills Country Club.

“I was a sponsor, working for Adidas, when I was introduced to the tournament at La Quinta hotel,” he says. “That’s still one of the most idyllic settings of the whole valley. When the tournament moved to the Grand Champions, we wondered why. When we got there and saw that beautiful resort and large stadium, it all made sense. Still, it was [also] a very intimate facility.”

Moore agrees: “The Grand Champions stadium had a second court, which was the clubhouse court. Everyone could get very close to the players. You could almost feel them sweating on you.”

Now, fans can see the players sweating, thanks to 40 video walls at the Indian Wells Tennis Garden.

“We went from being a terrific event in a very quaint environment to a larger stage by building the Tennis Garden,” Simon says. And while pragmatists might consider $10 million in prize money plenty of incentive, that would be shortchanging the impact of some of the other efforts.

“We have been blessed with tremendous support from the players in that they come here year after year,” Simon says. “We have enhanced our practice-court experience and added seating on a number of the practice courts and video walls on every practice court. We also enhanced the players’ area, locker rooms, and dining areas and have eight new 9-by-5-foot video walls in the main stadium. We are working on more initiatives for 2016 and beyond.”

Over his almost 30-year span, one of the on-court highlights for Moore was the 1995 final between Sampras and Andre Agassi after rain postponed the match to 4 p.m. on Monday.

“It was sold out,” he says. “Frank Sinatra, everyone requested tickets. It was a great final.” Sampras, who subsequently became a resident at Bighorn Golf Club in Palm Desert, won 7-5, 6-3, 7-5.

Simon also considers that match noteworthy, but recalls another year at the Grand Champions venue when the desert’s typically sunny skies succumbed to a tempestuous Mother Nature. It was around the time of new formulas for court surfaces in lieu of lead-based paints.

“We had a rainstorm and all the lines on center court were beginning to lift,” he says. “We spent the night with X-Acto knives, Super Glue, and hair dryers, reapplying the lines to the court for the next day.”

These days, Simon can concentrate on the players — and he’s got his eye on several this year.

“The top players on the men’s side will remain what you could call the current ‘cast of characters’: Nadal, Federer, and [defending champion] Djokovic. I think the new face to watch is Kei Nishikori. On the ladies’ side, you will have Maria Sharapova. But there are certainly some new players we will be seeing — newcomers like Simona Halep and Eugenie Bouchard. I think they’re two of the up-and-comers, and they will be accompanied by [Agnieszka] Radwanska and [Petra] Kvitova, who are coming on as highly ranked players and certainly will be leaders. The other one, coming back from injury, is Victoria Azarenka.”

Flavia Pennetta beat Radwanska — who was battling a knee injury — last year for the title.

“She was a surprise; she wasn’t one of our highest seeds,” Simon says. “She will be back as the defending champion, but I don’t expect her to be one of the top seeds of the event.”

Perhaps one of the attractions in sports is that there are surprises, up-and-comers, and masters who not only make the record books but also are remembered and loved by fans — athletes like Jim Courier, who retired in 2000 after playing in the Indian Wells Tennis Garden’s debut tournament. Now living in Orlando, Florida, he returned to the desert last year to inaugurate Stadium 2 in a charity match against John McEnroe and beat his former rival in singles and doubles.

“The [Indian Wells Tennis Garden] facility is second to none outside the Majors,” Courier says. “The year it came into being was a moment where the bar was raised for other tournaments around the world. When a tournament like this commits to putting [electronic line calling] on all match courts, I think even the Grand Slams feel the pressure.

“In the late ’80s when I started playing in the tournament, it was one of the best venues in tennis,” he adds. “There’s very much a similar vibe now, though the venue is bigger. It was always and continues to be a spectacular place and time of year. The joy that you see in the fans is not surprising.”

The BNP Paribas Open, March 9-22,  in Indian Wells. For more information or to purchase tickets, visit www.bnpparibasopen.com or call 800-999-1585.