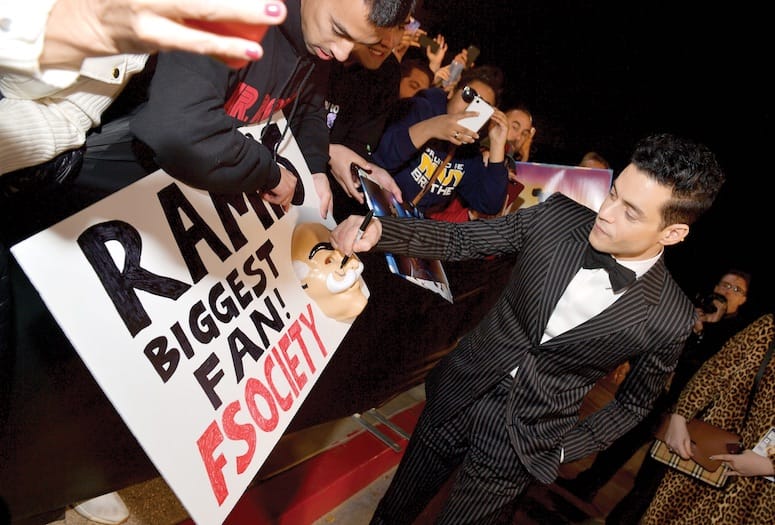 “Coming and winning at the Kennel Club of Palm Springs is really considered a prestigious win,” says Trish Williamson, assistant show chair for the annual canine competition at the Empire Polo Club in Indio. Part of the reason for that clout is the show’s sheer size: “We’re usually the biggest show west of the Mississippi,” Williamson explains. Last year’s attendance count clocked in at 12,000 people, and the affair has an economic impact of about $2 million.

Williamson and her fellow Kennel Club members spend the entire year preparing for around 11,000 dogs to trot their way past the judges’ booths. Spectators can see specialty, breed-specific, and all-breed conformation trials (in which judges determine which dogs most closely meet the top standards of their breeds). There’s also obedience trials and rally courses — plus some special attractions. “In one of the rings, we’ll have the four- to six-month-old puppies,” Williamson boasts. “It’s their first real taste of showing. You can see right away, in some cases, the stars of the future in that puppy class.”

Though she’s spent the last 13 years on the administrative end, Williamson also knows what life is like inside the pen. She and her standard poodles once competed in agility and conformation trials here in the desert. “It’s a lot of hard work,” she says. “But it’s very rewarding in the long run. And I feel I always learn something in working with my dogs.” kennelclubpalmsprings.org 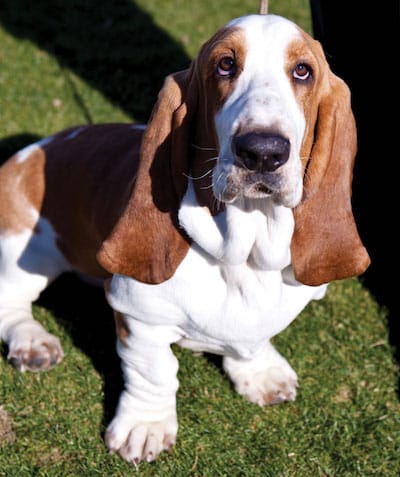 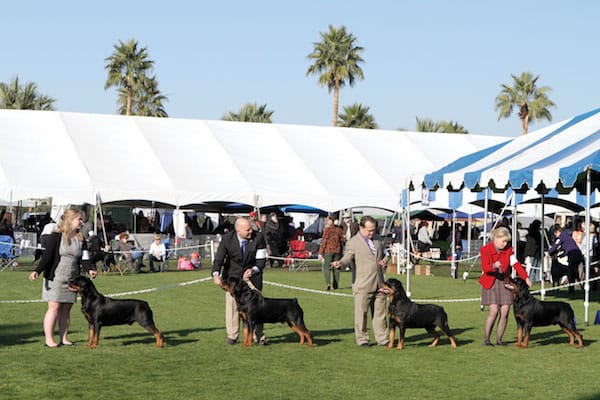 The shows feature many of the 193 different breeds recognized by the AKC.

Founded in 1990 by then-mayor Sonny Bono as a tourism and cultural initiative, the film festival has grown to attract more than 135,000 attendees and screen more than 200 films annually at locations throughout Palm Springs and Cathedral City. Keep your eyes peeled for celebrities around town. psfilmfest.org

• READ NEXT: 10 Can't Miss Films to See at the Palm Springs Film Festival.

With striking street art and a string of galleries that covers several blocks, renowned shopping street El Paseo is just as much an aesthete’s paradise as it is a fashionista’s. Visit more than 15 galleries and attend exhibition openings and artist receptions during the area’s monthly art walk. elpaseoartwalk.com

Embrace Virgil’s adage that “the greatest health is wealth” with a festival day at Palm Desert Civic Center Park, where a kids zone, food trucks, live music, a blood drive, pet adoptions, and group fitness including yoga and Zumba provide for the whole family’s bodies, minds, and souls. livewellfestival.org

More than 100 artists vend paintings, ceramics, jewelry, and more in Old Town La Quinta, a charming collection of restaurants and boutiques designed to reflect the lively but peaceful city centers of Europe and Northern California. oldtownlaquinta.com

Named after Fleetwood Mac’s 12th album Tusk, this tribute group makes “Dreams” come true for fans of Stevie Nicks, Mick Fleetwood, Lindsey Buckingham, and John and Christine McVie. “Go Your Own Way” to the McCallum Theatre in Palm Desert to hear sounds-just-like-them covers of the band’s most iconic hits. mccallumtheatre.com

Desert local Jack Jones takes to the McCallum Theatre stage to perform the 1960s tunes that scored him two Grammys. Those who watched The Love Boat will recognize Jones as the voice of the show’s cheery theme song (and as an occasional guest star). mccallumtheatre.com

In 1981, Delaware–born rocker George Thorogood and his band went on a whirlwind tour of all 50 states — in just 50 days. While the “Bad to the Bone” singer’s schedule isn’t quite so rigorous nowadays, he still puts on a killer show, including one at Fantasy Springs Resort Casino in Indio. fantasyspringsresort.com

It’s the D-O-double-G … live in concert at Agua Caliente Casino in Rancho Mirage. Among the rapper’s many past area appearances is a surprise performance of “Straight Outta Compton” during an N.W.A. reunion at Coachella in 2016. aguacalientecasinos.com 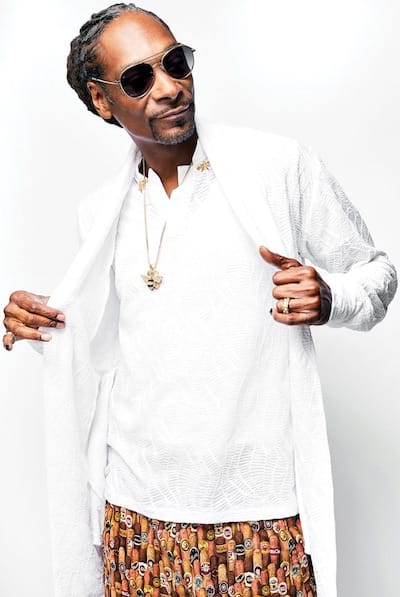 Though they’re known for the 1976 hit “You Don’t Have to Be a Star (To Be in My Show),” their set at the McCallum Theatre is jam-packed with star power. This sleek-voiced duo met when McCoo joined Davis’s group The 5th Dimension in 1967; they’d go on to marry two years later and become the first black married couple to host a network TV show. mccallumtheatre.com

Political parody band Capitol Steps was founded in 1981 by four U.S. congressional staffers. They continue their nearly 40-year legacy of poking fun at D.C.’s foibles at the McCallum Theatre in Palm Desert. mccallumtheatre.com

Palm Springs’ proximity to Hollywood made the city a go-to destination for midcentury stars. The McCallum Theatre in Palm Desert honors some of the desert’s most iconic frequent flyers with this musical extravaganza, in which tribute artists emulate Elvis Presley, Mary Martin, George Burns, and others with the spirited backing of a 13-piece band. mccallumtheatre.com

This official PGA event (held, naturally, at PGA West in La Quinta) blends the excitement of a professional golf showdown with the energy of a desert music fest. Separate concerts by Stevie Nicks and Luke Bryan follow gameplay on Friday and Saturday.
theamexgolf.com

Harvey and her band of merry musicians infuse the folk tradition of soulful storytelling and mournful ballads with rock beats and bluesy vocal growls in their high-energy show at the McCallum Theatre
mccallumtheatre.com 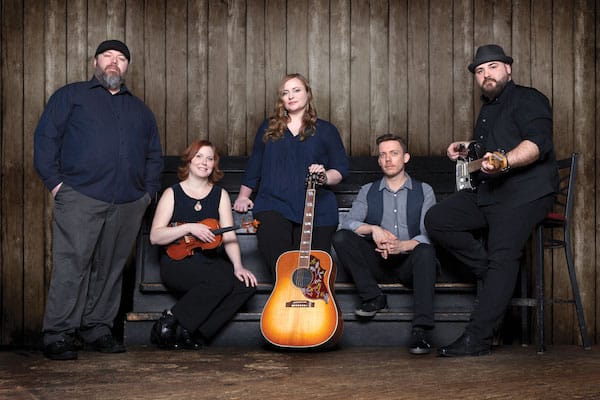 This quartet’s name is self-explanatory: they’re guys who play piano. What makes them remarkable is their talent for innovating radio hits with classical techniques, as in their blend of David Guetta’s “Titanium” and Gabriel Fauré’s 1887 composition “Pavane.” Hear them live at the McCallum Theatre. mccallumtheatre.com 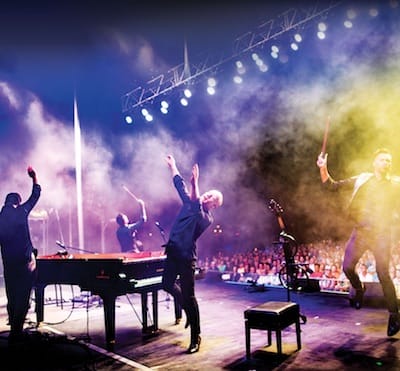 Motown is coming to town (specifically, to Fantasy Springs Resort Casino in Indio). Both The Temptations and Four Tops occupy spots on Rolling Stone’s list of the 100 greatest artists of all time, with the former coming in at 68 and the latter nabbing number 79. fantasyspringsresort.com

The Côte-d’Or’s complex red stars at this wine festival at the Ritz-Carlton, Rancho Mirage. More than 30 pinot noir makers and a number of top local chefs pour and pair at the fest, and there’s also classes to up the expertise of aficionados in attendance. palmspringspinotfest.com

The NBC show that thrust virtuosos like Jackie Evancho and Lindsey Sterling into the spotlight offers desert dwellers the chance to stake out their spot as a season 15 competitor with auditions at Morongo Casino Resort & Spa in Cabazon. agtauditions.com

This slick R&B group forged their path to fame in 1989 when they snuck backstage at a concert to give New Edition’s singer Michael Bivins a taste of their talent. Hear the chart-toppers that followed, including the 1992 No. 1 “End of the Road,” at Agua Caliente Spa Resort Casino in Rancho Mirage. aguacalientecasinos.com

These Chinese athletes hold the Guinness world record for — wait for it — tallest human chair stack. See similarly stunning feats in their show at the McCallum Theatre. mccallumtheatre.com

More than 200 artists sling paintings, sculptures, pottery, glassware, and more at this local-favorite festival at the Empire Polo Club in Indio.  fb.com/southwestartsfestival

It’s a woman’s world at this short-film festival at Palm Springs High School’s Richards Center for the Arts. All the movies featured — which range in style from brief but powerful documentaries to colorful animated films — were written and directed by women and center on the experiences of women and girls. Plus, festival proceeds benefit local gal-centric nonprofits. lunafestpalmsprings.com

Now in its 22nd year, the Gardens on El Paseo’s charity concert series has drummed up more than $1 million for local nonprofits with eats, sips, and songs on the lawn in front of Sak’s Fifth Avenue in
Palm Desert. This month’s show features classic rock outfit JSK Band and benefits the Bighorn Golf Club Charities, thegardensonelpaseo.com

Renée Taylor is an Oscar-nominated screenwriter and an actress known for playing Fran Fine’s mother Sylvia in The Nanny. She’s also an avid collector of celebrity diet tips (and anecdotes), a passion she shares with McCallum Theatre audiences in her show My Life on a Diet. mccallumtheatre.com

Coachella Valley Symphony: The Best of Stage and Screen / Jan. 26

Winter never really comes to the Coachella Valley — but that doesn’t mean the Coachella Valley Symphony won’t blow ticketholders at the Annenberg Theatre away with a medley of tracks from Game of Thrones. There’re also songs from Aladdin, plus some Beethoven for good measure. psmuseum.org 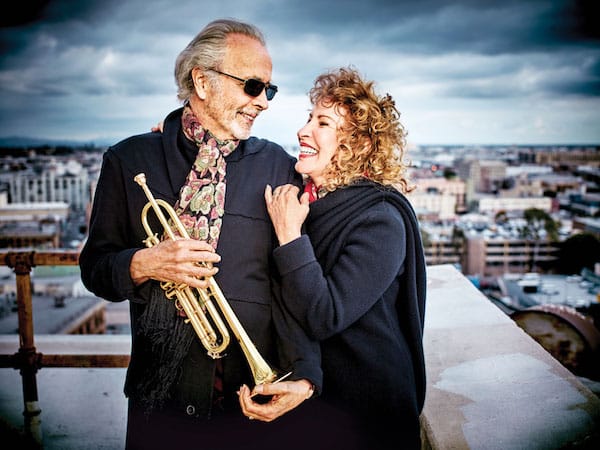 Author Mitchell’s resistance to tying the knot with his partner Daniel has heartbreaking consequences in this nuanced family drama, presented by nonprofit production company Dezart Performs at the Pearl McManus Theater in Palm Springs. dezartperforms.org

This revue musical pays R-E-S-P-E-C-T where it’s due: the groovy girls that defined 1960s pop. Book it to the Indio Performing Arts Center for high hair, high notes, and songs by iconic women artists like Aretha Franklin, Janis Joplin, and Diana Ross. dtworks.org

The writers of My Fair Lady penned this classic King Arthur musical. Take your own seat at the round table at Palm Canyon Theatre in Palm Springs. palmcanyontheatre.com

Desert Rose Playhouse in Rancho Mirage lassoes in audiences with this cheeky, modern take on the American western, in which an east coast detective disguises himself as a woman for an investigation and finds himself fighting crime — and falling in love — in the all-men gold rush town of Snake Pit Gulch. desertroseplayhouse.org

A hapless fictional theater group takes Murphy’s law — “anything that can go wrong will go wrong” — to gut-busting new proportions at the McCallum Theatre in Palm Desert. mccallumtheatre.com

The Coachella Valley Repertory Theatre worked with Ballroom’s original authors to breathe new life — including three brand-new songs and several others that were previously cut before they reached the stage — into the 1976 Broadway musical about love at a dance hall. cvrep.org

Waste away an evening at the McCallum Theatre, where a dedicated researcher, a playboy bartender, and their friends find romance, treasure, and their long-lost shaker of salt during a weeklong island romp in this lighthearted jukebox musical featuring Jimmy Buffet songs. mccallumtheatre.com

Elizbeth Fuller and Joel Vig’s harrowing experiences in Moscow as they attempted to adopt a little girl provide the true-life basis for this new play. See the world premiere at the Pearl McManus Theatre in Palm Springs. detctheatre.org 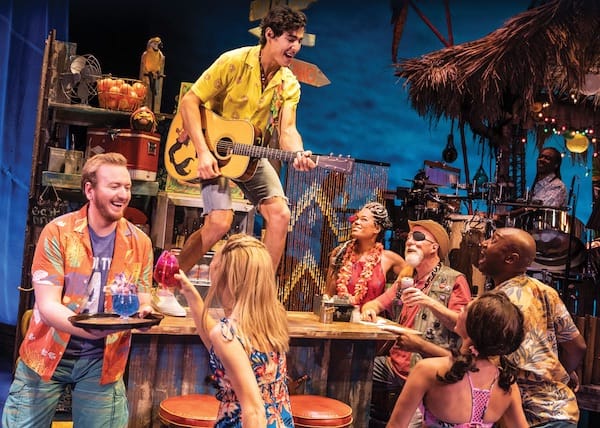 Fifty years after the uprising at the Stonewall Inn in New York City that kickstarted the fight for LGBTQ rights, the Palm Springs Art Museum presents this beautiful exhibition of photographs and collages exploring the power of queer intimacy and touch. psmuseum.org 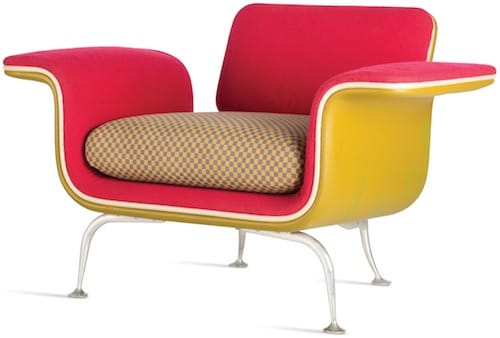 Reach for the Sky: Tradition + Inspiration / Through June 7

A striking 30-foot-tall totem pole has greeted visitors to Walter and Leonore Annenberg’s Rancho Mirage estate, Sunnylands, since 1978. Carved by indigenous artist Henry Hunt and later restored by his son Stan and grandson Jason, the totem pole serves as the focal point for a new exhibition featuring work by the Hunts and American sculptor Herb Alpert. sunnylands.org