The Abernathy House, designed by William F. Cody in 1962, is just one example of the modernist residences that has put Palm Springs on the midcentury map.
PHOTOGRAPH COURTESY MODERNISM WEEK

With a rich history that traces back millennia to Indigenous Cahuilla camps built around the area’s natural hot springs, the Coachella Valley has evolved through every era. There was, of course, the midcentury architecture boom and the old Hollywood heyday. Rewind a little, and you’ll hit the gangster moments of the 1930s, the dude ranch days, the gold rush. Fast-forward to the golf boon and rise of other professional sporting events, music festivals, and major cultural happenings that have put our desert on the international stage.

Impress the guests at your next cocktail party with your knowledge of Greater Palm Springs — then and now. Here, we recount 45 fun facts about the desert.

According to Cahuilla legend, Mount San Jacinto was the birthplace of humanity. A 2018 archaeological dig in the city dates the local Agua Caliente Band of Cahuilla Indians civilization back at least 8,000 years.

Some of the world’s best midcentury architects selected Palm Springs to be the canvas for their modern visions. Albert Frey, John Lautner, E. Stewart Williams, Richard Neutra, and Donald Wexler are just a few who designed buildings that remain standing today.

Ever wonder what it would be like to swim in a celebrity’s pool? Here, you have the chance. Frank Sinatra’s former Twin Palms Estate in Palm Springs — complete with piano-shaped pool — is among many celebrity homes available as vacation rentals and for weddings and events. 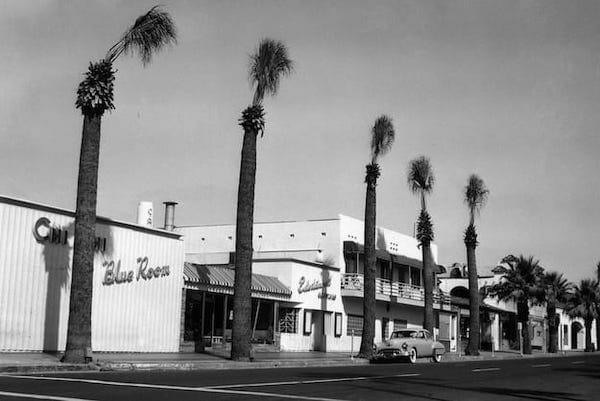 In the summer of 1949, more than 300 palm trees were planted in downtown Palm Springs along Palm Canyon Drive as part of a beautification project. That fall, Palm Springs hosted a barbecue to celebrate the occasion.

Desert Hot Springs’ first official homesteader was a 30-something legal secretary named Hilda Gray. Friends with Cabot Yerxa, she lived alone and is described as a petite woman who knew her way around a revolver and the land better than most men. 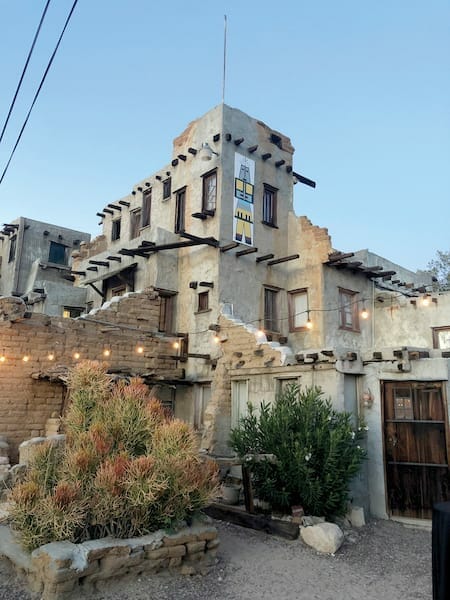 When Yerxa tapped the hot and cold aquifers on his property, he dubbed the site “Miracle Hill.” Warmed by geothermal activity thousands of feet underground, the springs can reach 180 degrees. In 1937, the first scientific analysis affirmed their therapeutic value.

Through the 1940s and ’50s, dude ranches emerged in the desert. Bar-B-H Ranch was a Tinseltown favorite. Go figure: It was co-founded by the first ever Oscar winner for Best Picture. Today, it is a community with 11 modern estates.

Five energy sources align in Desert Hot Springs — the water, the wind, the sun, the mountains, and the fault zone. For this reason, the area is said to occupy an energy vortex, and some visitors report experiencing physical, mental, or spiritual healing.

Home to sizable solar and wind farms, the city is a leader in renewable energy. So are its resorts. In 2015, Two Bunch Palms became the first carbon-neutral resort in the United States after installing a 3.5-acre solar farm. 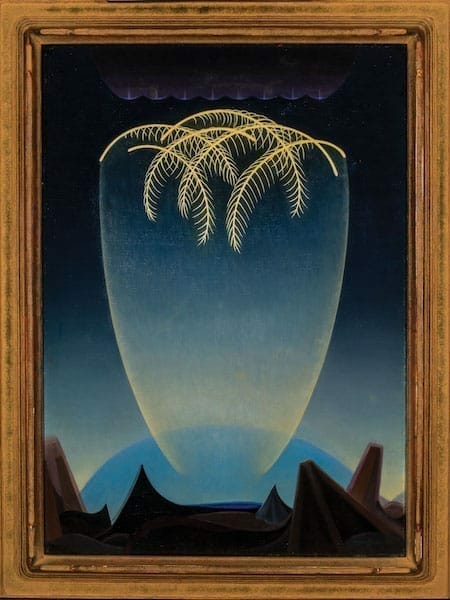 PHOTOGRAPH COURTESY PHOENIX ART MUSEUM
Agnes Pelton was a groundbreaking artist who made her home in Cathedral City.

Designed by artist Jennifer Johnson and architect Reuel Young, this interactive water feature at Civic Center Plaza is made of adoquin stone from Mexico that was carved by families who have sculpted stone for more than 600 years.

Home to a variety of industries ranging from tech to creative arts to healthcare, the city also happens to be among the state’s most cannabis friendly. It is one of only a few cities in California that permit cannabis consumption lounges.

Among the many projects bringing new life to the downtown district is the state-of-the-art Community Amphitheater, which hosts regular open-air concerts and cultural events. Instantly recognizable, its sharply angled roofline was inspired by origami. 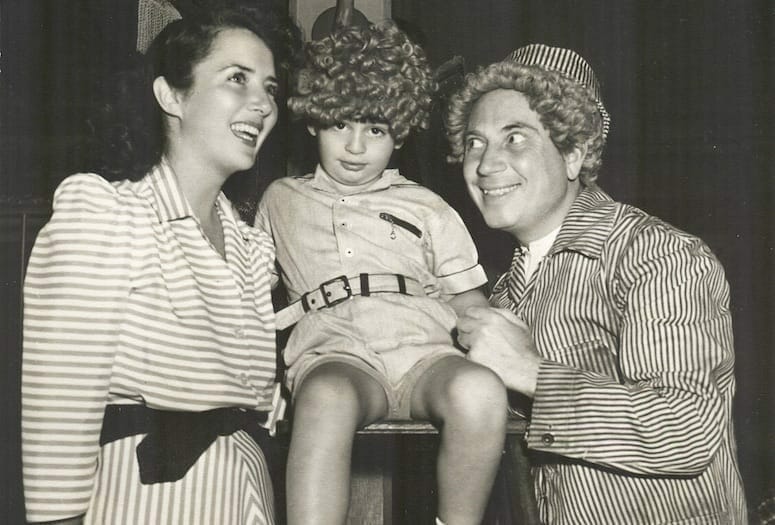 Rancho Mirage’s history traces back to the unbridled gold rush days, as prospectors routed through the desert in search of a score. By 1915, their wagon trails had been supplanted by scattered ranch homes and Bradshaw Highway, now Highway 111.

The only parking meter in Rancho Mirage was installed by friends of Jack Benny in front of the comedian’s unit at Blue Skies Village. Still around today, the mobile home park was founded by Bing Crosby in the 1950s as a getaway for himself and his friends.

In the late 1960s, Bob and Dolores Hope donated 80 acres of land to build the now world-renowned Eisenhower Health medical facilities, as well as the Betty Ford Clinic.

Comedian and mime icon Harpo Marx once played a round of golf at Tamarisk Country Club in Rancho Mirage without wearing a stitch of clothing. (It was August!) He had moved with his family to the city in 1956 and was among those who founded the country club.

The first Ford Thunderbird rolled off the assembly line in 1955. The sporty vehicle was reportedly named after Rancho Mirage’s Thunderbird Country Club, where Ford Motor Company chairman Ernest Breech was a member. 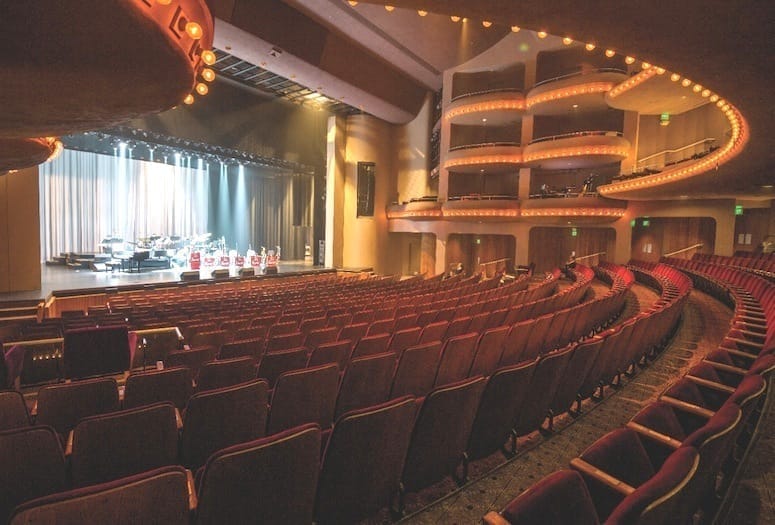 Palm Desert became the first city in Riverside County to adopt a public arts ordinance in 1986, requiring that developers showcase artwork in some way in their public projects. These installations include the sculptural works that are displayed on the median along El Paseo.

In 1979, Los Angeles Lakers owner Jerry Buss began hosting training camp for the basketball team in the Coachella Valley. They used the courts at College of the Desert on and off during the 1980s and ’90s.

The McCallum Theatre opened in January 1988 with a nationally televised all-star tribute to its champion, Bob Hope. Sarah Brightman sang a song from Phantom of the Opera a month before the production debuted on Broadway.

Spanning 425 square miles, the Santa Rosa and San Jacinto Mountains National Monument was designated as a national scenic area in 1990 and a national monument in 2000. The visitor center is located in Palm Desert.

In 1870, Riverside County built what became known as the “county well” in Indian Wells. It was about 100 feet south of the early Cahuilla camp, which had been abandoned. The well remained one of the area’s only established watering points for four decades.

Nineteenth-century prospectors in pursuit of gold often stopped at an Indian Wells stage station called Old Rancheria to rest their horses. It was known to be a dangerous pit stop with frequent robberies and shootouts.

Opened in 2000, the Indian Wells Tennis Garden boasts the second-largest stadium in the world. The facilities are also regarded as being among the most beautiful. With five each, Roger Federer and Novak Djokovic share the record for most titles won here. 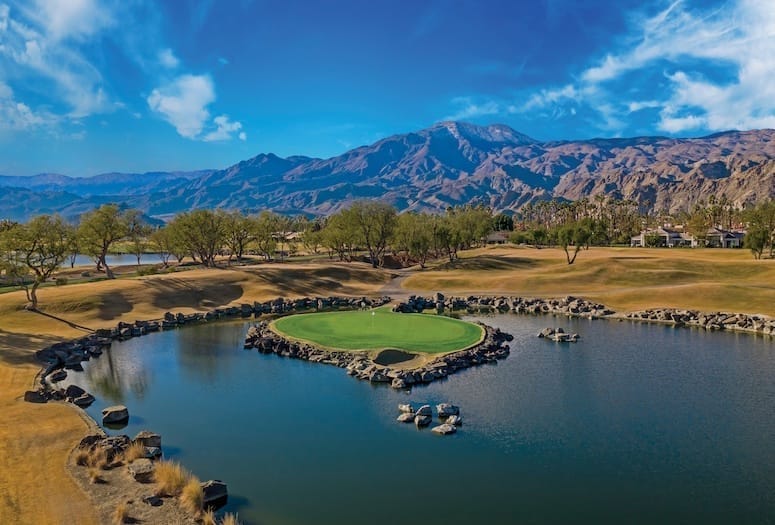 PHOTOGRAPH COURTESY PGA WEST
La Quinta has its own version of “Alcatraz” at PGA West.

La Quinta is one of only two cities in the nation to be named after a resort. (The other is Beverly Hills.) In Spanish, “la quinta” refers to an estate or a country home that’s often surrounded by small cottages, which is fitting for this secluded retreat.

When Walter H. Morgan opened La Quinta Hotel, the property featured 20 casitas, an open-air dining room, and the area’s first nine-hole golf course, open to the public for a daily green fee of only $1.

Dubbed “Alcatraz” for its island green, the 17th hole of the Pete Dye–designed Stadium Course at PGA West is touted by golf pros as being among the sport’s most diabolical. When it debuted in the 1980s, a Los Angeles Times writer quipped, “You need a camel, a canoe, a priest, and a tourniquet to get through it.”

One of the largest rock slides in the country happened in La Quinta at Martinez Mountain. Accessible by hiking trails, it is believed to have been caused by earthquakes around the years 800, 1250, 1500, and 1680.

Legendary entertainer Merv Griffin built his dream home in La Quinta when he was 62. The Moroccan-themed estate, set on 40 acres with a pond and paddle boats, can be booked for weddings, events, and weekend stays. 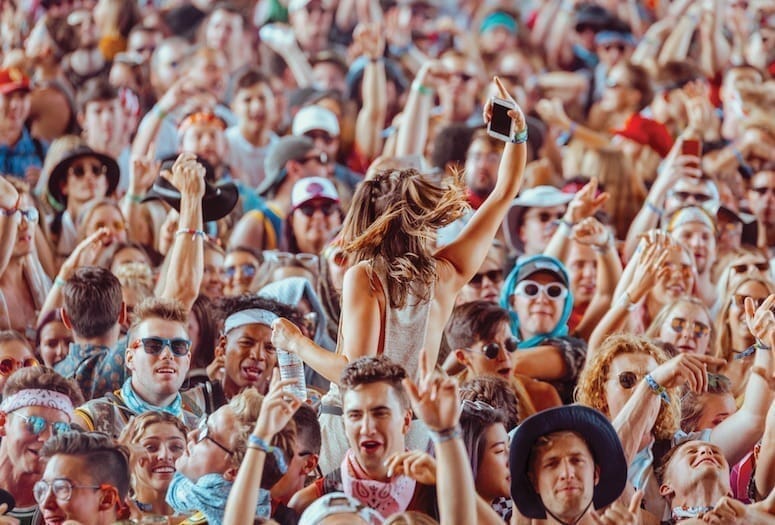 Downtown revitalization efforts include a gathering area at Smurr Street and Miles Avenue known as the Outdoor Living Room, host site of frequent community events including live music and local eats every second Saturday of the month.

Regarded as the winter polo capital of the world, Indio joined the polo scene in the ’50s and has hosted major global tournaments including the 2015 Townsend Cup, in which the U.S. defeated England.

During the Civil War, the U.S. Army used camels as pack animals for military in Southwestern states. The idea didn’t last, and most were sold at auction. Many came to Indio in the early 1900s, participating in races at the Date Festival, a tradition that continues today.

Agriculturalists imported date palms from the Middle East and North Africa in the late 1800s after identifying similarities between the desert climates. At the turn of the 20th century, the USDA set up its Date Station here to study the fruit, which remains a top crop today.

The inaugural Coachella festival occurred in 1999 at the Empire Polo Club. Tickets were $50 per day, and headliners included Beck, Tool, and Rage Against the Machine. These days, an average of 250,000 people attend the event each weekend. 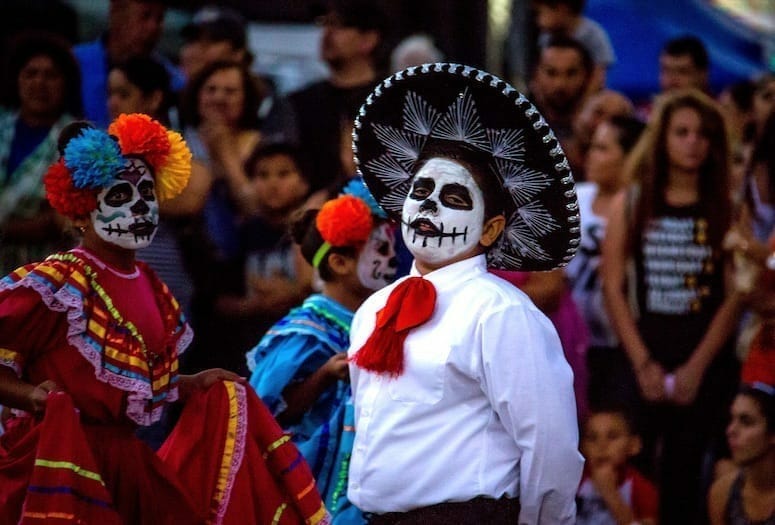 Coachella was supposed to be named Conchilla, which means “little shell” in Spanish — a nod to the shells that can still be found in the sand since this area was under water thousands of years ago. When the name was misspelled on a map in the early 1900s, it stuck.

The first Catholic church developed between the city of Banning and Arizona was built in the 1920s in Coachella. Our Lady of Soledad, as it is known, moved to its current site in the 1970s.

The All-American Canal, an 82-mile aqueduct connecting the Colorado River with cities along the California-Mexico border, also supports farm fields in the East Valley. It reached the area in 1949, when the Coachella Extension was completed.

Immigrants have been politically represented in Coachella since the first City Council formed in 1946. In ’84, the city elected the Coachella Valley’s first Latina mayor. Local Latino politicians have gone on to serve in the State Assembly and House of Representatives.

Among Coachella’s most exciting annual events is Run With los Muertos. The 5K nighttime fun run and block party takes place every November, timed around Mexico’s Day of the Dead, an observed holiday that honors loved ones who have passed.