Theresa Sama describes herself as an “avid outdoor hiking junkie,” so it was only natural that 8-year-old Sammy, her Spaniel Doxie (mixing Dachshund and Cocker Spaniel), would tag along when she hits the trails around the Coachella Valley.

Sounds simple enough, but actually not every trail in the Coachella Valley is designated for dogs. In fact many are not. The Bump and Grind Trail in Palm Desert is one of the most popular trails where dogs have been seen accompanying their owner but are not allowed by the city of Palm Desert. Some Internet links spell that out, noting only service dogs are allowed on the Bump and Grind while others fail to mention anything.

When she first began hiking in the valley, Sama spoke to park rangers and fellow hikers and queried what trails she could take Sammy with her. She also found alltrails.com to be a good source, which displays a series of highlight boxes once you click on a trail that reveal its characteristics, such as bird watching, running, or no dogs. 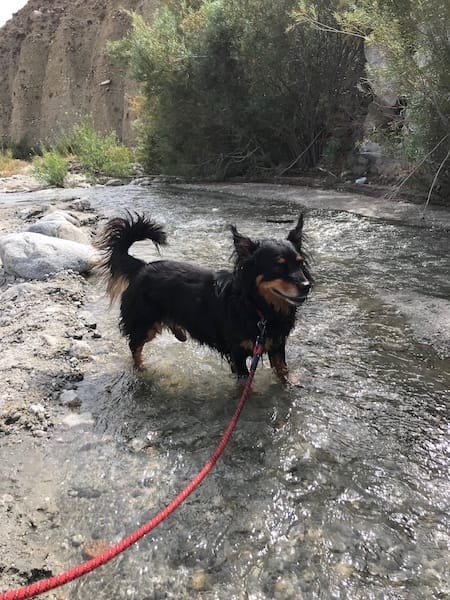 PHOTOGRAPH COURTESY THERESA SAMA
A few run-ins with wildlife while hiking taught Theresa Sama to keep  her dog, Sammy, leashed at all times.

To help give dog owners a specific list of dog friendly trails, a group at the University of California-Riverside in Palm Desert has researched six in the Coachella Valley that emerged from a planning meeting for the California Naturalists program.

“It was important to choose trails where people are able to take their dogs out into nature, but don’t create a conflict with wildlife,” says Dr. Cameron Barrows, an environmental researcher at UCR Palm Desert. “That wildlife conflict was the primary issue why those trails were considered.”

“Due to the drought the wildlife is already stressed,” Cameron Barrows adds. “They see the dog as predator and will run away. The wildlife already has problems finding enough water and food out there. They do not know that the dog on the leash is no threat. Running away causes more physical stress for them. Trails with less wildlife interference are always better for hikes with dogs.”

Barrows’ son, Colin, a Coachella Valley naturalist who works with the CactustoCloud Institute in the valley, wrote the descriptions for the trails. He hopes the list provides positive reinforcement to hikers who wish to bring their dog with them. “A lot of times people run into trouble with dogs on trails that are really steep, where there's not room for people to pass, so we only picked wide and relatively flat trails that are easy and a lot of times some of those trails have like doggy bags and that kind of stuff available, too,” Colin Barrows says.

Here are the six dog-friendly hiking trails in the Coachella Valley. (Trail photos by Colin Barrows). 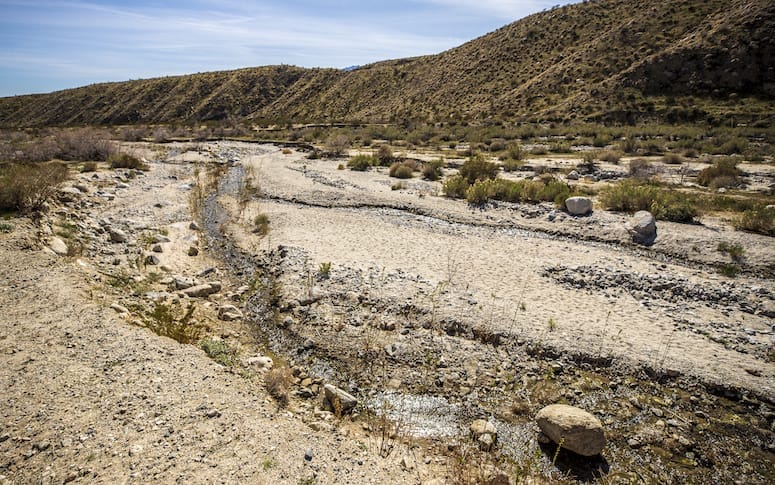 From Interstate 10, take Highway 62 north to Mission Creek Road. Drive on the dirt road about 2 miles and park at the gate.

Hikes starting from the gate are approximately a 7 mile round-trip. 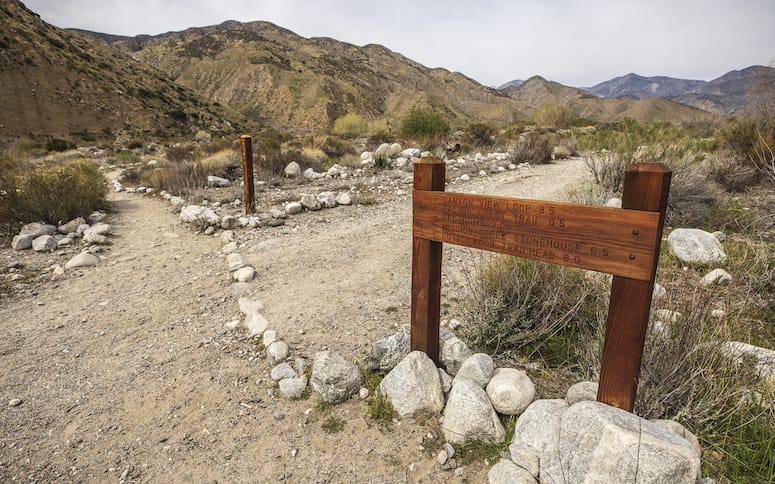 Trailheads are only accessible on Whitewater Canyon Road and parking is available. Preserve hours are 8 a.m. to 5 p.m.

Different trails with different length and difficult levels are available. 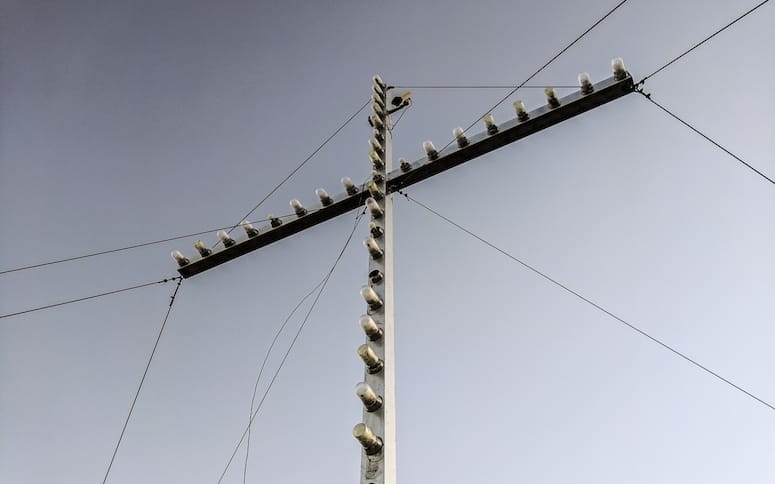 Take Highway 74 west in Palm Desert, right on Thrush Drive, left on Thrush Road. Go over the bridge at the canal and turn right. 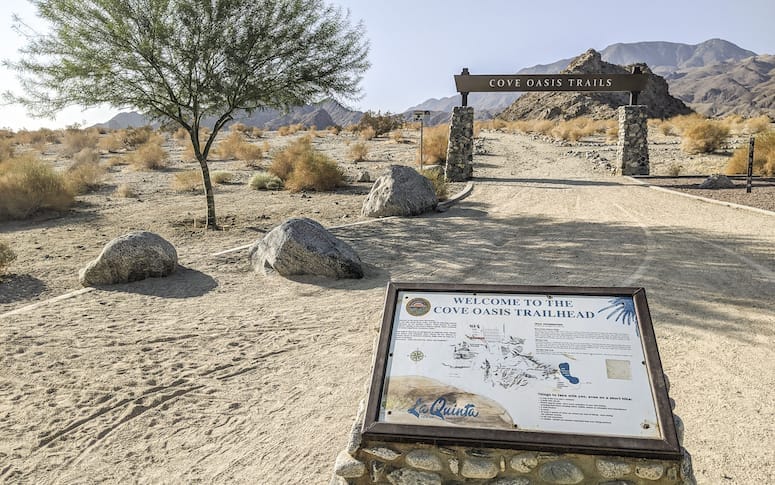 Access to the Cove Oasis area is located on Calle Tecate.

Different trails are available from 2.5 miles up to 17 miles. 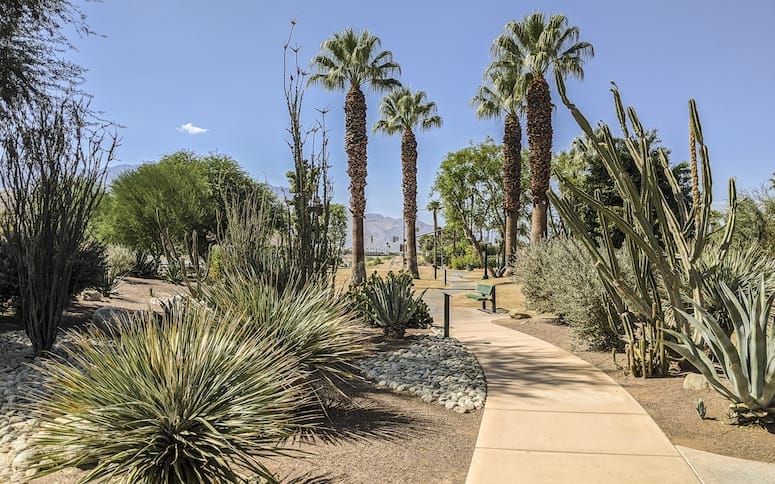 Trail is 2.5 miles long and offers scenic views and is good for all skill levels. 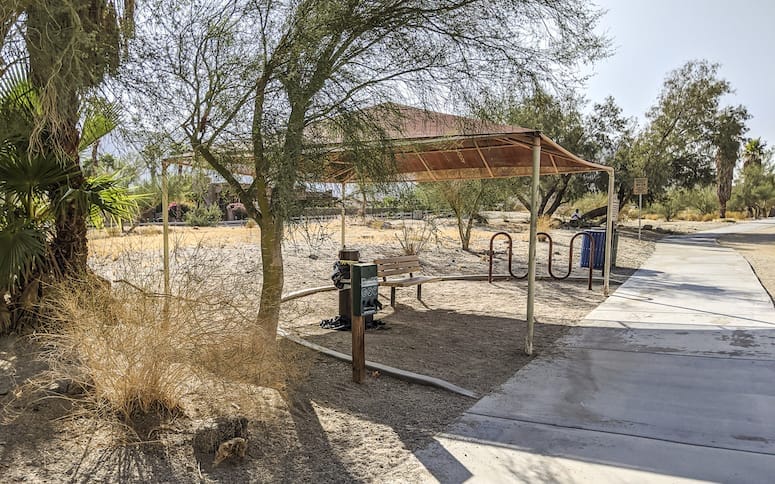 Tips for hikers with dogs

Theresa Sama: “Always, always keep your dog on a leash. I’ve had coyote encounters with my dog where I've had to chase the coyotes away. They appear out of nowhere and they are just a matter of two or three feet from your dog, ready to attack. Once my dog saw a jackrabbit and he took off after it. I thought I had lost him for good. He went like three hillsides over and he wouldn't listen to me. After that he went on the leash and he doesn't come off the leash.” 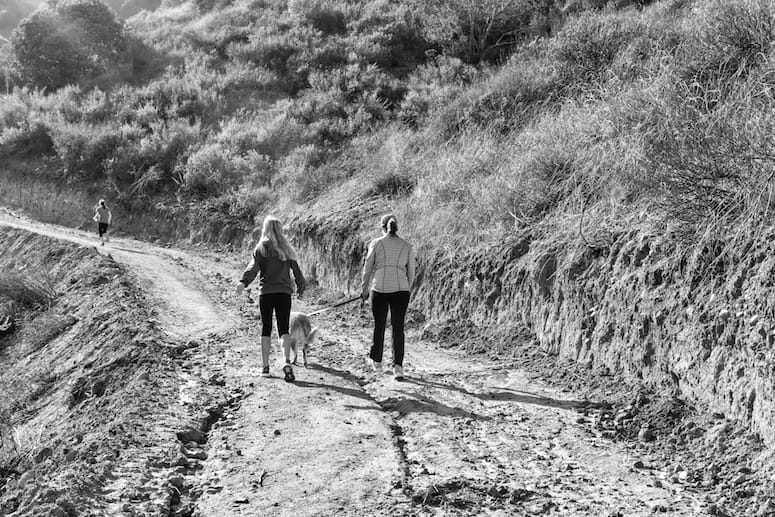 When you run into wildlife on a trail

Cameron Barrows: “The main thing is to keep the dog away from the snake. It's important to keep the dog on the leash. That's the safest thing you can do. If you allow your dog off the leash, then there is a really good chance that they could encounter a snake. If they aren't trained to avoid snakes, which some dogs can be, they'll get too close. The snake is just reacting to protect itself. It's trying to keep this potential predator away. It'll rattle at first, but if the dog isn't trained, it could strike them. That puts the dog at risk of being very, very sick. It could kill the dog, but at least it would be an expensive vet or hospital visit for the dog. If people keep the dog on the leash, then you can avoid that altogether.”

Theresa Sama: “We've run past rattlesnakes that didn't even rattle. And, of course, we're running and going fast, both of us, and we just passed right by a snake. And I'm just like, "Oh my God. Was that what I thought it was?" Circled back and sure enough, it was. And it was just along the trail; they blend in with the sand, so they are very hard to see.

Cameron Barrows: “You should be very conscious of the fact that your legs are big and long, and a small dog especially has to take maybe six or seven steps for every one step that you take. You should pay attention to your dog's condition, and if they start panting or start slowing down, you've probably gone too far at that point. And if you can pick up the dog and give him a rest, that's a good thing. Make sure at that point that they're getting fully hydrated and giving them water. And I think with a small dog, you should take shorter hikes. Larger dogs can take longer hikes. But it always depends on the condition of the dog. If your dog is not used to longer hikes, start it slow and build up the dog’s condition. Then you can expand the duration of the hikes slowly.” 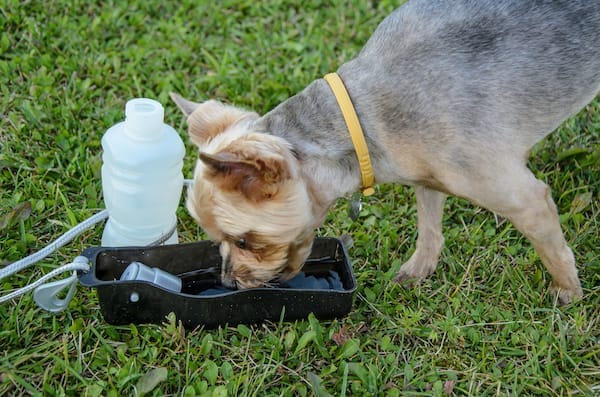 Theresa Sama: “I pull my dog off the trails by March and then he doesn't go back on until October. It doesn't mean that we stop exercising. We just go early morning and stick to the wide service roads or the trails around our complex and on the roads.”

Cameron Barrows: “I think it's the same for people as it is for dogs. Avoid the hours during the day when the temperature rises and is highest in the afternoon. Wait with an afternoon hike for the sun to go down. When you live closer to the mountains, wait until the sun is behind the mountains. Check the temperature of the surface. If you can’t keep your hand or bare feet on the ground because it is still too hot then your dog shouldn’t walk there either. I think the best way to do it is either early morning or after the sun just goes down behind the mountains in the afternoon.”

• READ NEXT: Enjoy a People Hike in the Badlands Near Indio.