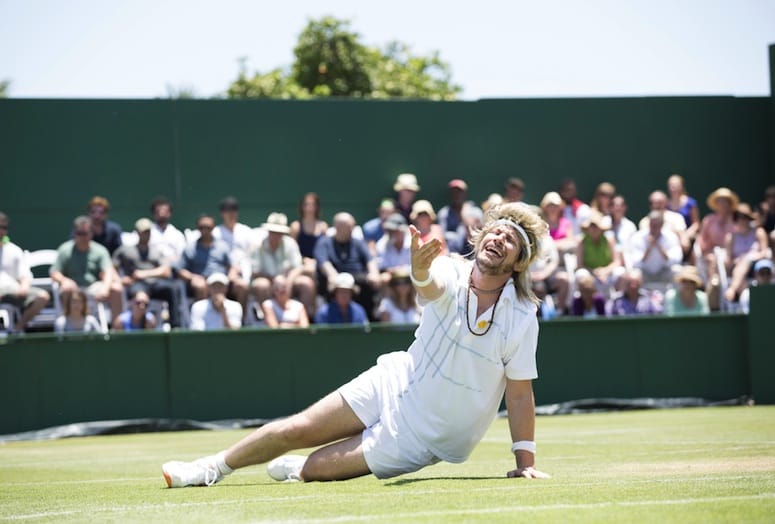 A tennis pro from Seattle once asked if he could borrow some tennis balls so he could spell out, "Will You Marry Me," on the edge of the grass tennis court at the JW Marriott Desert Springs Resort & Spa in Palm Desert.

That may have been one of the more unique applications of the sunken grass tennis court just adjacent to the Tennis Club until HBO came calling.

"I think they started looking for grass courts," says Jim Leupold, director of tennis at the resort of HBO's interest. "The LA area has some, but they are all private, so we have it here, Mission Hills Country Club has grass courts, and PGA West." Kit Harington reacts to a point during filming of 7 Days in Hell.

Leupold, who has worked at the resort 28 years, had a front row seat to the filming while the resort's Tennis Club served as a place a refuge from the heat for the film's stars, crew, and extras. For his part, Leupold and head tennis pro Dave Kensler watered the grass court every day since the sprinklers could not be used. A 20-foot scaffold loomed over the grass court and stands were built to simulate Wimbeldon's Centre Court. "For a low camera angle, they did a pretty good job of making the place look Wimbledonish," Leupold says.

"She is the horrible tennis mom, brow beating Kip Harington to pieces," says Leupold, laughing. "She had some funny scenes. She went from just talking with people in the Tennis Club to boom. Action. She is just right in it. Her scenes took like two takes. She just went straight into character so well." The film was directed by Jake Szymanski and written by Murray Miller (HBO's Girls and FOX's American Dad), who Leupold says became a big fan of the grass court. "He loved that court. Every time there was a break, he was asking us to hit balls with him," Leupold says.