In the year since golf legend Arnold Palmer’s death, Sept. 25, 2016, there’s been a subtle change in the atmosphere and a healthy uptick in business at the La Quinta restaurant that bears the King’s name.

“There seemed to be a lot of people coming to pay respects,” says Dustin Nichols, general manager of Arnold Palmer’s Restaurant, an estate-like establishment in Old Town La Quinta known for its sprawling outdoor patio and Palmer mementos lining every wall. Palmer himself was a frequent guest during season, often lingering to speak with his fans. “There was definitely a lot of nostalgia. And the patrons seem even more interested than usual in all the memorabilia we have, telling the story of Mr. Palmer’s life and career.”

The restaurant will wait to mark the first anniversary of its namesake’s passing with a potential charity event later this year, Nichols says. In the meantime, we’ve rounded up eight suggestions for Arnie’s Army to pay homage by visiting some of his landmarks in the desert.

“I just like it here,” Palmer once said about the Greater Palm Springs area in a 2014 Desert Sun article marking the restaurant’s 10th anniversary. “It’s the most wonderful place in the world. I came here in 1955 and I never left.” While there was no substitute for his native Latrobe, Pennsylvania, the desert was for many years the King’s true second home.

The story of how the young Pennsylvanian professional touring golfer discovered the desert in 1955, hauling a trailer with his wife Winnie riding shotgun, is one of the highlights of Palm Springs Golf: A History of Coachella Valley Legends & Fairways, a must-read for Palmer fans by veteran Desert Sun columnist Larry Bohannon. The story details how Palmer made this place his own and shaped its golf development for decades. 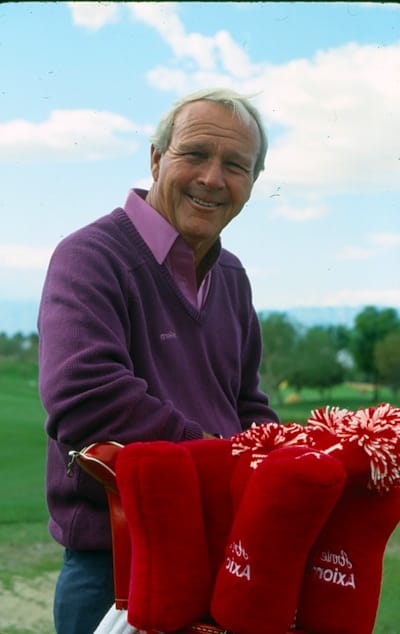 Arnold Palmer influenced the development of golf in the Coachella Valley not only by playing but designing golf courses as well.

2. Play one of his desert designs: Classic Club.

Palm Desert’s Classic Club ranks seventh on GolfAdvisor’s list of Top 25 Arnold Palmer course designs. Host track for the Bob Hope Chrysler Classic from 2006 to 2008, the Classic Club has recently added to its myriad accolades the designation of “Certified Audubon Cooperative Sanctuary,” in recognition of the facility maintaining an extraordinarily high degree of environmental stewardship. Here’s a tip for Classic Club first-timers: Get to the course early, because you’ll want to take your time with the superb practice facilities — they are unsurpassed in the valley. 75200 Classic Club Blvd., Palm Deert. 760-601-3600; classicclubgolf.com 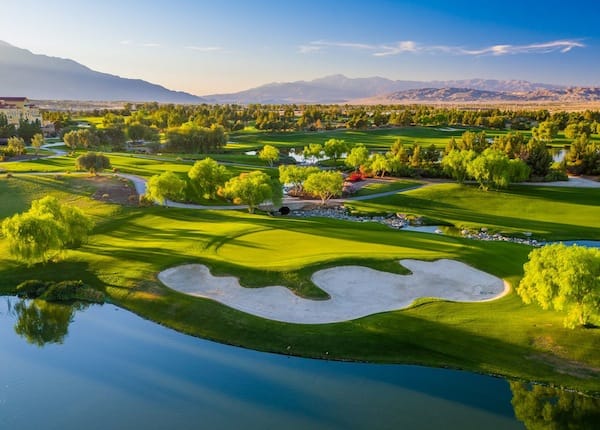 PHOTO COURTESY OF CLASSIC CLUB
The Classic Club in Palm Desert features an Arnold Palmer design and the former host to the Bob Hope Classic. 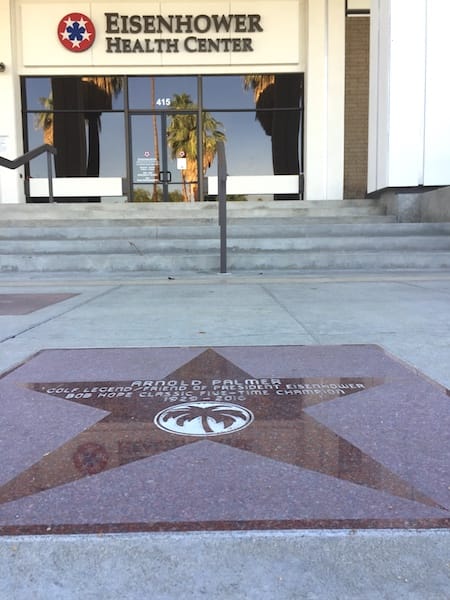 Is there a golfer who wouldn’t proudly sport the King’s tricolor umbrella logo out on the course? Arnold Palmer apparel is available, and you’ll find the range — shirts, shorts and pants, layers and rain gear, belts and hats — online and at retail outlets such as the PGA Superstore in Palm Desert. Sales benefit Arnie’s Army Charitable Foundation, which is carrying forward the Palmer family’s tireless philanthropic efforts.

5. Settle down with
the storyteller.

Palmer authored a shelf of books, the last of which was published the month after his death. A Life Well Played: My Stories shows the King at his story-telling best. Look to other Palmer titles such as Situation Golf and The Arnold Palmer Method for instruction and for a sense of what made the King the warm-hearted Everyman he was. As an added bonus, you’ll learn the truth about the Palm Springs roots of the drink that got its name when a woman told a waitress in a desert eatery, “I want what he ordered. I want an Arnold Palmer.” 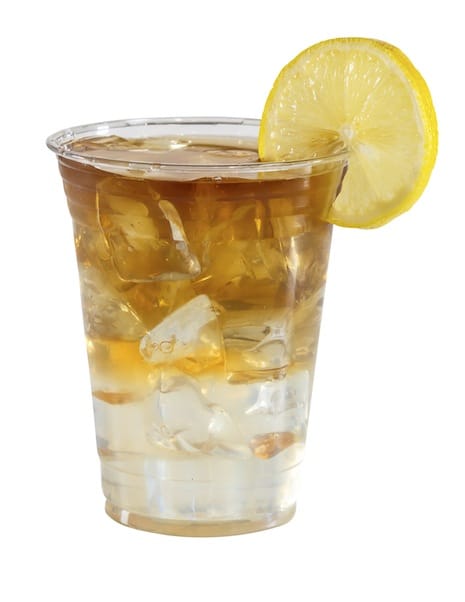 PHOTO BY THINKSTOCKPHOTOS.COM
Read Arnie's books and you'll discover the origins of the drink that bears his name. 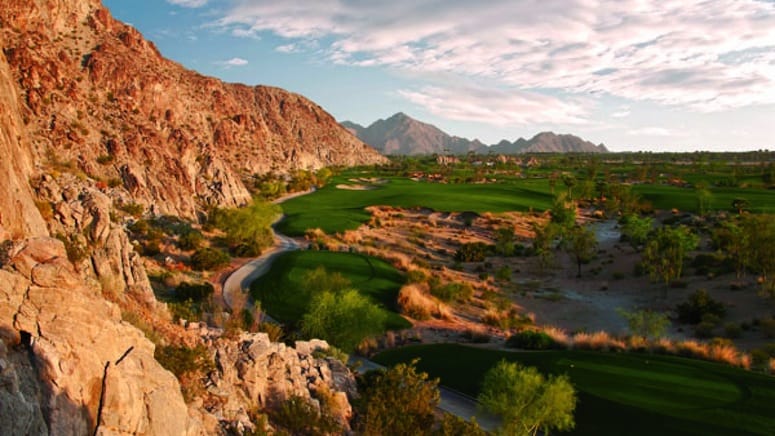 PHOTO COURTESY OF SILVERROCK RESORT
SilverRock Resort Golf Course is wound along the base of the Santa Rosa Mountains to create a vivid playing experience.

6. Play another of his desert designs: SilverRock Resort.

Tee it up on the Palmer-designed site of the 2009 through 2011 Bob Hope Classic. La Quinta’s SilverRock Resort is truly stunning, set against the backdrop of the Santa Rosa Mountains. You can play the front nine holes twice until Nov. 7, and then the full 18. 79179 Ahmanson Lane, La Quinta. 760-777-8884; silverrock.org

Think of it as the unofficial Arnold Palmer commemorative clubhouse: Compare scorecards, swap stories, and dine like a king — the King. While sipping his namesake drink or a bucket glass of Palmer’s preferred vodka, Kettle One, be sure to spend some time in front of the Arnold Palmer Memorial Wall. The full-size photograph of the King bears written thank yous and tributes from patrons through the last year.
78164 52nd Ave., La Quinta. 760-771-4653; arnoldpalmersrestaurant.com 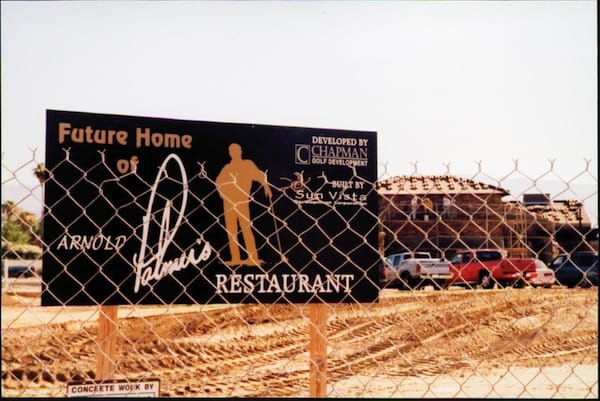 Sign indicates the coming of Arnold Palmer's Restaurant, which opened in 2004 in La Quinta.

Since 2014, La Quinta has celebrated Arnold Palmer Day Feb. 16. Expect a repeat in 2018. From a 1986 Los Angeles Times article by Shav Glick, Palmer reveals why the desert brought the best out of him: “I remember, when I first drove over here from Brawley to take a look at Palm Springs in 1955, that I said to myself, ‘What a great place for golf.’ The environment in the desert has always inspired me to want to play my best. I guess that accounts for all the success I’ve had here, right from the start.”