Lainie Kazan at Renaissance Esmeralda Resort and Spa Oct. 30 and 31 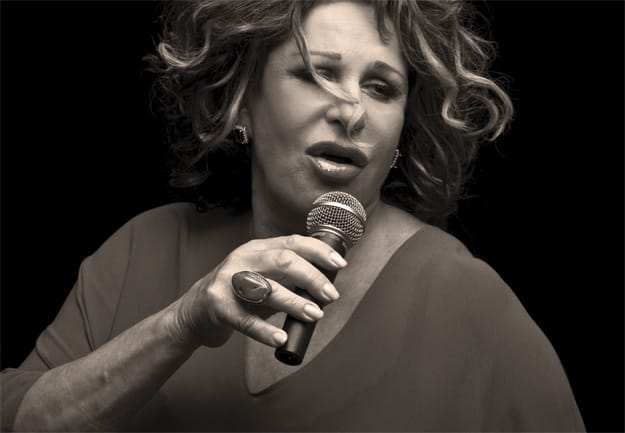 Lainie Kazan breathes deeply and sighs. She’s taking a moment to ponder what she loves most about performing and can’t quite articulate the deeper significance of it. Not yet. Not quite. It’s not that easy. After all, how does one sum up something that resonates with every fiber of her being? (Her words.)

“It’s the joy of singing,” Kazan eventually offers. “It’s emitting a sound in my body and feeling it — the experience of freedom. It’s like a primal scream, and it’s an incredible gift.”

What’s incredible is Kazan herself. It’s hard to walk away from the Broadway/film/TV star without being reminded about the things one used to adore about Hollywood: the class; the style; the flair; the sense that true “celebrity” was not only a privilege, but also an opportunity to practice a little grace.

Today, all those qualities have either gone into hiding or evaporated into a cloud of 3-D or Scream 4s. So when Kazan talks about her four decades in show business (how Dean Martin was a catalyst for her career or that Hugh Hefner gave her a shot as a businesswoman when she was really down and out), you get the sense that she took the very best things of a luscious era and learned the life lessons (some of them hard) that came along with it.

Organizers of the Desert Cities Woman’s Show bank on that. Kazan is guest of honor at the third annual showcase, which unfolds Oct. 30 and 31 at Renaissance Esmeralda Resort and Spa. While the performer won’t be singing, she will speak candidly about her life in the “Women of Influence” series and participate in a Q&A session.

Fittingly, Kazan benefited tremendously by “women of influence.” And it all began in the Adirondacks. It was there, at the summer paradise Camp Che-Na-Wah in New York, that, at age 9, she wanted to stretch her imagination further. Born in New York City, she was aware of how vibrant the arts could be; so at the camp, she naturally gravitated to studying theater and acting — and not with just anybody.

“My acting teacher was Anne Bancroft,” she muses. “She was called ‘Ann Italiano’ at the time, and she had a great influence on me. I was like a sponge where she was concerned. I wanted to know what she knew.”

In time, other class acts — Ella Fitzgerald, Billie Holiday, Lena Horne, Betty Hutton — fueled Kazan’s passion to harness the power of her voice and body. After honing her craft, she turned heads as Barbra Streisand’s understudy in Broadway’s Funny Girl and then became a hit in guest appearances (26) on The Dean Martin Show.

But, she points out, “I wasn’t grounded at all when I first started my career. I was very neurotic, very difficult. I was trouble.

“For me, it came very fast,” she explains. “One day, I was in the chorus; and the next day, I was doing The Dean Martin Show. I had training and studied my whole life and I was prepared [to perform], but I wasn’t prepared for the cutthroat business of how theater, movies, and TV can be. But it’s like any business, I guess, and I just was never made like that. I took the hard road. I went through a lot of down time.”

At 30, she was bankrupt. “But I kept on trucking,” she says. “I believed in my talent and my ability, because I was told I had that ability by people I really admired — people I knew were great in their particular field. So I never lost faith in that. I just learned.”

Kazan found creative sunshine in an unlikely place: running a lounge (after convincing Playboy magnate Hugh Hefner to overhaul one of his clubs in, of all places, Lake Geneva, Wis.). The Hef was so impressed with Kazan’s spunk that he helped launch Lainie’s Room in Los Angeles and, later, Lainie’s Room East in New York — two venues that enjoyed immense popularity in the ’70s.

“I did everything,” Kazan chuckles. “I did the menus, decorated the room, hired the talent. I sang there.”

Her vocal capabilities — along with her sense of humor and acting skills — opened more doors. She appeared in a number of television shows: Paper Chase, Touched by an Angel, The Nanny, and St. Elsewhere (for which she garnered an Emmy nod). She fared well on the big screen, too, pulling off believable turns in outlandish endeavors like Lust in the Dust and in more grounded outings such as My Favorite Year (she nabbed a Tony nomination for the Broadway version).

She hit pay dirt playing Bette Midler’s outspoken mother in Beaches (she and Midler were the same age), only to later help launch the cult following that was My Big Fat Greek Wedding, in which she played the outspoken matriarch.

Meanwhile, her latest CD, In the Groove, continues to do well.

If there is a secret to her success, Kazan believes it might have everything to do with “willing to get older” (she is 70).

“I’ve accepted my maturity. I’m not afraid of it,” she asserts with a laugh. “I’m not afraid of morphing into other things. I’ve grown into being really comfortable with myself. I just am me. I feel that’s part of what I’ve really been learning lately.”

At the end of the day, Kazan admits that her most precious love — aside from her daughter and 11-year-old granddaughter — is music.