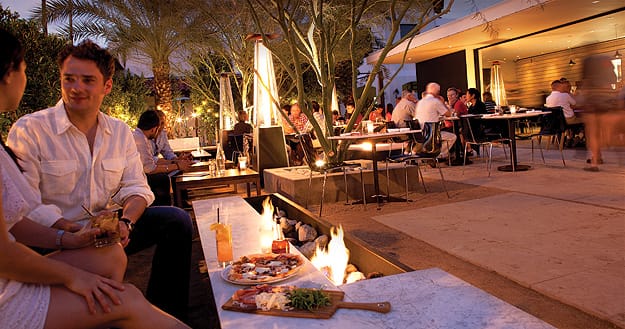 Clusters of hungry hipsters, scene makers, and snowbirds linger under the Spanish arches in front of Cheeky’s, waiting to be ushered to an umbrella-covered table with translucent orange chairs or into the small dining room with plain white walls and wood-beamed ceilings. They embrace the relatively tight space to munch their way through one of the most innovative and forward-thinking menus Palm Springs has ever seen. Even Vogue magazine declared, “Its menu means business.”

Tara Lazar, the restaurant’s 35-year-old chef/owner, was born and raised in Palm Springs. She remembers slim pickings when it came to good food in town. “We had Sambo’s and Louise’s Pantry, and they were institutions,” she recalls. “And then we were stuck with places that made food from the back of a Sysco truck.

“So I felt the city needed some good homemade food — something current — and so came Cheeky’s.”

In June 2008, Lazar opened her 30-seat restaurant in the former Peppertree bookstore, serving healthy, creative breakfasts and lunches from a menu that rotates so frequently customers download it from Cheeky’s website.  “Our patrons eat here regularly, and they like variety,” she says. “Inasmuch as it’s fun for them, it’s also great for the staff, because it keeps them on their toes.”

The proximity of the large, open kitchen to the small dining room gives the space the air of a clanky yet sophisticated cantina.

Lazar was overwhelmed by the response to Cheeky’s unusual offerings, such as duck confit hash and truffle tater tots. In January 2011, her husband, Marco Rossetti, joined her in opening a sister restaurant, Birba, next door.

“Birba was supposed to be a hut in the middle of the lawn so people could sip on bloody Marys while they waited to be seated at Cheeky’s,” Lazar says. “Then, because of city rules, we decided to enclose it a bit more, and then we were selling just two or three pizzas. Now we have braised meats, salads, and 20 employees. So much for simple.”

Cheeky’s patrons who expected funky sensibilities were instead treated to Birba’s sleek and modern Scandinavian simplicity. They cozy up on long couches fronting fire pits on a garden patio or slug back specialty cocktails with names like Heated Snake and Hello Nancy along a long Carrera marble bar. Like Cheeky’s, Birba’s menu changes frequently, but its building blocks are bona fide Italian fare (air-cured beef, roasted beets, fresh ricotta, gourmet pizzas, and homemade sausages and meatballs).

When Lazar says her food is fresh, she means it. “Only when I got into it did I realize there are these amazing farms that were shipping their produce across the country instead of selling it here, because there was no demand,” she says. “So we shifted to a 100-mile-radius rule, and we now use only local produce.”

She typically oversees the kitchen while Rossetti greets customers. “I want people to love good pizza as much as I do,” he says. “Since I began working in pizzerias as a dishwasher in Milan, I have always wanted my own pizzeria. Pizza brings families and friends together — and a bit of vino never hurt either.”

Lazar and Rossetti met in San Francisco when she was in college and he was working at the Four Seasons hotel. After Lazar quit her job as a stock trader, they moved to the desert to be closer to her parents. They live close to their new businesses, and customers often see Lazar walking to Cheeky’s.

Most restaurateurs, after two hits in a row, would sit back and bask in their success. But in October 2011, the couple — with the help of investors from New York — bought the adjoining, 34-room, 1950s-era Peppertree Hotel on the corner of Granvia Valmonte and Indian Canyon Drive.

The addition of the hotel completes the ABC (Alcazar, Birba, Cheeky’s) brand, although Lazar hints that a third restaurant is on its way. It will be an Asian concept located in the former Canyon Flours Bakery at West Chino Drive and North Palm Canyon Drive.

“I think the [Uptown Design District] is really dynamic because of the talent,” Lazar says. “Every business here is run by its owners. We are all creative, hard working, intelligent, and most of all passionate about what we do. Jake’s, Trio, Koffi, and the ABC family — we all kind of came here around the same time. So we should all take credit for its success. We complement each other very well, as we all share the same clientele and we all have a great product. We are a good counterculture to the more touristy downtown. You know when you go to a new city, the downtown is obvious and you are always hoping to find the pocket of authenticity. I think together we create that pocket.”