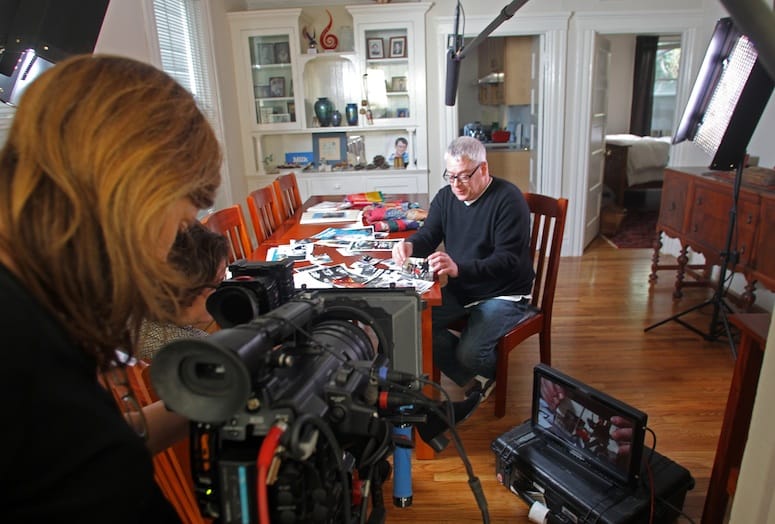 Nadine Licostie often finds herself looking forward after the completion of a film.

Until the executive producer and director at the Manhattan-based Red Thread Productions made The Last One, which will screen during the American Documentary Film Festival, March 27-31, in Palm Springs.

“Usually after a film, I want to say ‘when is the next film,” she says. “But I am, every day, thoroughly engaged with this one even though it’s complete. Every time I speak with someone about it, I get more engaged with it.”

The Last One looks at the HIV/AIDS crisis from a historical perspective to the present.

“There have been several films done about the (AIDS) quilt,” says Licostie (pictured below). “But we realized one hadn’t been done for several years; and nothing had been done from today looking back historically.”

Looking back, it may seem obvious that a documentary film would result after The Names Project approached Licostie to help produce the display of the organization’s famous “AIDS Quilt” on the occasion of its 25th anniversary in 2012 on the National Mall in Washington D.C. As luck would have it, the Smithsonian Folk Life Festival and the World AIDS Conference were also taking place at the same time – the latter for the first time in Washington D.C. in 15 years.

“For us as documentarians, rarely do you get the chance where you can find a display of a historically significant object and its founding members,” says Licostie. “Add to that a global conference about what’s happening today in the same field of interest as the thing your filming all in one place, and it was a rare opportunity to film history being made.”

“It was extraordinary opportunity,” adds Licostie. “And it was obvious we had to shoot.”

Licostie hopes The Last One can continue to educate people — especially young people — not just about HIV/AIDS, but also about how the telling of individual stories through the media “can change hearts and minds.”

“It is so important to let people know how each individual makes a difference in the fight against bigotry,” she says. “That’s how people like Cleve Jones and Gert McMullen, who was the quilt’s original seamstress, did it: one panel, one story at a time.”

Although he is no longer affiliated with The Names Project and has not been for many years, the quilt was Jones’ brainchild in the mid 1980’s. Jones somehow intuitively knew that nothing could break through the walls of fear, hate and bigotry the way a quilt could, using the panels to tell the stories of people who had been lost to the disease.

“I can see that,” Jones says (pictured at right). “Of course, we could have done a lot with Facebook if it was around back then.”

Nowadays, Africa’s battle against HIV/AIDS could benefit from a quilt such as that of The Names Project, according to Jones. Today he works in San Francisco’s labor movement, focusing on workers’ rights in the hospitality industry, and as an advocate for affordable housing in the city.

“I think the fact that this film is the first in many years to be made about the quilt is testament to the progress that has been made at least in this and other developing countries,” he says. “But it is still important to get the message out. I think last year about 10,000 gay men died as a result of HIV/AIDS last year.”

He laments the fact that as he sees it, in general younger people are oblivious about how HIV/AIDS and the struggle against homophobia and bigotry almost devastated an entire generation.

Jones will be in Palm Springs for AmDocs and the March 29 premier of The Last One, a title that is an allusion to McMullen’s commitment to continue fighting until the last person is cured of HIV/AIDS.

“I’m looking forward to coming back to Palm Springs,” says Jones, who used to live here. “I love living in San Francisco, but I miss my friends in the desert.”