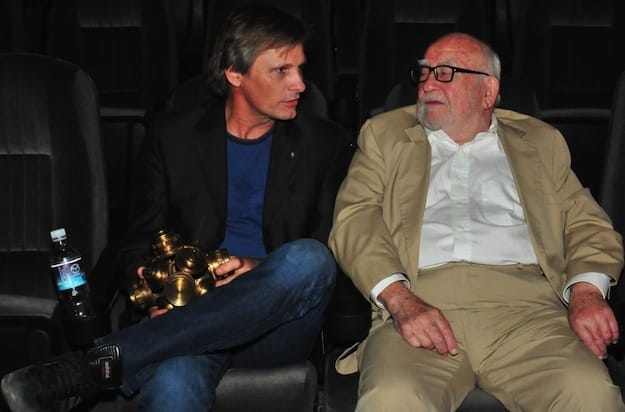 Gary King's film, "How to Write a Joe Schermann Song" captured Best Film honors at the AMFM Fest (Art, Music, Film and More) during its awards ceremony June 16 at the Buddy Rogers Theatre in Cathedral City.

Mortensen is the fourth artist to receive the Hopper award, named for and originally presented to the late actor and artist. Film 4 Change previously bestowed the award to actor Dean Stockwell and director Alex Cox at the Albuquerque Film Festival. AMFM embraces the sprit of Hopper and the Festival’s motto: hip, cool, funny, strange, social change.

“We are a community of artists committed to having pride in what we do and dedicated to making our country great through artistic and creative innovation,” Henrich said.

Mortensen expressed his gratitude for the award, especially due to its connection to Hopper.

“Dennis Hopper is not generally considered to have been a recluse or a hermit," Mortensen said. "Even during his periods of self-imposed isolation and heavy substance abuse some four decades ago in Taos, New Mexico, he often managed to share his moments of creativity, and of wild excess, with friends and strangers alike. I think it is safe to say that he was socially active by nature, always curious about people, about the way they think and create. He was never too far from the life of the party. However, he always emphasised  — even at the end of his life — that to be an engaged and conscious artist is to be essentially alone. To express honestly what they see, hear, and feel artists have to seek out their particular individuality, regardless of what others may think of them or their work."

Added Mortensen on the AMFM Fest, "I’ve been to some awards programs that are a load of self-important crap compared to this. Thank you. I look forward to future festivals — this is a great idea and it will grow and grow, I am sure it will. Thanks to Jared Davis, Hugh Millstein, and Digital Fusion Los Angeles.”

A couple of months before Hopper died, he was recognized with a star on Hollywood Boulevard. On that occasion, Mortensen tried to honour the fearlessness honesty that he inspired in others by reading a short poem by William Stafford, a very wise writer from Dennis' native Kansas. He read it again at AMFM Fest:

For My Young Friends Who Are Afraid

There is a country to cross you will
find in the corner of your eye, in
the quick slip of your foot–air far
down, a snap that might have caught.
And maybe for you, for me, a high, passing
voice that finds its way by being
afraid. That country is there, for us,
carried as it is crossed. What you fear
will not go away: it will take you into
yourself and bless you and keep you.
That's the world, and we all live there.

In addition, several other films were recognized from among the 108 total entries in the festival, including:

• Best Documentary Award went to "American Road", directed by Kurt Jacobsen and Warren Leming. The film, which “delves into the artistic, musical and literary resonances of the mystique of the road – and especially of veering off the beaten track – in American lore,” made its world premiere at the Festival.  Accepting the award was actor Ed Asner, who narrated parts of the film.

“I am truly honored they chose it — particularly because it’s in a festival Viggo won an award in — and I am a great admirer of his," Asner said. "As for 'American Road',  take a lesson from it. It is a beautiful piece of work.”

• Best Short went to Jason Guy McLagan for "Elegy for Eden", which also screened at Slamdance.

• Best Music Video was, "Loneley", by Alethea Root for the artist Azhia. She said, “I really won an award? Thanks y’all, it was locally produced and shot here in the desert.”

• Best Director went to Tony Glazer, director of "Junction", which also world premiered at the Festival. He said, “Thanks for the honor of this award and for having the film in this festival; this is everything indie filmmakers want to be a part of. They say it takes a village. Well, it takes a small nation army to make a film, and I am indebted to them — the actors, the crew, and even the financiers. This film would not be what it is without their involvement.”

• Matthew Millan’s, "We Win or We Die" won for best short documentary. Millan remarked, “Thanks for having us. Thanks to the Libyan people and to my own stupidity for going there. People are still suffering there in Benghazi and that’s what this is all about.”

• Special Jury Award was presented to Joseph Laraja’s comedy about a Northeastern seafood cook-off, "The Golden Scallop". Laraja said, “This is a complete thrill all the way around — everyone has been lovely and it’s a tremendous honor.”

• The Wally Award is given by a panel of judges to San Diego State University students. Students come in and pitch a film idea. Winners receive an award and cash. The award is conferred by UltraStar Cinemas vice president Wally Schlotter. For Spring 2013, the award went to "Plain White Tee" and director/ producer Devin Dolan, who said, “What a great learning experience. A good experience our first festival. Thanks to our actors and crew and friends and family.”

• The Festival presented a Best No-Show of His Own Poetry Reading to actor Michael Madsen — who was, of course, unavailable to receive it.  His scheduled absence from a reading at the Ace Hotel June 15 didn’t deter the audience, who rose up and turned the evening into an impromptu poetry slam — reading their own work as well as Madsen’s and other poets’.

Amazingly, about half the audience had their own material handy, including "Junction's" Neil Bledsoe, and director Alex Kleinert, who read a poem about wild horses based on his Festival film, "Wild Horses and Renegades".

• Johnny Dowers, star of the FX show, "The Bridge, presented the Cinephile Award to David Gardener. The award went to the individual who attended to the most events, who volunteered and assisted and who generally “helped make it happen.” Gardener said, “I have no idea what I am doing up here but I am happy about it.”

• The Film 4 Change Humanitarian Award went to Ellin Jimmerson for her immigrations documentary, "The Second Cooler". She said, “I am so excited I want to cry. Thanks to the festival for including me, thanks to Tyler Snyder (her web designer) for encouraging me. Corporate greed…I can’t go into all of that now. I hope this film can give a lot of people so much hope. People who are waiting to make that crossing, people who have been deported, a lot of hope for those that have had to follow their deported loved ones into exile and want to be reunited. “

• Film 4 Change recognized Craig Semetko with the Film 4 Change Photographer of the Year Award. Henrich said, “His work captures moments in the American spirit. Wherever he goes in the world, his lens follows it and captures it.”

Semetko thanked the organizers. “They worked tirelessly, sleeplessly," he said. "Now it’s officially a tradition. I think about how I got started taking photographs. It was a desire to tell people’s stories. As an actor, I have been a people watcher my entire life. Maybe with a camera I can tell stories in a different medium.”