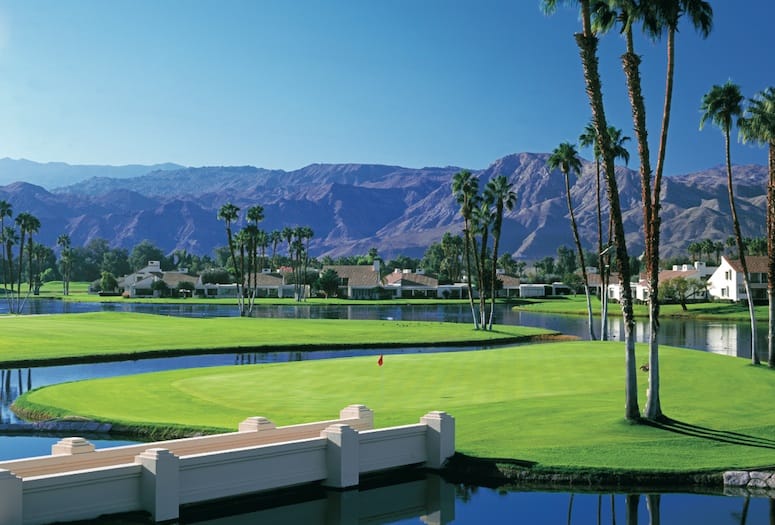 Back in November, it was announced that All Nippon Airways signed a five-year agreement to sponsor golf's first major, annually held at the Dinah Shore Tournament Course at Mission Hills Country Club.

At the close of the month, the ANA Inspiration flies into Rancho Mirage, with Japan's largest airline (by passenger number) taking the baton from longtime tourney sponsor Kraft Nabisco.

The event began back in 1972 on the Desmond Muirhead-designed course and has been an LPGA major since 1983. The No. 8 hole may be the toughest of the par 3 lot, with a testy uphill shot over bunkering to a mean, three-tiered green.

The tournament runs March 30 to April 5 and will see a purse increase from $2 million to $2.5 million as Lexi Thompson seeks to defend her title.

Despite the changes, the course remains fixture thanks to the attention paid to its design in the past.

"It's really interesting. We've had a couple of architects out here from the Palmer Group, and Mr. Dye was out here last year, and even talking with them – it's just a really good design," says Garret Kriske, general manager at Mission Hills Country Club. "It's a design that stays timeless. There are so many subtleties; it doesn't hit you in the face, but there are things you need to know to stay out of trouble.

"It's a course that shot selection and accuracy are really, really important," he adds. " It doesn't look like it at times, but it's really about where you play the ball. I consider it closer to a billiards match: if you don't put the ball in the right spot, your next shot is no good."

Really, much of the Dinah seems like it's all just in front of you. But it's one of those courses where a bad shot can cost you three more. Especially on the shorties. Hole No. 5 at Dinah Shore Tournament Course: “Our par 3s are very difficult here," says Mission Hills GM Garret Kriske. "There isn't an easy one in the lot.”

"You look at scoring and statistics for the tournament, our par 3s are very difficult here," Kriske added. "There isn't an easy one in the lot. You get a birdie, tip your cap and be excited; you get a par, tip your cap and move on happily. Sometimes, people look at par 3s as a breather or a break, but it's not that way here."

My personal favorite is the 393-yard par-4 sixth, with its inlet feature jutting from water all along the left and the drink guarding the green.

"Local knowledge is gonna' help a lot," says Kriske of No. 6. "You can take the short route with a couple of long irons, or you can try and bomb a driver to the right side. It's just different approaches, and I've seen it successful in many ways. But it's a hole with two completely different ways to play it, and neither are right or wrong. It just comes down to which one you can execute better." An excellent vantage of my favorite hole on the course. – No. 6. Where do you put this approach?.

Whichever option you chose, the approach shot is so exacting: avoiding the false front is key while concurrently knowing that playing long to the back hill will result in a testy (to put it mildly) third shot.

"Around tournament time, you hit the front of the green, you spin it back and you're in the lake," Kriske says. "And the green, it's a test all its own. Staying below the hole, it's a premium there. You get above the hole, and you're left with some really tricky putts."

Spicer Note: For an excellent study at the Dinah layout, take a look at this flyover feature from Mission's website.