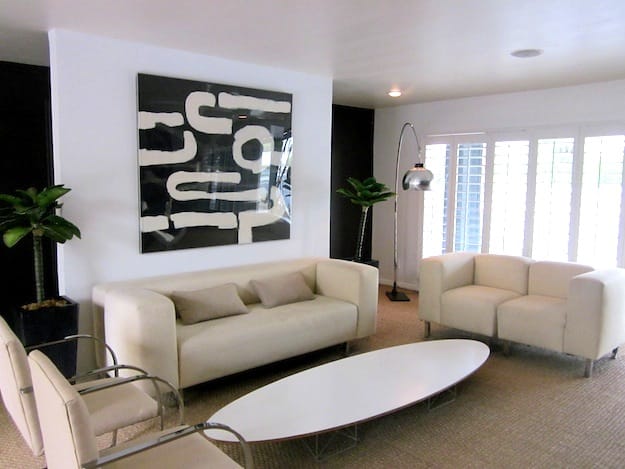 “I didn’t expect his death to hit me that hard,” said Kim E. Smith, niece and caretaker of Palm Springs artist/interior designer, Donald Lloyd Smith, who passed away July 20 last year. “I just didn’t have the mental capacity to host a memorial.”

Yet, exactly one year later, Kim lucked into the anniversary date at the Highest Form Gallery to showcase his last works.

“I wanted those who love his works to have them rather than just sit in storage,” Kim Smith said.

This is also a chance for some of his friends to say goodbye.

The show, which opens July 20, will feature mostly large abstract paintings, in the $2,000 to $3,000 range, including one in the same vein as one hanging at Saks Fifth Avenue in Palm Desert, said Robert D’Amour, owner of the gallery.

There will also be smaller giclee prints of trailer parks, a location that he is most recognized for painting.

“My uncle lived with his parents and one brother and sister in a trailer park growing up in Downey (Calif.),” Kim Smith said. “Most of those paintings were based on his childhood memories.”

There are none left, but some can still be found in a book that Kim Smith created in 2009, “Donald Lloyd Smith: A Palm Springs Artist.”

“My uncle would make up stories about his paintings,” she recalled. “There’s one in the book that shows a man holding a cat on his lap. He’s very attached to his mom, and if anyone would be a serial killer, it would be this guy. He and my grandma Inez were obsessed with serial killers.”

At the July 20 show, there will be one self-portrait of Donald Lloyd Smith, which Kim acquired by accident.

“It all came about because of a margarita,” she said.

Donald Lloyd Smith forged great relationships with his collectors, some of whom would make a habit of “trading in” one painting for another.

“The wife of the collector didn’t like that my uncle was holding a drink in hand,” Kim Smith said. “When she traded it in, we ended up with his only self portrait.”

Besides the portrait, the family will project photos and his biography on the wall.

“He lived here when there was nothing between here and Indian Wells,” Kim Smith said. “He knew every street and all the people in between.”

His career began in 1972 as a renderer for a Palm Springs interior designer, Vee Nisley. He later became an interior designer, developing model homes for upscale developments, such as El Dorado, Sandpiper and Marrakesh Country Club, and Liberace was also one of his clients.

To compliment his interiors, Donald Lloyd Smith painted large-scale acrylics, and was soon collected by the famous, including Joan Kroc, Mary and Sonny Bono, and Red Skelton, among others.

He was best known for the renovation of the Movie Colony Hotel built in 1935 by Albert Frey. His design enhanced the modernist appeal, while preserving the integrity of Frey’s design. It’s decorated with modern furniture, including a marshmallow couch, and several of his large-scale paintings.

The hotel is a few blocks from the Highest Form Gallery on North Indian Canyon Drive. During “Modernism Week” in Palm Springs, the hotel was inundated with visitors wanting to see Smith’s work.

“My uncle lost so many friends in the 1970s and ‘80s to AIDS,” Kim Smith said. “So it’s only fitting that part of the show’s proceeds will benefit the Desert AIDS Project.”