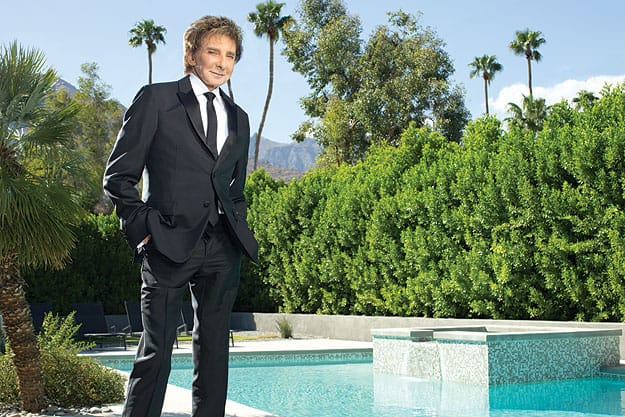 Editor’s note: After this story went to press, Barry Manilow gained his 50th hit on the Billboard adult contemporary chart. With “Santa Claus is Coming to Town,” from Barry Manilow: The Classic Christmas Album, he passes Johnny Mathis (49 entries) and becomes the fifth artist to reach 50 hits. Elton John leads with 68, followed by Barbra Streisand (64), Neil Diamond (58), and Elvis Presley (53).

It’s a humid Monday morning at the end of an unusually sticky-hot desert summer, and Barry Manilow — who was performing a day earlier in London — walks into a cool, new, modern-design house in Palm Springs’ Las Palmas neighborhood.

“Does anybody live here?” he asks, surveying the crisp, minimal interior. On this day, the house designed by Vance Burke is the backdrop for the photo shoot celebrating Manilow’s five performances this month at McCallum Theatre in Palm Desert. The shows, which he calls “A Gift of Love,” benefit 27 charities in the Greater Palm Springs area.

Manilow continues onto the back patio, admires the azure pool and towering palm trees, and raises his arms with excitement. “This is Palm Springs!” he says in his classic, show-stopping fashion. “Should I be in the pool?”

The crew might have been thinking about the pool, but no one would suggest it. After all, Manilow, 69, had hip surgery only nine months earlier.

Manilow tells his assistant to get in the water — only a few steps in — while he and the photographer frame up the view and shoot a few test images.

“That’s superstar!” he says. “That is the cover of Palm Springs Life.”

The pop icon goes back inside to pick out his signature black shirt, black pants, and white jacket and perfect his hair and makeup.

In front of the camera, Manilow exudes pure energy. For him, it’s natural, seemingly effortless — and always passionate.

Manilow, who has sold more than 80 million records, began a seven-year run of shows in Las Vegas (five years at the former Las Vegas Hilton and two at Paris Las Vegas) after 30 years of touring, winning over audiences with any of his 47 top-40 hits. You know them: his 1975 debut “Mandy” and other timeless favorites such as “Copacabana,” “Could It Be Magic,” and “Looks Like We Made It.”

“I had to get off the road,” he says, referring to “all those years of living out of a suitcase, waiting for planes, and eating bad room service [food].”

With the Vegas gigs, Manilow could keep his band together and sleep in his own bed in Palm Springs — at least for a few months. “In the beginning, I flew home every night,” he says. “It was a 20-minute flight. That was great — until I saw the bill.”

Then he took occupancy of the Hilton’s Elvis Presley suite.

“I don’t remember one bad show there,” Manilow says of more than 700 performances in the showroom that Presley made famous. “We celebrated at the end of every show. It was a very creative time. The costumes and everything would change. Every six months, we would change out songs.

“Then at Paris, we started from scratch,” he continues. “We came up with great, gorgeous settings. The problem was I couldn’t change anything. Everything was dependent on everything else: the video, lights. It was the same show every night. I wasn’t as free as I was at the Hilton.”

Ironically, Manilow found freedom in his occasional performances on the road — from Atlantic City to London.

He also continued to put out records. Before his show opened at Paris, the Las Vegas hotel, he was inspired by the romance of Paris, the French city, and released The Greatest Love Songs of All Time, surveying music from the 1950s, ’60s, ’70s, and ’80s.

At the end of his run at Paris, Manilow had corrective surgery on his hip muscles in Los Angeles and eventually returned to performing three shows every other weekend in different cities. Manilow returned to Palm Springs in late September to rest for a couple of months before his next run of shows, which begin this month with five performances at McCallum Theatre. And he seems remarkably at ease.

Manilow, his manager, and collaborators have re-created “A Gift of Love” (a show he did in 2009) to benefit 27 charities in Greater Palm Springs. “It was a great idea. It’s a real interesting way of giving back to the area that’s been my home,” he says. “It felt good to me. I wish I could do this in every city where I perform; but I live here, so I can do more [here].”

The holiday-themed show is loaded with great songwriting — including songs from Barry Manilow: The Classic Christmas Album, released in October. “I’ll squeeze in hits as I can,” he says.

The show also marks the return of his big band. “I had a 14-piece band in Vegas, and it was great,” Manilow says. “Then I performed at the Hollywood Bowl with the [Los Angeles] Philharmonic, and it changed my life. Every city we played, we worked with their orchestra.”

He scaled down from 75 to only six musicians for a series of “one-nighters” in different cities. “It was as intimate as I’ve ever done,” he says. “I talked to the audience more than I ever have. They were very happy with me talking to them. And I enjoyed it. The audience was wilder than ever. It was a big lesson. I never believed [a small production] would work. But it sounded just as big as I can get it. And I could change songs whenever I wanted. You can’t do that with [an orchestra].”

Manilow will have about 30 musicians with him for the McCallum performances, as he did on his Christmas albums.

“This is my way of saying thank you.”

With every concert Barry Manilow performs, he adds to his war chest for Manilow Music Project, which he launched in 2008 when he donated $500,000 worth of musical instruments to 21 schools in the Greater Palm Springs area. He has since done the same in Los Angeles and Las Vegas, concerned over dwindling budgets for music programs in schools. “You see something going wrong and think, ‘How can I help?’ I would have wound up in music somehow, but it was orchestra class that made me realize what I wanted to be. I was really good, and I made friends. It can’t happen for these kids unless they have instruments to play.” Visit www.manilowmusicproject.org. 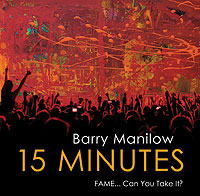 Barry Manilow knows some of his audience will flee to the concessions when he utters the words, “Now I’m going play a song from my new album.”

This does not deter him.

“Audiences want to hear hits, so I’m very delicate about that moment,” the singer/songwriter says. “Fortunately, the new songs are going over great.”

In 2011, Manilow released 15 Minutes, a concept album about early fame. The title comes from Andy Warhol’s declaration that everybody will be famous for 15 minutes.

“No one knows how to sell a record anymore, especially one that tells a story with a beginning and an ending,” Manilow says, referring to the way fans now download individual songs instead of complete albums. With 15 Minutes, he says, “You need to listen to all the tracks. These songs need to be heard.”

The album’s story follows a young musician who gains fame, enjoys it to excess, and loses everything. It’s a commentary on Manilow’s own experiences in the world of reality television, where he appeared as a mentor on American Idol and saw kids becoming household names overnight.

“How do you treat people [when you’re suddenly famous]? And what kind of person are you? How do you handle that?” he wonders, adding that when “Mandy” came out, he was 29 and “blown away” by its reception. “That’s what this album is about. These kids didn’t pay their dues playing in bars. And suddenly they’re famous, wearing Armani. You wait for them to show up on TMZ because they did something — because they’re kids!”

For 15 Minutes, the adult contemporary legend had to write songs for the guitar. “It’s the closest to a rock and roll album I’ve ever made,” he says.