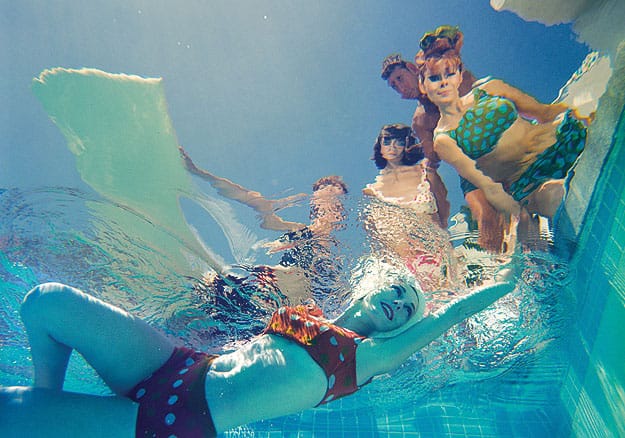 The sexiest, most seductive art exhibition in Southern California delivers plenty of eye candy: beautiful bodies — many of them celebrities — luxuriating around swimming pools. But Backyard Oasis: The Swimming Pool in Southern California Photography 1945-1982 at Palm Springs Art Museum is about much more than carefree fun in the sun.

The glamorous images of Marilyn Monroe, Ann Miller, Rock Hudson, and others give star power to a show that examines the idealized lifestyle that inspired America’s postwar identity.

“The photographs project a happier, supposedly better way of life,” says Daniell Cornell, the museum’s deputy director of art and senior curator who organized the exhibition. “Following World War II was the rise of the nuclear family and the sprawl of suburbia, where backyard pools offered refuge from city life and the threat of communism.”

Backyard Oasis goes even deeper, demonstrating how photography has emerged as an important medium of fine art, rather than the domain of celebrity and fashion magazines, looky-loos, and hobbyists. For as many Hollywood luminaries as the show includes, there are images by brand-name photographers, such as Herb Ritts and Diane Arbus, and “serious” fine artists, including David Hockney, Ed Ruscha, John Baldessari, and John Divola.

The 140 images in the exhibition “bring together different aesthetic modes — documentary, snapshot, fine art, portrait — in a single space,” Cornell says, adding that a pivotal moment for fine art photography came in 1982 when the Venice gallery L.A. Louvre exhibited Hockney’s Polaroid composites. “This was the first time photography challenged painting as the dominant mode in all fine art,” Cornell says. The artist’s composition of many Polaroids as a single artwork “addressed scale and the wall.”

Backyard Oasis — one of the most accessible of more than 60 exhibitions funded by the Getty Foundation as part of the regionwide Pacific Standard Time: Art in L.A. 1945-1980 — organizes the photographs in themes explored in the museum’s preparatory symposium: the backyard pool in celebrity, Cold War California, architecture and design, and beefcake and “skatecake” views of masculinity, as well as art historian and writer Robert Atkins’ notion of the Pacific Ocean as the pool for all of Southern California and UC Santa Barbara professor and critic Dick Hebdige’s dystopian perspective.

Collectively, their work investigates how the image of water, idealized in the backyard swimming pool, created a regional identity that Hollywood and mass media sold as a modernist utopia. The phenomenon began in the 1940s and ’50s rush into suburban family life, where wholesome values, leisure, and privacy prevailed. The feeling of openness and freedom from the urban environments had political undertones: Overwhelmingly white, middle-class families populated new houses with modest pools, and they represented an emerging consumer market.

Using many Bill Anderson photographs drawn from the museum’s permanent collection, Cornell positions the pool as an essential ingredient of Palm Springs living, with the golf courses and mountains as extensions of the leisure ideal. The Anderson images — many shot (looking like candid snapshots) at the legendary Racquet Club — were “spectacles for physique and health, staged to entice people to come to Palm Springs, selling the glamorous experience of the stars,“ he says.

The swimming pool also provided a platform to show the changing depictions of gay and straight masculinity. Bob Mizer’s nine homoerotic beefcake images once held a pretense that the buff, one-cloth-from-naked men were posed to promote fitness. “His approach was to create a better body consciousness,” says Tyler Stallings, a Backyard Oasis research team member and director of UC Riverside’s Sweeney Art Gallery at the Culver Center of the Arts. In the symposium, Stallings juxtaposed images from 1940s-1960s Physique Pictorial magazines with Craig Stecyk’s images of 1970s bare-chested, short-shorts skateboarders known as Santa Monica’s Dogtown Z-Boys, who commandeered abandoned backyard pools. “[Stecyk’s] depictions of communal masculinity were a challenge to the family unit,” Stallings said.

Another member of the research team, Jennifer Watts, curator of photographs at the Henry E. Huntington Library in San Marino, used shelter magazines — particularly House Beautiful and House & Garden — to demonstrate how media celebrated this modern, indoor-outdoor lifestyle. The backyard swimming pool was an aesthetic environment, a backdrop for all other activity. “Swimming was almost beside the point,” she says.

In addition to 140 photographs, the exhibition includes ephemera to contextualize the images. For example, supporting Watts’ premise is the September 1956 issue of Look magazine, calling attention to “The West” theme and the standard-issue blonde bombshell reclined by the pool in front of a classic Cliff May ranch house. Magazines “planted the seed of desire to which people responded,” Watts says.

Herein lies evidence of emerging American exceptionalism — the idea that the leisurely way of life was no longer strictly for the elite. Images by architecture photographers, including Julius Shulman, elevate midcentury modern houses to celebrity status. Shulman’s iconic views of the Richard Neutra-designed Edgar J. Kaufmann House and the Albert Frey-designed Raymond Loewy House provide excellent examples, as do Anderson’s many photographs, especially Mr. and Mrs. Alan Ladd at Home, which finds the Ladds looking like an average couple, seated and reading by the pool in their back yard with a stunning view of the San Jacinto Mountains.

Hebdige casts a darker cloud, suggesting, “The swimming pool hasn’t been a happy place.” A research team member who teaches art, film, and media studies at UC Santa Barbara (where he also oversees the Desert Studies program), Hebdige describes the nefarious swimming pool as “a trap, murk, sink, hole in waiting, a deathtrap even.” For all the shiny, happy activity around the pool, he says, there’s sleaze, promiscuity, murder, and suicide. “The backyard oasis is beleaguered, needed like a hole in the head.”

His perspective brings to mind one of the photographs Cornell categorizes as a  “conceptual intervention”: the untitled 1974 self-portrait by Light and Space artist Peter Alexander, who appears to be floating in a dark mechanic service well filled with water with an ominous light shining on his face.

Backyard Oasis also features a video slideshow focusing on Stecyk’s skateboarder images and a project consisting of celebrity home movies, which include clips from Steve McQueen and Ginger Rogers.

“As our exhibition abundantly demonstrates, the indelibility of the swimming pool as concept and reality in the collective imagination and culture of Southern California helped give rise in photography to one of the area’s strongest, most richly layered postwar art forms,” says Steven Nash, the museum’s executive director.

Moreover, Cornell says, the images in Backyard Oasis “suggest how the exchange between private and public life was mediated during the period when suburbia had its most profound impact on Southern California.”

PACIFIC STANDARD TIME – By the Numbers