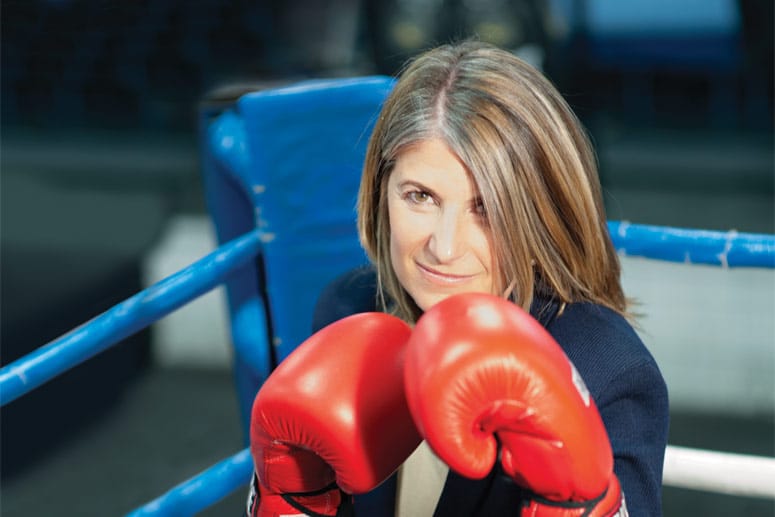 Whether in the boxing ring or the legal arena, Palm Desert civil appeals attorney Mary Lehman has long prided herself on focused aggression. At the turn of the millennium, she earned a 5-0 mark as a professional boxer, and a global rank among women bantamweights. “The ring is a microcosm for life,” Lehman says. “If you can learn to win in the ring, you can learn to win at everything in life.” Last March, the Idyllwild resident and married mother of twin girls was appointed by Gov. Jerry Brown to the maligned California State Athletic Commission, which regulates professional and amateur boxing, kickboxing, and mixed martial arts throughout the state.

I also went part-time at work so I could focus on my boxing. And I ended up losing my job, because they laid off all their part-time people when the economy tanked around 2002. But it was worth it. I knew this was what I had to do, and I put everything into it.

Did your work in the ring make you a better attorney?
Boxing taught me to be a much better lawyer in so many ways; both are about problem- solving. Boxing teaches you to not react with emotion, but rather to react with your plan, to focus on your strengths, and to objectively analyze your opponent.

Appellate work can be very intellectual, and you sit in your office and read a lot. But you do go into court and argue, and that used to be my least favorite thing. But now, when the courts give me a hard time, I literally go into my boxing stance. I turn my left shoulder and I’m like, “Bring it!”

What are you working on as a California State Athletic commissioner?
I’m drafting a regulation to license transgender fighters. It has been challenging and taxing all of my skills as an attorney, learning all the medical aspects with types of hormone testing, and getting feedback from doctors. And we want to be safe, protecting the health and safety of all of our fighters. Everyone is watching what California is doing with this. I’m honored to be trusted with drafting something so important.

Some people struggle with women’s contact sports. What’s your view?
Some people are born fighters. Whether male or female — they’re just born that way. MMA fighter Ronda Rousey is beautiful, sexy, and blonde. That’s what people see. But to watch a fight, you stop seeing them as women and start seeing them as fighters, and that’s how they want to be seen. Women’s MMA can be disturbing at first, but once you realize what great fighters they are, you give them respect for that.