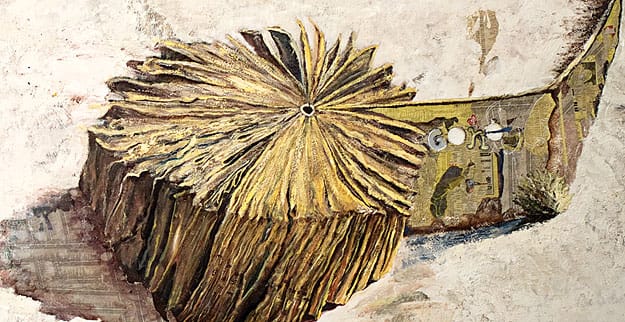 For the painter, sculptor, and writer Jeff Lipschutz, the desert is not so much an excursion or a dialectical canvas as it is seed material that informs his own DNA. Lipschutz spent his childhood in Eagle Mountain, a tiny mining community located in a particularly remote stretch of the Mojave Desert. Only one road led into and out of the town from the highway, and Lipschutz’s father was its only doctor.

Growing up in this environment had a profound effect on Lipschutz, as he writes in his artist statement: “To grow up where I did — with mountains exploding outside my schoolroom windows each day, and with slag heaps oozing from mountaintops like alien growths — is to understand instinctively the ideas of entropic and apocalyptic landscape narratives. My paintings tap into the desert’s dream life as a natural extension of my own; into the Mojave’s unconscious; its antediluvian beginnings, science-fiction futures, and contradictory presents.”

Eagle Mountain was one of the 10 largest open-pit iron ore mines in the world. As the sole supplier of iron ore to Fontana’s big steel refinery, it played a role in building postwar Los Angeles. The town soon fell into ruin, as German and Japanese manufacturers came to dominate the steel industry. Eagle Mountain was forced to shut down and became a ghost town in 1982.

Lipschutz’s paintings are drenched with the artist’s memories of the desert landscape where he grew up and his acute sense of loss at its passing. It has an overpowering sense of the vacuum left in the wake of a civilization’s passing. Barren desert horizons echo into the distance, while the paintings’ foregrounds are populated with dusty detritus — found phone books, sections of houses, discarded furniture, an abandoned swimming pool.

Paintings like Ghost Town, Company Town, Frontier, and Last Train lyrically portrayal the boyhood town that haunts the artist. Gainsborough, an almost-surrealistic painting with a large swath of yellow background, has a slightly more involved back story. “This painting refers to how, as elementary school kids, we were promised a reproduction of Thomas Gainsborough’s Blue Boy in our homeroom, if our class behavior was the best in the school,” Lipschutz says. “Well, it was, and we got the picture, but years later when I visited the ghost town, the globes in the classrooms lay broken and the picture was in a rubble pile. But the painting is yellow — Van Gogh’s color of the earth, and Kandinsky’s trumpet color — and the desert’s infinite projection of space makes me see them as linked.”

It isn’t just the past itself that entrances Lipschutz, however. It’s also how its patterns reverberate in present-day events. “What is the economic crisis that is remaking our national dream if not shades of the Eagle Mountain story?” he asks. Lipschutz sees Eagle Mountain as a “harbinger of the today’s foreclosure crisis — the American postwar miracle in reverse.”

Other paintings by Lipschutz move to different locales, such as Tijuana and the Salton Sea, but the same look and aura of desolation dominate them. “I’ve traveled the Coachella Valley and surrounding areas — Anza Borrego, Salton Sea, the Santa Rosas, etc., pretty extensively,” says Lipschutz, who once lived in Palm Springs. “They’re all part of my hometown in spirit and as haunted and beautiful in their ways. My extended family is full of Croatians, Jews, Mexicans, and Vietnamese, among others, and my paintings about border towns in Mexico are about my bond with the desert crossers and other Mexicans both here and down there, which is one land spiritually after all, however we may twist the border’s meaning.”