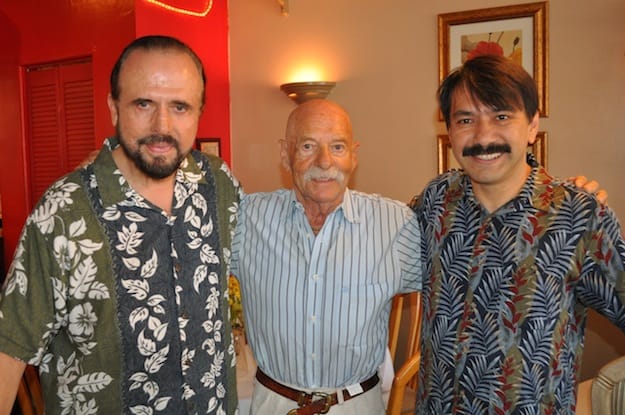 There are a couple of things you should know about Café Scandia right from the get go.

First, it’s in a semi-secret location tucked into the back of a small shopping center next to the Comfort Inn on South Indian Canyon Drive.

Second, despite the café’s name, the food isn’t from Scandinavia, the birthplace of chef Erik Pedersen, although the Swedish meatball entrée is a nod to his heritage.

Pedersen spent a lot of time in Sweden and started cooking at the age of 18 aboard freighters and cruise ships. Now 81 years old, he and his late wife, Marna, were married for 30 years and spent the entire time working together in the restaurant business. They opened Café Scandia in 2001 with a menu that features French, Italian, and German cuisine.

Pedersen was always the chef in the family, while Marna oversaw the front room and handled all of the money matters.

“It was, of course, difficult to continue after losing her,” said Pedersen, “but I think it was the best thing for me to do. And for the loyal customers who come visit us from all over the United States and even Europe.”

After closing for some minor redecorating, Pedersen reopened the café in January with his new partners Bob Rodriguez, a realtor, and David Goetz, a candidate for his doctorate in art history.

“The food is real stick-to-the-ribs American-style European cooking,” said Rodriguez. “All of our entrees include soup and salad and we’re known for our soups, particularly cream of mushroom, potato leek, and tomato ginger.”

Among the entrees are what the partners refer to as the “schnitzel sisters,” as in veal, chicken, and pork. Desserts include an apple strudel that’s made on the premises.

“It’s a very European recipe that Erik brought with him,” said Rodriguez.

The menu hasn’t changed since Pedersen and his wife ran the restaurant.

“Erik has had a pretty strong following over the years and people have their favorites and have come to expect certain things will be on the menu,” said Goetz.

And Pedersen’s new partners seem as impressed as those dedicated patrons.

“Erik has no recipes,” said Rodriguez. “He’s in the kitchen every night and he just knows what to put together.”