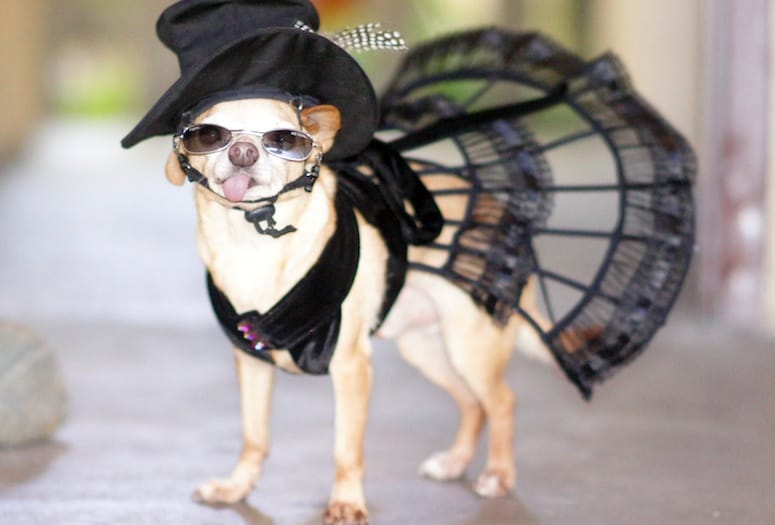 Welcome to the world of canine couture.

“Dogs are a joy to work with,” says Lola Teigland, the reigning designer for dogs. “They’re unpredictable and uncensored — they could stop and lift their leg mid-runway. But that’s what makes the canine catwalk so much fun to watch and to create for. We are even making it the subject of a reality show called, Fashion Bitches.”

Teigland is coming to Palm Desert for the very first time to style the fabulous models featured in the Saxony Group Fashion Week El Paseo 2015 tribute to canine couture, Le Chien, at 6 p.m. March 22 under the Big White Tent off El Paseo in Palm Desert.

The event, which benefits The Humane Society of the Desert, starts with a will have a 5 p.m. cocktail reception with music and entertainment. After a meteoric rise in the fashion world, Teigland became a darling of 7th Avenue working for power design houses Nipon and Dior. Idealistic, she believed that she might make clothing for self-expression to make the world a better place. Disappointed with the cutthroat demands of the business, she left to seek more artistic fulfillment in entertainment, relocating to LA.

Once in LA, she was left heartsick by the plight of dogs left in overcrowded shelters only to be euthanized before they could be adopted. She channeled her passion for four-legged creatures and began to design outfits to stage photo shoots to rescue the animals by giving them more exposure and spread a life-saving message.

“I wanted to start a conversation that shows the power of dogs,” Teigland says. “I dress them like stylish humans, so we see them as equals, erasing the perception that they are property. When you connect with a living thing it becomes harder to dispose of.” Her idea is a hit, and Teigland (at right) is currently focusing her energies on big shows and charity events.

• She has contributed to Wings of Rescue campaign (an organization that flies dogs to new forever homes) by assembling a team of artists, photographers, and a filmmaker to save rescue dogs by giving them makeovers and a photo shoot to market them to new loving homes.

• She’s the leader of Pupscouts Hollywood Troop No. 12, a national organization of community service dogs wearing uniforms to do good deeds, earn and raise money for causes.

For Le Chien, Teigland plans to show a variety of trend lines as well as en vogue red carpet looks. Think sequences with princess themes and jewels, dark and mysterious “gowns”, “see through”, “steam punk”, and of the moment, silk boxers and white cotton muscle tees worn with suspenders.