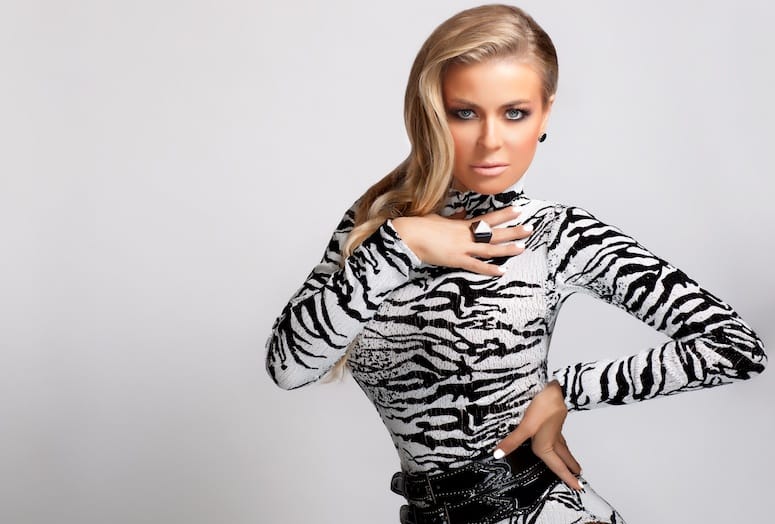 Carmen Electra is about to find out exactly how many looks are possible in white.

As the Queen of the White Party, April 25-28, in Palm Springs, Electra probably won’t be seen in the same outfit twice.

“(White Party creator) Jeffery (Sanker) wants lots of costume changes,” she says. “I was given the option to perform, but when I perform, all of my focus is on that, so I am choosing just to go and really, just have fun this year.”

Born and raised in a musical family, Electra was encouraged to pursue her artistic talents by her parents. After graduating from the prestigious School of Performing Arts in New York, she headed to Los Angeles where Prince signed her to his Paisley Park Records when she was only 18.

Her latest single combines what she loves the most, dancing, music, and a positive message. “My song “WERQ” is about empowering yourself, taking what you got and making it work. It’s an uplifting song,” she says.

Electra took a moment to chat with Palm Springs Life.

When is your video for “WERQ” coming out?
“Hopefully, in a few weeks. It’s a campy Russ Meyer’s “Faster Pussycat, Kill Kill” theme. [My character] has great costumes, is kick ass, and has her girls. She stands up for her girls. There’s always camp in things I do. I’ve always been kind of goofy and a dork. You know at the end of the day when you’re sitting around with your friends playing Rock Band or whatever board games, it’s pretty dorky.”

Where do you find the musical inspiration?
“I think music should come from within you, it’s different than acting. I’m drawn to music you can dance to and I feel more complete doing this."

You’re parents were both musicians, did that influence your career path?
“My Dad played in funk bands, with Bootsy Collins and some of the Ohio Players. He’s legitimate. My Mom was a backup singer and that’s how my Mom and Dad met. So I have this really cute picture of the two of them and she’s on the microphone and he’s in the back. It’s really sweet. Music has always been a big deal in our house, from blues, to disco, to rock ‘n roll. My parents noticed I would start dancing whenever my Dad or his band would play. They were very supportive of my going to the School of Performing Arts and my career.”

After you were signed to Prince’s label, what was that experience like?
“I met Prince when I was 18 years old. Right after the summer I auditioned for a girl group he was putting together. On his Paisley Park recording label we put out two songs called “Go Go Dancer” and “Get On Up”. We had a Prince following. We performed at any venue that would have us. That’s how I met one of my best friends. He was at every show, and we became friends. After all this time, she is my best friend.  Sometimes it only takes one person to like what you do to inspire you. In the beginning it’s hard when not a lot of people know much about what you’re doing and that one person inspires you to keep going and do what you’re doing. Amy Norris is that person for me.”

How excited are you to be the White Party Queen this year?
“I’m so honored to be the White Party Queen. I was so fortunate last year that Jeffery Sanker gave me the opportunity to perform my music. I haven’t had my own music since the Prince days. The fact he believed in me to do it gave me a real sense of accomplishment. I owe a lot to people who believe in me and just give me a push. Find people in your life that are positive and uplifting. Find where the love is at. Find where you fit in and where people love and accept you. We spend so much time wasting thought on the other. I’ve had friends that I’ve had for 20 years, and new ones, but all supportive.”

Do you visit Palm Springs?
“Yes. I’m getting ready to go for Coachella. I love it out there. Last year was kind of crazy because of the sandstorm. I was determined to see WuTang. I love the music and that they were all back together. I had a big hoodie on, glasses, a hat, and bandana around my face. I could see them spitting out sand between songs. Through all that though, it was a great show, they killed it.”