Casey Abrams Makes the Jump from Idyllwild to Burbank 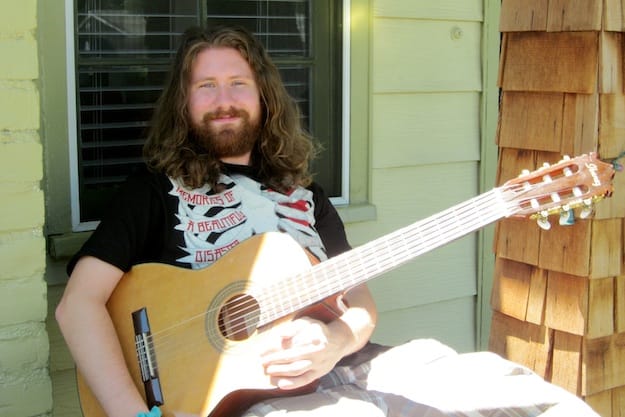 When he was 12, Casey Abrams stepped onto the Holmes Amphitheatre’s main stage for the first time.

“I was taking a song and dance class at Idyllwild Arts that summer,” he said. “And they held a boy-girl dance there. It was my first big social experience.”

Now at age 22, he’ll be returning as a paid entertainer when the 20th annual Jazz in the Pines runs Aug. 17-18. Abrams, who was a top 10 finalist on American Idol’s Season 10, will perform at noon Aug. 18 with tickets benefitting his alma maters, the Idyllwild Arts Academy and Summer Program.

The main stage of the Holmes Amphitheatre seats about 1,000 on a grassy hillside covered by parachutes. Abrams said he likes performing before large audiences.

His largest audience to date was with the “2011 American Idols Live Tour”, which closed out in Manila, Philippines. He showed a 2-minute video clip that he had taken while onstage. He held a microphone in one hand and a camcorder in the other.

“They were crazy for us, and they didn’t even get to vote,” Abrams said of the audience. Before the show, actress Bianca King tweeted to her fan base to buy tickets to meet Abrams.

“Stuck in London,” a popular song on Abrams’ self-titled 2012 album produced by Idols judge Randy Jackson, talks about missing a girl with whom he shared mangos in a mango tree.

Abrams wouldn’t say if the song was about King.

“All of the songs on the album are about different girls,” he said from his home in Burbank. (Pictured right: Casey Abrams' father, Ira, with a 2012 concert poster.)

They could include King, a former flame, a dancer, a singer and even his mother.

“Midnight Girl,” is about a dancer whom he met at an “American Idol Top 10” and “So You Think You Can Dance All-Stars” event, not on a Harlem subway platform, as mentioned in the song. Abrams borrowed a bass from the band to make a favorable impression on the dancer.

“Midnight is not about the color of her skin, but about the time of night we would get together,” Abrams said.

In another song, “Ghosts,” Abrams sings about braving it alone into a haunted house. It’s not a tribute to his mother, but about a girl he dated in fifth grade.

“American Idol” promoters often paired Abrams with Haley Reinhart for their chemistry. On the last track of his record, they performed, “Hit the Road Jack.” The pair’s other duets include “Baby, It’s Cold Outside” and “Moanin.’”

Abrams said he has no regrets for being the sixth contestant to leave the show.

“I did everything that I set out to do,” he said. “It was a great experience.”

Two other tracks, “Simple Life” and “Great Bright Morning” are about Idyllwild. The lyrics suggest that everyone should “unplug” and enjoy nature.

When Abrams returned to “American Idol” as a guest artist last year, he sold 4,000 albums in one day, he said.

Life after “American Idol” has been good to Abrams, who has gigs set up all over the country. The show brought him fame, but now he needs to create some distance. “One guy shouted at me recently, ‘You’re the ‘American Idol’ guy!’ But he didn’t know me or my music, only that I was on the show,” Abrams said.

To help promote his album, Abrams made a series of videos called “Porch Sessions.” There’s no elaborate set up, just a friend with a camera.

One shows Abrams playing his guitar next to a ballpark in which pretty girls stop to watch while a bum sang along. In another, he set up his upright bass alone in the middle of a pedestrian walkway in New York City.

“We interact with people as they walk by,” said Abrams, pictured left playing at The California Club in LA. “These videos have to tell a story, or they don’t work.”

Jazz in the Pines, Aug. 17-18, features more than 50 musical acts, a festival marketplace with more than 65 artists and artisans, and an opening night Patron's Dinner gala and "A Taste of Idyllwild" cocktail party.