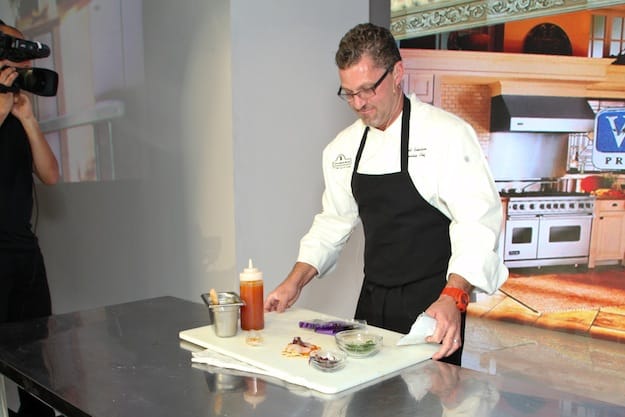 And for one afternoon on March 22, chef Scott Robertson made nearly 300 guests feel presidential at the celebrity chef luncheon to kick off the fourth annual Food & Wine Festival Palm Desert.

Robertson, of New Leaf Catering in Cathedral City, took the recipes of four dishes and prepared an Italian-esque luncheon complemented by wine selections from Kobrand Wines & Spirits.
Bradley opened the meal with an Amuse Bouche, an ocean carpaccio featuring salmon and halibut on a rosemary flatbread touched with sea salt and lobster oil.

“The lobster oil takes a week to reach its peak,” Robertson said.

The accompanying wine was Capasaldo Prosecco DOC out of Veneto, Italy. Mike Biagi, regional manager for Kobrand, said the sparkling wine boasted a flavoral mix of apple and pear with a hint of citrus.

Robertson and his staff spent the rest of the afternoon preparing the three other dishes demonstrated by a pair of James Beard award winning chefs (Bradley Ogden – salad, Luciano Pellegrini – entrée) and a James Beard nominee (Sara Moulton – dessert).