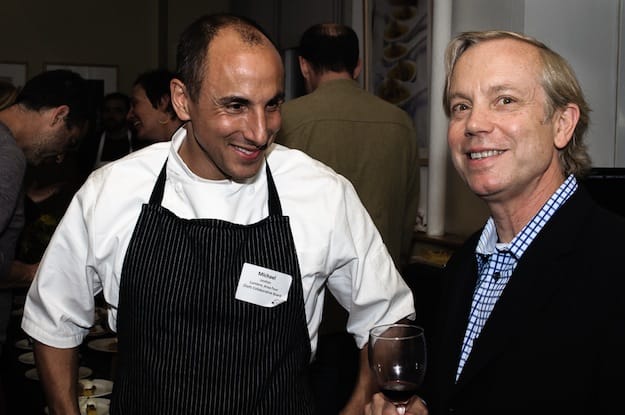 Even if you’re not familiar with the Chefs Collaborative, you’ve probably enjoyed meals prepared by this non-profit network of chefs who celebrate local suppliers and work to promote a more sustainable food supply.

The group was founded in 1993 and has members throughout the U.S. To honor the organization’s 20th anniversary, member chefs have just released a cookbook, The Chefs Collaborative Cookbook: Local, Sustainable, Delicious: Recipes from America's Great Chefs. It contains 115 recipes that can help you bring sustainable cooking into your kitchen.

Jimmy Schmidt, executive chef of La Quinta’s Morgan’s in the desert, was one of the original founders of the collaborative and is a leading proponent of its philosophy.

“Great products that are in season taste the best, they are the best for you, and they’re the most affordable because they are at the peak of their season,” said Schmidt.

His philosophy has always been to cook the foods that are in season and follow the seasons throughout the year.

“The concept of the collaborative is great, sustainable food that comes from clean land and clean water produces superior products that obviously taste good from a chef’s point of view, but they are also the most nutritious and most supportive of the climate and environment they come from,” said Schmidt.

For the cookbook, Schmidt contributed his fall-inspired recipe for Autumn Pear “Ravioli” with Chanterelle and Shaved Pear Salad. He has also provided another recipe from  a dish served at Morgan's in the desert (see below).

“I like to use vegetables and fruits in place of pasta,” he said. “In this case, the pear itself makes the pasta of the ‘ravioli’ so you have that kind of caramel-like pear flavor going on in the cooked portion of the dish, and, likewise, the raw chanterelle and raw pear in the salad that goes on top of it. I like that fresh dimension, the combination of cooked ingredients and raw ingredients. It’s really clean in flavor.”

Overall, the cookbook, and the Chefs Collaborative itself, sends a great, positive message.

“What we’re saying is vote with your fork,” said Schmidt. “The food you choose to eat supports your local foodshed and farmers.”

“It’s cool that you can make a difference by how you choose to eat,” he added. “You can be politically active by eating better and that’s a very positive message.”

To Prepare the Asparagus:
Cut the asparagus tips about 3 inches in length. Cut the remaining asparagus spear stems into long fine julienne or “threads” with a mandoline or by hand with a thin sharp knife.
Blanch the asparagus spears in boiling salted water until al dente, tender but sweet and still firm to the bite.  Transfer to ice water to stop the cooking.  Transfer to paper toweling.  Reserve.

To Prepare the Emulsion:
In a high speed blender combine the lemon juice, ginger and vanilla extract, pureeing until smooth.  Drizzle in the lemon oil until emulsified.  Add half of the chives and the grated lemon rind.  Season with vanilla salt to taste.

To serve:
Toss the asparagus spears tips with a little emulsion to coat.  Divide and place the spears in the center of the serving plates, with the cut stem together to form a “raft” of asparagus.  In a small bowl combine the magenta herbs and asparagus threads.  Drizzle a little emulsion on the salad, tossing to combine.  Position atop the asparagus spears.  Sprinkle with the remaining chives, vanilla salt and serve.