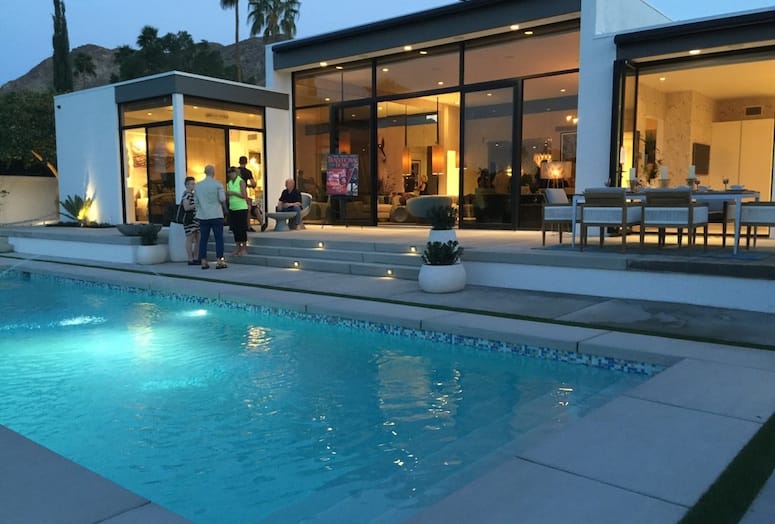 If you haven’t made it to the Modernism Week Show House in south Palm Springs, don’t miss the opportunity to see a sublime display of how architecture, design, and cutting-edge technology intersect in stunning ways.

This is the third year that Palm Springs-based designer Christopher Kennedy has been charged with creating a design show house for the duration of Modernism Week. Kennedy says this is the first year the show house was not one he personally owned; the home is owned by Jerry and Marilyn Nies. These homeowners have been gracious enough to enable Modernism Week to host receptions and allow attendees to tour their magnificent home.

• Visit modernismweek.com for information on tours through Feb. 21.

The concept of the Christopher Kennedy Compound is to showcase the work of numerous designers, who each take a room in the house as well as the patios and landscape. The group this year included high-profile designers from around the country: 31 Westgate, Michael Berman, Martyn Lawrence-Bullard, Justin Shaulis, Carson Kressley, Trellis Home, Julia Buckingham, Kelly Golightly, Kelli Ellis, Jamie Durie, Michel Smith Boyd, Patrick Dragonette, Keith Fortner, Denise McGaha, and Best Practice Architecture.

Industry sponsors such as Ferguson, Bosch, ArtHouse, and numerous others contributed their goods and services to bring the project to life.

VIDEO: Christopher Kennedy explains the mission behind the house.

In addition to the over-the-top kitchen and wine room, Kennedy designed the outdoor Tea House for the occasion. He says he was asked by Pure Leaf to design the Tea House for the launch of their new collection. “Pure Leaf asked me to build a tea house and when I asked them what they had in mind, they said ‘that’s up to you’,” says Kennedy. “So I designed the Tea House to have a sense of shelter and a sense of openness.” Seamless look in the kitchen thanks to Bosch. Vanity in the dressing room. The entry way as you enter the house. Dining area on the outdoor patio.