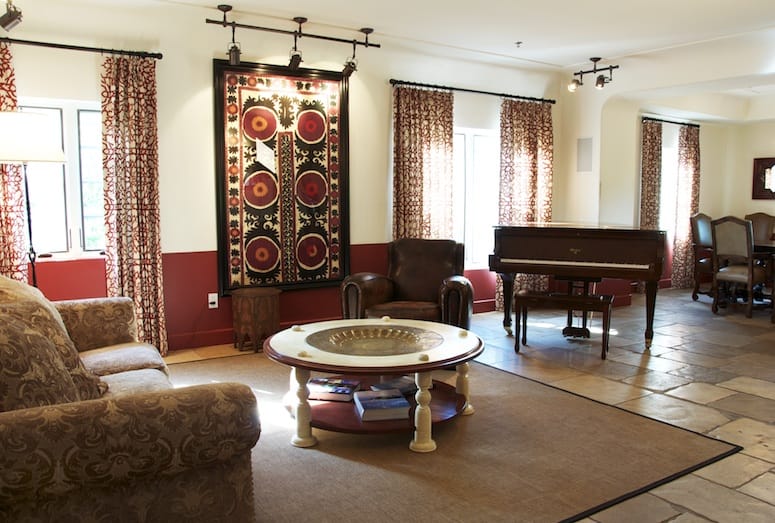 Facing Indian Canyon Drive, you might expect seclusion to get lost as vehicles pass by.

But the two-story, 1,800-square foot Palme d’Or Residence makes you forget the Colony Palms Hotel is situated on one of the busier thoroughfares of downtown Palm Springs.

Need a Reason to Stay Here? How About 3
• From the second floor, you have a panoramic view of the San Jacinto mountains, and on the first floor there are two private garden terraces.
• The second floor shower doubles as a steam room and also has a rainfall water spout fixed into the shower ceiling.
• The kitchen comes complete with Viking appliances where Executive Chef Jeff Armstrong can personally cook for you.

The Bullard Influence
Interior designer Martyn Lawrence Bullard was brought in when the Colony Palms reopened in 2007. The Palme d’Or Residence showcases his Spanish Colonial design with rich sienna, chocolate and deep orange hues. Bullard was named one of the World’s Top 100 Interior Designers by Architectural Digest, featured permanently in Elle Décor’s A-List, Top 25 Tastemakers in the world, and most recently the Luxe Interiors + Design Gold List 2012

Don’t Know Much About History?
The Colony Palms was originally built in 1936 and was called the Colonial House under owner Al Wertheimer, a mob boss and member of the Purple Gang. The highest prize awarded each year at the Cannes Film Festival inspired the name of the Palme d’Or Suite, part of a 2007 renovation.

15 Minutes of Fame
The Palme d’Or was featured on Bravo TV’s “Million Dollar Decorator” during the 2007 renovation.

Piéce de Résistance?
You can pipe in music throughout the suite from a wall-mounted iPod station.