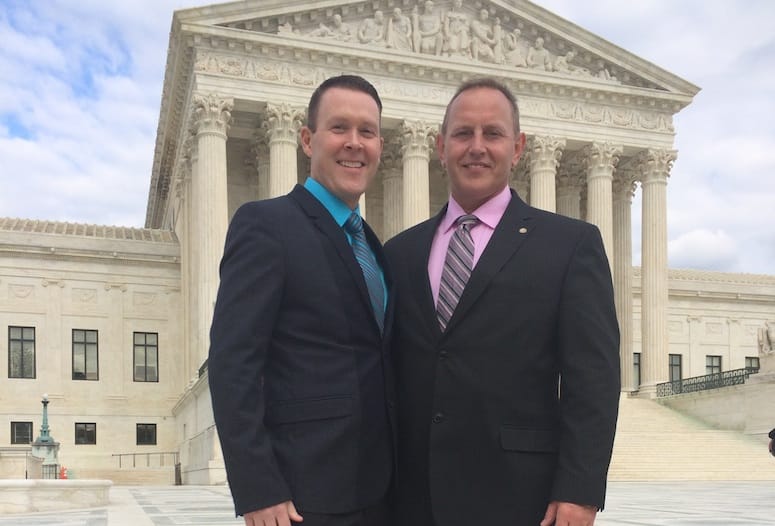 When they arrive in town for the Greater Palm Springs Pride Parade, this year’s Grand Marshals, Paul Campion and Randy Johnson, will only be making their second trip to the city.

But their first visit turned out to be unexpectedly meaningful, setting in motion a series of events that placed them smack in the middle of the Supreme Court’s landmark decision on marriage equality.

The couple, who have been together 24 years, came to Palm Springs from Louisville, Ky., in 2008 to attend the wedding of Paul’s brother, Michael to his partner Jim Fitzpatrick. Michael surprised the couple by suggesting that Randy and Paul marry along with them in a double ceremony. “We knew it wouldn’t mean anything back home, but we wanted to do it to show the kids the importance of what we were being denied in Kentucky,” says Johnson.

After returning home, all four of the couple’s children — twins Tevin and Tyler, DeSean, and Mackenzie — encouraged them to join a lawsuit against the state of Kentucky to recognize the marriage that was performed in Palm Springs. “We certainly didn’t realize we would end up before the SCOTUS,” says Johnson about the U.S. Supreme Court.

“We knew a lot of individuals had been working very hard for the LGBTQ community for a very long time to secure rights, like Evan Wolfson as the founder and president of Freedom To Marry,” he adds. “So we thought this was a good opportunity to participate and set a good example for our kids at the same time.”

A series of rulings followed, beginning with Federal Court Judge John Heyburn, who declared that the State of Kentucky’s ban on same-sex marriage was unconstitutional. But the state’s Governor, Steve Beshear, appealed the decision to the 6th Circuit in Cincinnati. A three-judge panel overturned the ruling by Judge Heyburn, which then prompted the case to come before the Supreme Court.

It was just another unforeseen twist in the road for two guys who each grew up in conservative, religious families. “We both had a tough time coming out,” says Johnson. “One of the factors that made it difficult was our perception that admitting we were gay would prevent us from becoming parents one day. We had struggled with our religious upbringing and certainly didn’t want to be ostracized, but we both felt we needed to live with integrity and be truthful to not only ourselves but our families and friends.

“When people ask why we ‘chose’ to be gay, we often counter with the fact that the only decision we ever made was to tell the truth about who we believe God created us to be,” he adds.

The couple’s road to adoption was also fraught with challenges. When they first went to adopt in 1994, it was difficult to find an agency that would work with gay men.

“We researched gay adoption but, as you can imagine, resources were limited,” says Johnson. “We spoke to individuals in San Francisco and New York City to get their perspective and help prepare for what we were about to encounter. Ultimately, we ended up resorting to the Yellow Pages — and it was paper back then!” Paul Campion and Randy Johnson with three of their children in Washington, D.C.

“We spoke to a number of agencies who didn’t tell us ‘No,’ but were obviously perplexed by our query about working with a gay couple,” adds Johnson. The agency they chose responded to their inquiry with the question, “Regardless of your sexual orientation, will you be good parents?”

“That is exactly what we were looking for, being judged on parenting abilities rather than someone else’s prejudices,” says Johnson. “Both of us are from large families and we have a lot of nieces and nephews. We have always felt that parenting was a calling and we now know that while it is the most difficult job in the world, it is also the most rewarding.”

However, as a result of the discriminatory laws that were place at the time, each of the couple’s adopted children only had a legal relationship with one parent. Johnson notes that he and Campion had always been conscious about who the legal parent was for each child so they could appropriately sign legal documents. But they tried to minimize the situation as much as possible to avoid any division within their family.

“It wasn’t until the lawsuit against the state of Kentucky that our children even found out who their legal parent was,” says Johnson. “We have worked to make it a non-issue. Post the SCOTUS decision, we are now in the process of second-parent adoptions and we are all now on one health insurance policy, and we will be filing taxes together as one unit. In addition, we have an added sense of security knowing that should either of us pass away, we will qualify for survivor benefits and not be subject to excessive taxes.”

Now, with all the twists and turns of the last seven years behind them, the couple is returning to Palm Springs where their journey for marriage equality began.

“We are truly honored to be recognized as the Grand Marshals for Palm Springs Pride,” says Johnson. “It really brings our relationship full circle, knowing that Palm Springs is what started us down the path toward the SCOTUS back in 2008.”