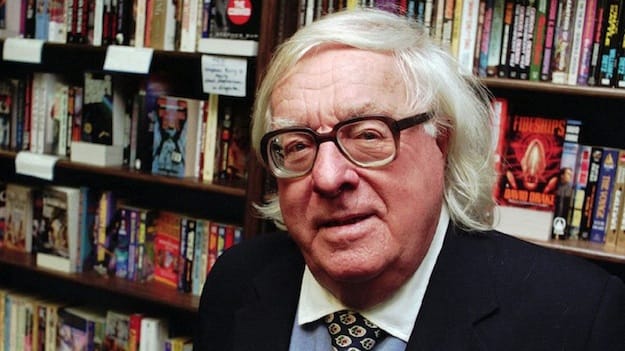 The Palm Springs Art Museum in Palm Desert will mix media and offer it up for free on Thursdays starting June 27 through Sept. 26.

Sci-fi fans will particularly enjoy the opportunity to delve into the mind of author Ray Bradbury, who died in 2012 at the age of 91, and was best known for writing The Martian Chronicles, The Illustrated Man, Fahrenheit 451 and Something Wicked Comes This Way.

The Ray Bradbury Theater series appeared on HBO for two seasons in the mid-1980s, then reappeared for four seasons on the USA Network from 1988-92, and later in reruns on the SciFi Channel.

Bradbury’s own works were used for a majority of the episodes, and attracted some of the top names to appear in them, such as Drew Barrymore, Elliot Gould, Tyne Daly, Jean Stapleton, Jeff Goldblum and Peter O’Toole.

The art museum will screen episodes of the anthology series while at the same time celebrate the opening of an exhibition, Across Dimensions; Graphics and Sculpture from the Permanent Collection, at The Galen.

The artwork demonstrates artists exploring two- and three-dimensional pieces in much the same way Bradbury looked beyond conventional writing genres. Some of the featured artists are Donald Judd, Dan Namingha, Henry Moore, Alberto Giacometti, Ellsworth Kelly, Robert Arneson and Willem de Kooning. Their curiosity, similar to what drove Bradbury as an author, can be seen on both a small and large scale with pieces set in the museum’s Faye Sarkowsky Sculpture Garden.

The first of the two Bradbury anthology series segments, “A Sound of Thunder”, begins at 5 p.m. June 27 and is followed at 5:30 p.m. with “Touch of Petulance”.