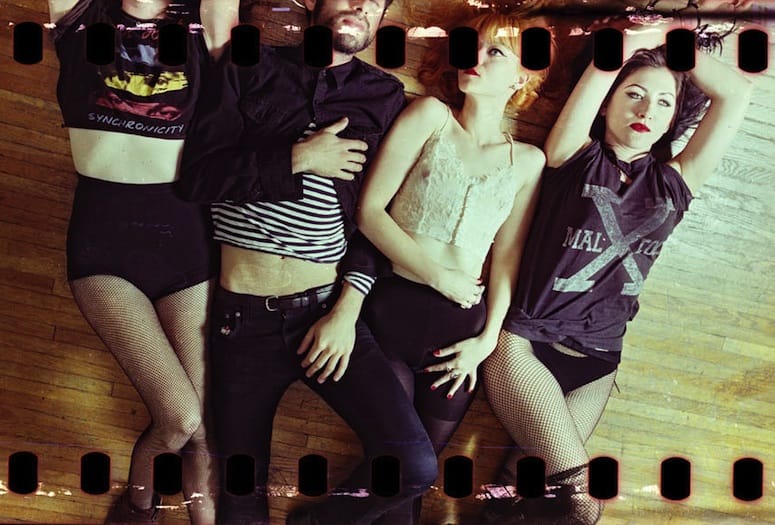 Driving in a car full of girls eight years ago on her way to Coachella Valley Music and Arts Festival, Jacquelinne Cingolami (or JC) of Darklands, had a memorable desert experience.

As the heat of the day began to rise, the girls stopped on the side of the road and changed their pants into skirts. As they frantically attempted to change clothes quickly, a gold Cadillac pulled up. The girls were in shock to see it was Ozomatli, who gave them each an all-access pass to the huge desert festival that year.

Darklands found their name and voice from the spirit of ancient history while atop a Mexican pyramid.

The new sound is influenced by diverse musical greats like Love, The Dead Kennedys, Fleetwood Mac, and Siouxsie and the Banshees.
Manimal Vinyl label will release their next EP due out in a month. Darklands plans to release an LP and head out on tour later in the year.

JC of Darklands took the time to sit down and reflect on her journeys with Palm Spring Life. Your band was formerly known as Spirit Vine. Why the name change?
“Amberlie Bankoff joined as our new bass player and the sound evolved, so we felt it was ideal timing to explore other facets of sound we hadn't explored. We had a recent trip to the pyramids of Teotihuacan in Mexico and the spiritual experience left us with a new profound outlook on humanity. We decided on Darklands because looking down from the top of the Sun Pyramid, we were looking upon a land that the Aztecs once inhabited and realizing how many spirits must still be lingering from a time of so much mysticism, that was destroyed by the ego."

Being an LA based band, what do you enjoy about the desert music scene?
“I have personally been to Coachella a handful of times. Last summer we went to Desert Daze and that was such a beautiful and communal experience. We knew so many people from LA who had all helped the promoter Phil Pirrone to execute such a rad event. The overall vibe was so communal and everyone from the performers to the audience to the people working it were all there to enjoy music and just be free under the desert stars. I hope we get to go again this year.”

How has your music has changed now that you are Darklands?
“We started with psychedelic roots and throughout the years, being introduced to new bands or old bands that we never had a chance to get into, we allowed the sound to evolve and explore areas we never had crossed. We all inspire each other to push limits and jamming has certainly allowed us to follow our instincts.”

Upcoming plans as Darklands?
“We are recording new music with Joel Morales (Dios, Babies on Acid) and Joe Cardamone (The Icarus Line) over the next few weeks and will have an EP ready in the next month. We are currently under Manimal Vinyl (Bat for Lashes, Warpaint) so expect some cool news in the upcoming months, including an LP date, music videos, West Coast and East Coast Tour and if all goes accordingly, Europe in the summer!”