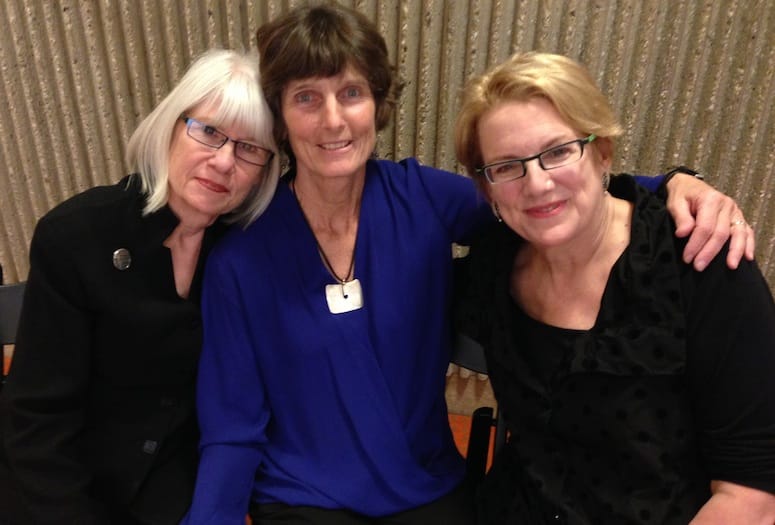 It’s not often you come across three women sitting in three iconic chairs designed by their very own relatives.

However, that was exactly the case when “Daughters of Design” participants Susan Saarinen, Carla (Eames) Hartman, and Celia Bertoia took their exquisitely designed seats for a Modernism Week Q&A after their individual presentations on Feb. 15 at The Annenberg Theater in Palm Springs. Although not related, the women are connected by their famous fathers and grandfather, who became three of the most important designers of the 20th century after they met and studied together at the Cranbrook Academy of Art in Michigan 75 years ago.

Hartman’s grandparents, Charles and Ray Eames, pioneered technologies and made groundbreaking contributions to architecture and furniture design, including the Eames lounge chair coveted by modernists.

Saarinen’s dad, Eero Saarinen is known for the Tulip Chair and the Gateway Arch in St. Louis. During her presentation, Susan Saarinen shows a family photo She is in the front row, left, next to her father Eero Saarinen.

Bertoia was an Italian-born furniture designer and metal sculptor who infused nature in his work to transform pieces into an uplifting experience. One of his pieces currently resides at Sunnylands in Rancho Mirage.

All three women pursued their own interests, but ultimately came “full circle” and found their true calling was furthering the legacy of their designer fathers and grandfather who gave them insights they are still discovering. “What I now realize is I’ve turned my little sensory receptors on, my brother Eames calls it my Yummy Quotient,” explained Hartman. “When I see something, if it’s a really awesome design, I’ll get goose bumps and I have to have it! It’s a feeling that’s beyond spectacular and I got that from them. I only have things that delight me, that give me the yummy quotient.”

Celia Bertoia said she was off doing her own thing, when one day she had an epiphany, and realized no one was furthering her father’s legacy. She picked up the torch about five years ago and hasn’t looked back since. Celia Bertoia as a young girl in 1958 with her family. Celia Bertoia shares images of her father's work, such as his sculpture at Sunnylands in Rancho Mirage. The original Trans World Airlines terminal designed by Eero Saarinen at New York's JFK Airport that opened in 1962, as shown by Susan Saarinen during her presentation at The Annenberg Theater.