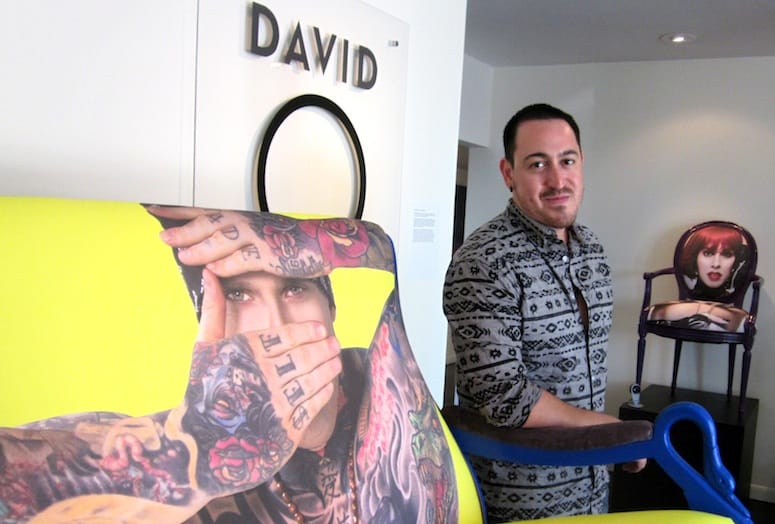 Quintanilla’s art rose to national prominence with an unintentional Facebook campaign in his native El Paso to curtail racial profiling.

For the photo, Quintanilla and a friend wrote on their forearms, “Boycott Hate,” and put on pink handcuffs. Pretty soon, the photo went viral, and TV stations from all over the world wanted to interview Quintanilla.

“They were asking me about my ‘campaign,’” Quintanilla says. “There was no ‘campaign.’ It was just a photograph.”

However, as interest and supporters grew, Quintanilla shut down his El Paso studio for a week and photographed anyone who wanted to recreate the “Boycott Hate” image — for free. Hundreds came, from babies to seniors.

VIDEO: Watch David Quintanilla explain the photograph he is donating to the fundraiser, and his newest line, the 'Q' chairs.

A photography stint with a modeling show followed, but those experiences made Quintanilla lose interest in fashion photography. He and his domestic partner moved to San Diego a year and a half ago where he focuses on “painting portraits with his camera.”

On May 18, Quintanilla and local artists from The Shops at Thirteen Forty Five on North Palm Canyon Drive will donate pieces for a collective show/silent fundraiser for the Barbara Sinatra Children’s Center. The event is part of the Uptown Brunch Art Walk from 11 a.m. to 3 p.m.

The piece that Quintanilla will donate is called, “Meet Candy,” and features a beauty queen wearing a 3-foot-tall pink cotton candy-looking wig. Young children are surrounding her in adoration and curiosity, even reaching for her wig.

The model is a friend of Quintanilla’s. He chose this portrait because the Barbara Sinatra Children’s Center helps abused children.

“It features children, but it’s one of my more ‘tamer’ pieces,” Quintanilla says.

In a recent one-man show at Towne, one of The Shops at Thirteen Forty Five, Quintanilla featured photos of those ‘on the fringe,’ including a male clown in full makeup and a red bra, and tattooed “Chollos” drinking beer at a Last Supper recreation he entitled, “Last Call.”

“Last Call” was featured at the International Museum of Art in El Paso for two months.

“I grew up Catholic in El Paso, but I wasn’t part of the Chollo culture,” Quintanilla says of “Last Call” that also includes a pregnant Mary Magdalene. “It was not meant as a sacrilege, but as an homage to my culture. It’s like when we get together after a funeral to share in our closeness.”

Quintanilla recently took his portraits a step further to cover vintage chairs, called the “Q” chair that range in price from $650 to $850.

“I like my art to be tangible and touchable,” Quintanilla adds.