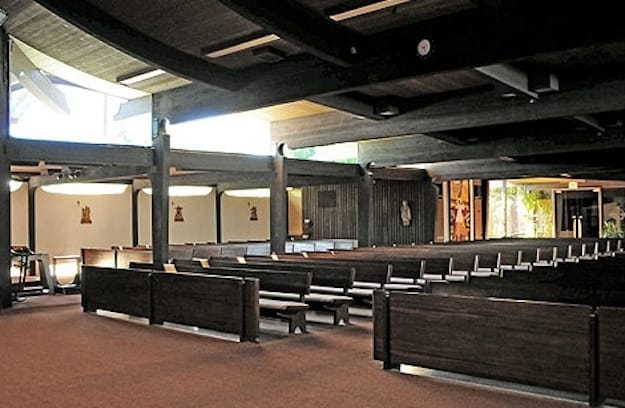 As Modernism Week approaches Feb. 14-24, Palm Springs Life.com is happy to add columnist Robert Imber, whose expertise will bring to life the stories behind some of the structures you pass by every day. We encourage you to interact with Robert, ask questions, send him comments to this email address: desertmodblog@gmail.com. Coachella Valley has long been a modern kind of place, a region of firsts, one-of-a-kind accomplishments and cultural contributions from the notable to the curious and obscure.

For example, former U.S. President Dwight David Eisenhower hit his only hole-in-one on the greens at Seven Lakes Country Club, a stylish golf-course community at the end of Cherokee Way in Palm Springs. Speaking of golf courses, Thunderbird Country Club (Rancho Mirage) began as a dude ranch with Palm Springs architect William F. Cody (1916-1978) designing many of the houses and the original 1950s clubhouse when the rambling 1930s ranch was converted into luxurious home sites along gracious fairways.

One of the first such country club projects in the country demonstrated that what’s older can become new again. In an extensive body of important work, Cody went on to design the clubhouses at Tamarisk Country Club, Eldorado and Seven Lakes.

Construction at Seven Lakes began in the early 1960s with homes designed by another of Palm Springs talented architects, Richard Harrison (1921-1993). A sprawling community of more than 350 graceful homes, they are low profile, rectilinear, flat-roofed buildings artfully angled throughout the golf course to command dramatic views from putting greens to distant mountains and, of course, seven lakes.

Cody’s elegant work covers the gamut of fine residences to schools, civic buildings, hotels, restaurants, churches, and even an innovative gasoline station. An easily visited Cody site is St. Theresa Catholic Church (1968), 2800 E. Ramon Road, in Palm Springs. Viewed from the street, its soaring pyramidal spire is an uplifting experience, beautiful in any given daylight towering in front of the daily drama of the distant western mountains.

Large, graceful sculptural forms are made of gunite, a sprayed concrete such as found in swimming pools and boats. The dramatic curved beams are Glulam – boards glued and laminated into a strong structural beam.

Inside, the encounter richly unfolds under a pagoda like structure embellished with Italian travertine forms, walnut pews, distinctive terrazzo, bronze fittings, remarkable lighting and an enriching sense of space that transcends the desert.

High, narrow clerestory windows draw the eye out to the mountain peaks, while along the floor below mirror-image windows “bring us back” to terra-firma placing the desert floor at our feet from within the building. I call them grounding windows, and am moved by the experience on every visit.

Cody, a member of the church, was involved with every design detail down to the hinges, handles and stained glass. He is one of the prominent and prolific mid-century modern masters whose many works we’ll visit together in this column.

We will also explore the bountiful history of our built environment, focusing on Desert Modernism – the architecture and design of the mid-1940s to the mid-1970s. Mid-century modern buildings of all types and neighborhoods are scattered from the furthermost northern boundary of Palm Springs to the surrounds of the Salton Sea.

If you lived the mid-century dream, grew up in it, or even abandoned it for Victoriana or Craftsman style, share your architectural and design stories from the era. Or if it’s interesting and new to you at any age, what’s old is new again!