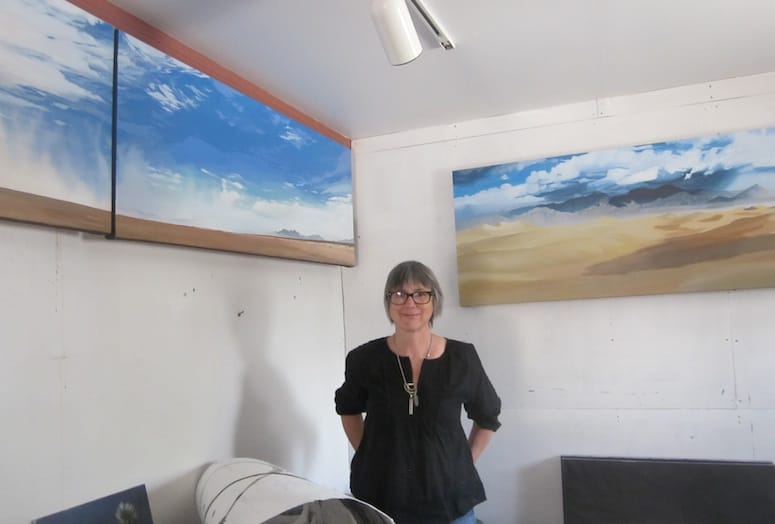 VIDEO: Diane Best explains one of the videos she will introduce at this weekend’s Joshua Treenial.

Diane Best considers her art movies a natural extension of her acrylic landscapes of Joshua Tree and the surrounding region.

“I would photograph the places that I would paint, so it was natural for me to take photos to the next level,” says Best from her home studio in Joshua Tree.

Best will be among 50 artists from 15 countries who will showcase their work in the inaugural Joshua Treenial held at various venues over Memorial Day Weekend.

The event is sponsored by co-curators Bernard Leibov, founder of BoxoProjects, a residency-based arts initiative in Joshua Tree, and K.J. Baysa, a physician who combines medical science and contemporary culture.

“Joshua Tree is a special place with its own unique character,” says Leibov. “It’s an accomplished and welcoming arts community.” Many of Diane Best’s paintings and videos are created from images not far from her studio door.

Best began creating short art movies when her cinematographer boyfriend, Christopher, gave her a small flip video camera, to help take her mind off of a long illness. She would drive down long dirt roads shooting whatever was out the window.

“It’s meditative and a good way to clear my head,” Best says.

Many of her movies were taken in and around Joshua Tree, but she’s also depicted desert wastelands like Death Valley and other special places in Arizona, Nevada, and New Mexico.

At first, Best would just shoot the vast, open landscape. “I didn’t have any plan of what I was going to do with the movies,” Best says.

She prefers “movies” over “video,” because it doesn’t seem appropriate for the kind of work she’s creating. However, “movies” isn’t accurate either, and the term has been challenged by others. Then she met a musician at a dinner party who just completed a CD of film and drive music. “I said, ‘What? I can’t believe it! That’s what I do!'” Best says.

Best now uses a Canon single lens reflex camera that also shoots digital movies and mounts it to a stick while she drives.

“At first to create movement, I would drive through the space with my camera,” Best explains. “Then I got a tripod that takes panoramic views which is useful when depicting the depth of a desert crater, for instance.”

“Ubehebe,” a 12-minute movie that she will screen at the Joshua Treenial, showcases desert craters. Diane Best’s past project includes a series depicting deserted homestead shacks around Joshua Tree. This book includes many in black & white and color.

Best also incorporates time relapse segments into her movies. Most take about 90 minutes to complete the camera taking 2,000 individual photos. The visual effect of the time relapse is dramatic, showing the movement of clouds across the landscape, dark shadows from the sun, and even the appearance of the moon and stars.

“I’m a real storm chaser,” admits Best, who often sets out from her Joshua Tree home when the weather is rainy, foggy or what others might perceive as inclement.

One of her recent videos depicted lightning strikes that weren’t far away. There is some element of danger with these long forays down dirt roads leading nowhere. Even though she is mapping out the segment as she drives, she has never run off the road or hit anything. She relies on good topographical maps because GPS and cell phones often don’t always work, and she also keeps a handy supply of water, food, and blankets.

“The only scary thing is when you’re driving, what you thought was a dirt road ends up being someone’s driveway,” Best says. “And they step out wondering why you’re there.”

Best began experimenting with other visual effects in her art movies, such as depicting her own hands painting Joshua Trees with a brush. She also colorizes the moving images in the editing program, showing them in split screens or with mirror images.

In one video segment, Best showed mirror images as she drove down the road. It looked like a “parting of the waves” and became hypnotic as the movie sped up and different colors emerged. An early illustration for Nickelodeon by Diane Best.

“You see how it looks like a painting now?” Best asks.

Since she hasn’t shown her movies to many people, only a few friends, she gets most of her encouragement from Christopher. “I’d ask if any of it had merit,” says Best. “He told me that I was on track and to keep doing what I was doing.”

Now the two could be working on a TV project that includes her movies. Best didn’t want to go into detail because the project may not pan out, but she did say that it’s a TV show that will be shot in and around Joshua Tree. “The desert is key to the story and will be a character,” explains Best. “Much like ‘Badlands’ by Terrence Malick.”

Best has been fortunate to be a working artist her entire life, graduating from Stanford and the San Francisco Art Institute to work on commissioned portraits in Los Angeles and animation paintings for Nickelodeon. She showed a picture of an interior view of a miniature mouse house.

“We had to work wet on wet so there wasn’t any brush strokes,” Best explains. “It was the most fun and best money that I’ve ever made.”

When Best and her then-husband purchased 657 acres of land near Pioneertown and built a house, she became enthralled with the land. Her dramatic and lonely landscapes were painted on wood, canvas, and even panels made from Joshua Trees. “We had to cut one down that fell over and died,” Best explains. “It’s like cutting a huge ginger root with a chain saw. It’s very dense and gummy in the middle.”

When her animation teacher invited her back to work on a project in LA, Best was tempted, but declined. “That would mean moving back to LA, and the urban landscape,” she says.

Now, Best is working with an architect to create a huge living and work space on property she bought nearby. “My new studio will have room enough to create the huge paintings that I’ve always wanted to,” she says. “And with room enough for film screenings.”

Diane Best’s three videos, “Ba ba,” “Ubehebe,” and “No Destination,” will be shown at 8:30 p.m. May 23 at The Palms Restaurant & Bar, 83131 Amboy Road, Twentynine Palms. Visit www.joshuatreenial.com for more information on the Joshua Treenial.