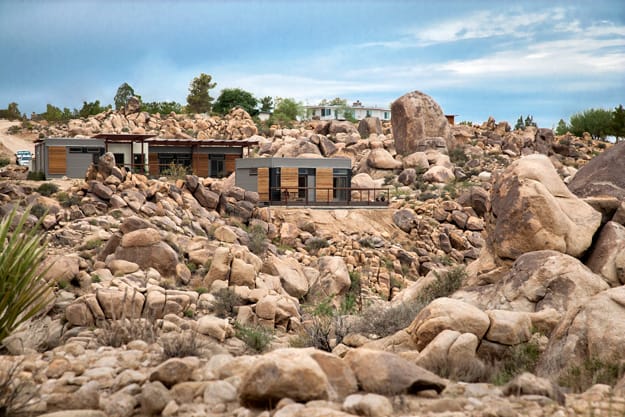 Dotted in the desert landscape overlooking the city of Joshua Tree sit four homes that don't exactly blend in to the desertscape of a national park area.

They're sleek, modern and house the name Disney, but they're affordable enough for an average family.

Tim Disney sits on the board for Blu Homes, based in Oakland, Calif., which creates these liveable works of art, folds them up, transports them and drops them on a prepared foundation.

It's much the same mantra as Walt Disney, who used to escape to Palm Springs from Los Angeles — he helped build the popularity of Palm Springs with Charlie Farrell.

Tim Disney's home sits on land he previously purchased on the road leading up to Joshua Tree National Park, but these homes aren't just for the rich and famous.

The weekend of Sept. 15 and 16, Blu Homes will open four models in Joshua Tree to the public.

One of the homes was built in about eight weeks, offers three bedrooms and a separate guest house and costs a little more than $135,000.

Aside from looking great and their affordability, the homes also come Energy Star rated.

"I was out there before the air conditioning was put in," explains Smith, "It wasn't optimal, but believe me, it wasn't that bad in the house."

As in Disney's case, the modular design of the home made his dream of building on a hard-to-get-to lot a reality.

"The fact that these homes unfold on the site lets us get to places that we would have been hard to build on," said Smith.

For more information on the Open House in Joshua Tree, click here.