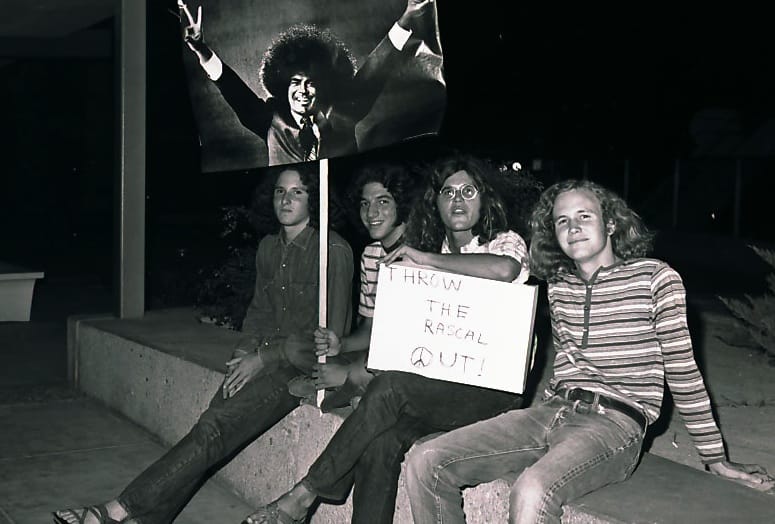 Historically, it has been a spring rite of passage for teenagers and young adults to flock to the desert seeking sun, fun and rock and roll.

Students came from San Diego and Los Angeles by the carloads hoping to purchase tickets for the two concerts that were sponsored by Los Angeles FM stations as part of the two-day pop music festival.

The first concert was held three miles east of Palm Springs in Cathedral City at the Sunair Drive-In.

The marquee at the theater read: Tuesday only Palm Springs Pot Festival from 6 to Midnight “Come high and stay high.”

The day of the event, ticket holders were let in and throngs of others stood outside hoping to get past the gates and into the venue. More than 5,000 concert-goers filled the drive-in. Those who could not get in broke holes in the fences and pushed in to see the bands and revel in the music.

The second night, April 3, at the Palm Springs Angel Baseball Stadium, law enforcement teams kept the peace by securing the stadium after the 3,500 concert revelers were let in.

Crowds began forming outside the concert and the crowd, which became a mob and spilled across the street to the service station on the corner of Ramon Road and Sunrise Way. The police formed a line with the owner of the service station, and he shot and killed a 16-year-old male youth in what authorities later deemed self-defense.

A Riverside Press-Enterprise editorial of April 9, 1969, concluded: “The week has gone, but a bad feeling lingers on. The record makes essential the kind of thoughtful long-range preparation that can cut down on the chances for a repetition.”

Permits were not issued for outdoor concerts in Palm Springs for more than a decade.