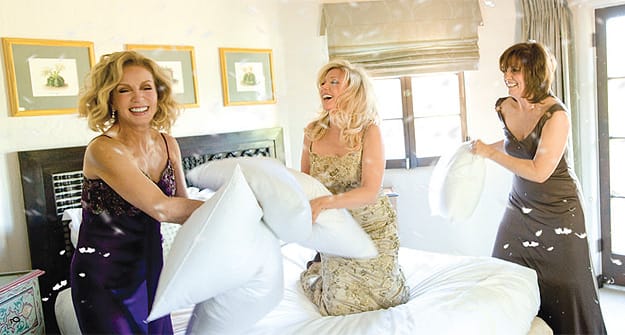 Feathers flew as Linda Gray, Morgan Fairchild, and Donna Mills pummeled each other with pillows. The trio of nighttime soap stars whose characters fought hard for what they wanted laughed and squealed like teens — despite being dressed in designer gowns — during a mock pillow fight. Then they threw their pillows at the Entertainment Tonight camera, there to capture the scene for an upcoming broadcast.

The Palm Springs Life photo shoot in the Movie Colony marked the first time the stars of Dallas, Falcon Crest, and Knots Landing “worked” together, but they’ll do so again on Feb. 21 as co-hosts of the Steve Chase Humanitarian Awards in Palm Springs.

Although they have not collaborated through the years, they clearly share a bond, a mutual admiration and friendship that Gray calls “women actors on the leading edge.” “We were the first Desperate Housewives,” she says of their roles as strong women in often-tough situations.

“We are just the girls hanging out — we should spend the night,” Fairchild said at the shoot. “It is fun to see how we’ve matured.”

If maturing means trading in their shoulder pads for challenging roles on stage and screen and leading important humanitarian causes, then the three decades since their primetime TV roles have been a success. After the pillow fight, they pulled feathers from their hair and lip gloss and concurred that they should have reconnected years ago.

“We were all strong women, but I was the naughty girl,” Mills says of her role as Abby on Knots Landing. “I had nine years to perfect that one. You never knew what she would do next, but she had a heart.”

Although she is still entrenched in movies and television, Mills is dedicated to her role as mother to 14-year-old adopted daughter Chloe. “Once she was in school, I made it a rule not to go out of town for work,” she says — one reason she enjoys doing Hallmark Channel movies (the latest, last October, was Ladies of the House). “They know to offer me movies that are shot here in town,” she says, referring to her Los Angeles home base.

Life after Knots Landing saw Mills forming her own production company, choosing starring-role projects that would empower women, such as My Name is Kate and Runaway Father. In the desert last November to receive an award at Palm Springs Women in Film & Television’s inaugural Broken Glass Awards, she said in her acceptance speech, “I learned [in my career] what tremendous power women have.”

Visiting the desert is really coming home for the award-winning temptress who first made a name for herself in Play Misty for Me. “I used to own a condo in Santa Rosa Cove in La Quinta,” says Mills, a trained dancer and avid hiker. “I am a big tennis player. I used to walk over to [La Quinta Resort’s] tennis courts and play.” She returns to the desert every year for the Indian Wells Tennis Tournament (formerly Pacific Life Open).

“Playing tennis is my biggest pastime. I would play every day if I could,” says Mills, who has a tennis court in her back yard.

She has also been involved in environmental issues for many years. “I attempt to get the entertainment industry involved,” she says. “I have been on the board of the Earth Communications Office since it began 17 years ago, doing a number of PSAs and working on greening the studios early on, before it was a popular thing to do.”

She feels fortunate to be offered interesting parts these days, such as her role in Nip/Tuck as a woman who wanted to look like a cat. “At some point, I wouldn’t mind living in New York again,” says Mills, who started her career in Woody Allen’s stage hit Don’t Drink the Water. “I would like to do stage work again."

“One of the nice things is you never know what the next role will be.”

When Morgan Fairchild auditioned early in her career for a role in a movie (“a ripoff from Carrie”) and was reluctant to take to the bad-girl part, the director told her, “A good bitch is hard to find.” Fairchild quips, “The movie began my road to bitchdom.”

And what a great “road trip” it has been for the actress known for her curves and sexy voice. She first starred as a murderess on the daytime soap Search for Tomorrow and then originated the role of Jenna Wade on Dallas for one season. Her role as Constance on Flamingo Road earned her a Golden Globe nomination before she played naughty Racine in Paper Dolls and starred for two seasons on Falcon Crest as yet another ambitious woman.

Add to the list countless television and big-screen roles recent stage productions, including the role of Mrs. Robinson in the national touring company of The Graduate. And Fairchild recently returned from the ShopNBC studios in Minneapolis, where she launched her own skincare line and fragrance under the name “Fabulous.”

“I like breaking the barrier and doing [roles] people don’t expect,” says Fairchild, who surprised audiences by playing a lesbian girlfriend on Roseanne and Chandler’s mother on Friends. “I just did a Nip/Tuck and a Chuck and a couple of movies ready to come out.

In a coming big-screen movie, Steam Room, she plays the widow of a gym owner in California suburbia. “I am so unglamorous [that] people have asked who the actress is.”

Although Fairchild has been actively working her craft since the age of 10, her private time is different. “I am a loner,” she says. “My pursuits are mainly intellectual. I have odd interests: emerging viruses and terrorism. People are surprised that I know more about terrorism than 99 percent of Americans — including [members of] Congress. They aren’t expecting to hear about these [topics] from a little Hollywood blonde,” she laughs.

Fairchild has appeared on shows from Larry King to Barbara Walters speaking about AIDS, and her name has been associated with a variety of humanitarian, political, and environmental causes, including desert preservation and the successful movement to make Joshua Tree a national park.

“I am very fortunate to stay acting, but I would like to write scripts and books,” she says. “I’d like to find other ways to be creative in a business that doesn’t value women over 40.”

Returning to the desert — a place where her late parents lived and worked for 30 years (her father owned Gray’s Jewelers in Palm Desert) — is bittersweet for Gray, who lives in the Los Angeles area. “I love it down there,” she says, “but I needed a break from the desert. The memories were still painful.”

Family is high priority for her. “I just returned from what I call my Auntie Mame tour,” she laughs. “[Dallas co-star] Patrick Duffy and I were invited to Rome to be on a talk show, so I took my 17-year-old grandson with me for our birthdays; we were born on the same date, so we share a special bond.”

Gray cites one important parallel among her ’80s co-icons. “What we have in common is longevity,” she says. “We’ve all hung in there.”

Yet, she considers her award-winning role on Dallas her favorite, having had 11 years to hone the character. “I had a choice. Sue Ellen could be a bitch, but I thought nobody is just one thing,” she says. “Even my 5-year-old grandson is deliciously complicated. I chose to breathe something larger into Sue Ellen.”

More than 4,000 fans and media from all around the world turned out at Southfork Ranch last October for the 30th reunion celebration of Dallas. “It was good chaos,” Gray says. She went there immediately from filming the movie Flight of the Swan in Greece, due for release this spring. “It’s a dream [role] for an actor,” she says. “I get to age.” She has also finished a stage run in Terms of Endearment that followed her role as Mrs. Robinson in the London stage production of The Graduate.

“Doing a play is the epitome of an actor’s life,” she says. “The audience laughs immediately, cries immediately — right in your face. It is exhilarating.”

Gray, who has her own busy production company, has discovered the key to inner peace since hectic TV serial days: “Gardening is like meditation to me. When I did Dallas, I had to ‘pencil in’ life. Every day was different. Women need to take care of themselves from the inside out. Life should be led with grace and ease.”

To read a further Q&A with the actresses and to see photos of the Entertainment Tonight crew covering our photo shoot, click here.