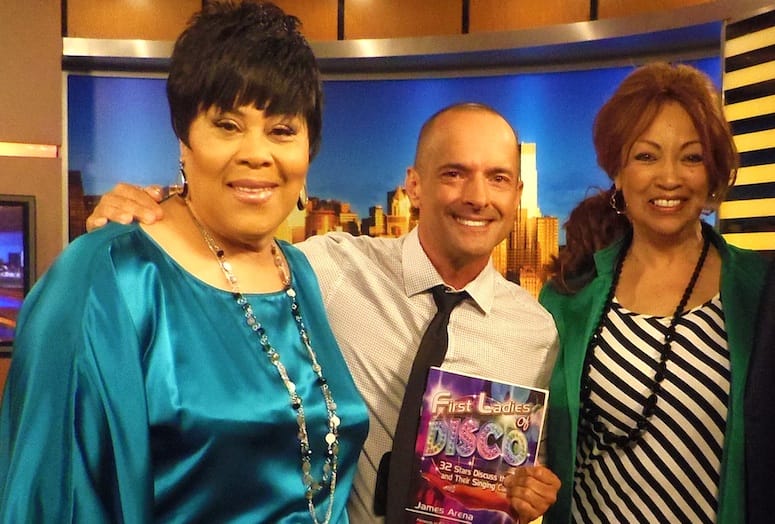 The music/dance craze that inspired the nation to shake their groove on the dance floor, “Do the Hustle”, and embrace Saturday Night Fever, has been all but relegated to a passing 1970’s fad.

For author James Arena, however, “Disco Inferno” still boils inside. His lifelong passion for disco music and dance led him to explore the subject of his favorite song, “More, More More” sung by artist, Andrea True Connection.

Fascinated by her background as an adult film star turned big disco hit maker, Arena wanted to tell her story. Unfortunately, she had passed away, but it created the impetus for Arena to gather “icons of the disco era” together to share their own accounts.

He interviewed approximately 72 artists and producers for First Ladies of Disco, the first such book of it’s kind. Exploding in popularity, the tome has become a two-part series about the legends of disco. Palm Springs Life spoke with Arena prior to his trip to California where he will take in the much-anticipated performance followed by a book signing from 1-3 p.m. May 4 at Just Fabulous in Palm Springs.

How does it feel to have this book inspire this charity event?
“This came about as a complete surprise. When I heard that AIDS Assistance Program was considering my book as the theme for their big annual event…it felt good. It’s an incredible thing and I never envisioned this when I wrote the book. To have some of these artists come together to perform on stage is phenomenal.”

Was this honor an affirmation of your work?
“You never know what might happen when you write a book. You hope to get attention and with all of the important people involved in this project, I felt it had a chance. I never dreamed it would be the theme of a great charity show. It’s very exciting to me.”

What inspired you to do the book in the first place?
“I have been a huge disco fan my whole life. I discovered disco when I was 17 years old and ironically, I never enjoyed going to the clubs. I just loved the music and it has stayed with me. It’s a great workout, it lifts my spirits and inspires me no matter what’s going on.” Why was it important to capture the interviews of these legendary disco singers in a book?
“I feel like there is something about a book that lasts. It’s different from going online. Holding a book in your hands, even in digital format, is really a cool thing. I think it also makes the subject more historic. There is no other book about disco legends, and I am thrilled to get opportunity to break the ice. These great stars have so many stories to tell and they are told in their own words. It’s not me writing about them. I am happy to get their stories on paper for posterity. There is a lot of history wrapped in these books.”

Why do you think the book has done so well?
“I think people are appreciating these musicians, singers, producers more today. People were ambivalent to disco and many considered it a less than serious music style. Today, people can look back on the nostalgia and find great beauty in disco music. The records of these great singers show the power of their voices without technology to enhance it. These ladies were real pros and continue to be amazing with off-the-chart energy when you see them live.” What was special about that time and place in music history?
“The disco era was a big transitional period. Coming out of the 1960s, a heavy-duty era with the Vietnam War, Woodstock, it was deep and heavy. People needed a break and as disco started evolving on pop charts, people were excited to start dancing again and they could feel alive. It took over the culture at the time and I think this is why disco’s reputation got tarnished.  By the end of the 1970s, the market became saturated and too campy at that point. Had it progressed at a leisurely pace, I believe we would be talking about it as a viable music genre versus a style relegated to a 10-year period."

What were the disco divas most important contributions?
“I think it’s their professionalism and their work ethic. They really wanted to please audiences. In almost every interview the primary focus of each artist was to entertain and bring joy to audiences. Most were not business people but truly gifted vocalists with a goal to be an artist.”

What is important for today's generation to know about these gals?
“It would be great if they could hear this music again, let these singers just do their thing on stage and hear them and listen to them. Our current culture is so youth driven that mature singers don't get the exposure that they deserve. I think this generation would love, love, love their music.”

What was your biggest surprise in researching and conducting the interviews for the books?
“In every chapter an artist would tell me something or reveal something great or not so great. Each artist experienced such different things and endured difficulties as well as extraordinary things. I interviewed Janice Marie Johnson, the lead singer of A Taste of Honey, for example, and she said, ‘I know what’s a like to be in the back of a limo as a star being driven around to parties and concerts. And I know what its like to be a limo driver.’ To hear what she had to do when disco went sour was sobering. Here she had won a Grammy for Best New Artist (1978) and the song “Boogie Oogie Oogie “ sold over a million records. Johnson was a highly respected musician and I had great sympathy for her story.”

What was the best interview and why?
“From the first book I would say, Gloria Gaynor, the reigning queen of disco.  Right up there with Donna Summer, who had passed away prior to me writing the book. She had important things to say and she was so gracious. I was also quite thrilled to get an interview with Madleen Cane. She was a superstar in disco and an elite model. She was extraordinarily popular and the paparazzi was always after her. She is a quiet women involved with her family and had not done an interview in over 25 years. I was delighted with the unexpected surprise when she granted me that interview.”