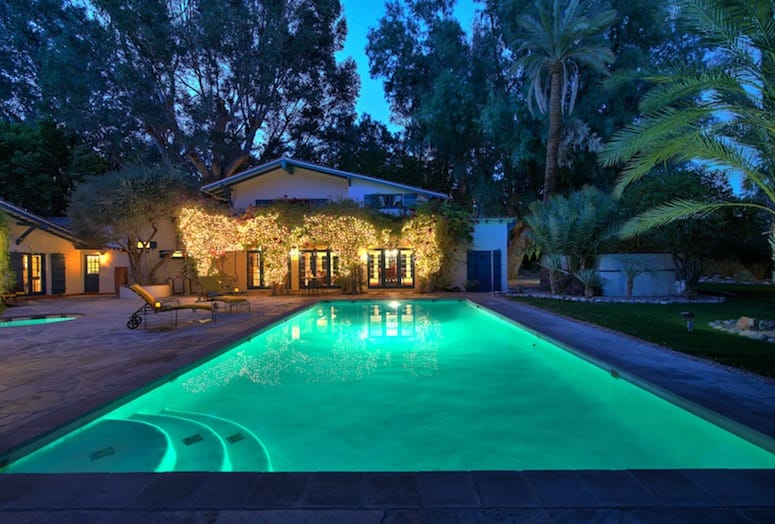 Cary Grant's Palm Springs home, located in the Movie Colony neighborhood where he lived from 1954-72, is for sale.

Admired by women and envied, but still well liked by men, with his universally handsome chiseled features and suave, sophisticated demeanor, there was a touch of vulnerability about Grant.

The house was originally built in 1930 and designed by John Byers in the Spanish Colonial Revival style.

A British subject by birth with the given name of Archibald Alexander Leach, Grant, had a miserable childhood. His father was an alcoholic who committed his mother to an institution for chronic depression, telling Grant she was dead.

At that point his father essentially gave him away to a Vaudeville-type theater troupe at the age of six, with whom he lived and spent many years traveling and performing. When the troupe performed in New York, he fell in love with the city and decided to stay. It was the beginning of a prolific stage career that led to a Hollywood screen test and memorable films including Notorious, An Affair to Remember, North by Northwest and Charade. Grant was nominated for two Oscars and five Golden Globe Awards but never won. In 1970, Frank Sinatra presented him with an Honorary Oscar at the 42nd Academy Awards; he received Kennedy Center Honors in 1981.

Out of a total of five marriages, only his fourth marriage to actress Dyan Cannon produced a child, Jennifer. He retired in 1966 in order to raise her, not wanting her childhood to be anything like his own. One of the most important actors of the Golden Age of Film, Grant died in 1985 at the age of 82, still almost as handsome as at the age of 35, but with a shock of thick, carefully coiffed white hair. Grant attained great wealth through his acting career and was a perfectionist when it came to clothing, cars and homes. He owned two Rolls Royces and homes in Beverly Hills, Malibu and Palm Springs.

Palm Springs was a popular desert vacation home for many Hollywood stars in the 1950s and no one had more A-list friends than Grant including Sophia Loren, Katharine Hepburn, Frank Sinatra, Grace Kelly, Clark Gable and Alfred Hitchcock, for whom one of the casitas is named. Built in 1930 and designed by John Byers in the Spanish Colonial Revival style, the 6,000-square-foot, six-bedroom, six-bath residence is an exact replica of a 19th century Spanish farmhouse. The master suite comes with fireplace and balcony overlooking the pool.

Main features include thick stucco walls with original shutters, a 40-foot beamed ceiling in the great room, original terracotta floor tiles and fireplaces and a master suite with fireplace and balcony overlooking the pool. Carefully maintained and restored in 2009, the estate home, its two casitas and outdoor terraces and pool area is sited on 1.5 lush acres of mature landscape.

Grant’s former romantic Palm Springs estate is listed by Eric Lavey and Mauricio Umansky of The Agency in Beverly Hills. Priced at $3.495 million. Drive by and catch up on the home's history. The home has its original terracotta floor tiles.