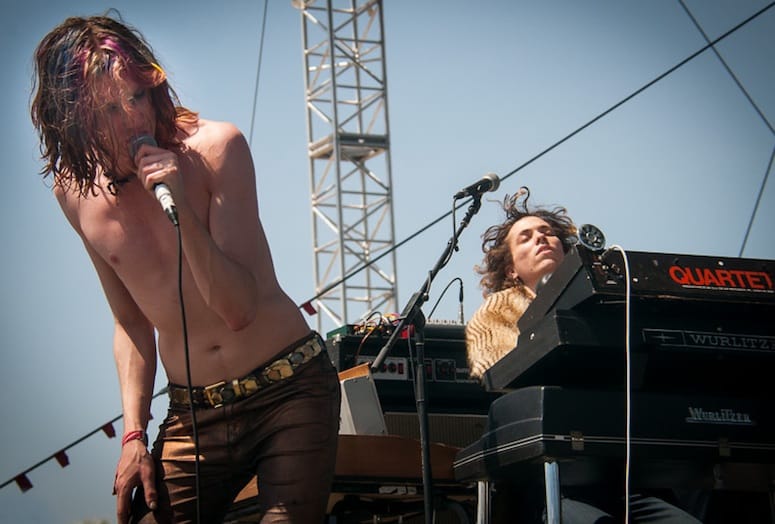 When Sam France and Jonathan Rado met in sixth grade math class, they shared a love of music by artists like The Dandy Warhols and Brian Jonestown Massacre.

The two were in a band together that “wasn’t working” for them, so they branched off on their own in 2005 and began Foxygen.

Recently changing from just four members into a nine-piece band, the band plans on adding a horn section next tour. As their creative palette continually expands, Foxygen plans on also adding visual elements to their next shows.

Whether it’s working with musical inspirations like Richard Swift of The Shins or experiencing their first Coachella, these Los Angeles musicians are enjoying the ride.

They just wrapped up a few select tour dates, and are looking ahead. Currently finishing up a dynamic, self-produced, double album, their anticipated new release is expected in September followed by a full national tour. Known for their high-energy live performances, Foxygen constantly re-arranges songs to keep things fresh. Their hit song San Francisco has launched them into the indie rock spotlight and the accompanying music video has more than one million views.

Foxygen played the Outdoor Stage during Weekend Two at this most recent Coachella. They talk about their music, experiences, and what it’s like backstage at Coachella to Palm Springs Life.

You’re known for crazy live shows, what’s your strangest show yet?
Sam France: “We have had so many weird shows.  There was this church in Philly…there was just a bad vibe. I didn’t even sing.”

What new songs from your new album did you play in your set?
Jonathan Rado: Could Have Been My Love and How Can You Really.

Who has influenced your sound?
Sam France: “Our music is Andy Warhol style. He took a thing that was already something and called it art. It’s kind of what we do with our music. We take different art and then put them in a different frame.”

What was it like working with Richard Swift?
Jonathan Rado: "It was great. We learned how to work quickly and efficiently. Not that we retained any of that since [this] record took 3-4 months to make, but we made the last one in eight days, which was kind of strenuous, but really fun. It causes you to push your brain to make immediate decisions instead of mulling over something. He also is a guru and we learned a lot of things about life."

Did Richard Swift change or influence the way you think of your music?
Jonathan Rado: "We definitely think of music differently after hearing Richard Swift’s music, but we went in with our songs and what came out was sort of what we envisioned."
Sam France: "We wrote the songs as a nod to Richard Swift knowing we were going to go in and work with him. We thought of it as collaboration."
Jonathan Rado: "I don’t know if he changed our sound though. It was a good representation of what we thought it was. We are constantly changing our sound [however], so who knows? That record is something we will probably never sound like again. We can’t ever do two albums that sound the same. We change our songs constantly when we play live. Keeps things fun. Last year, things were getting a little stale." How was playing at Coachella?
Sam France: "The crowd was a little [more] tame than the first weekend. I think by the second or third song we wrangled them in."

Any special Coachella experiences?
Jonathan Rado: "I’m not good in crowds."
Sam France: "We got to see Ty Segall both weekends. That was amazing!"
Jonathan Rado: "I listen to Lorde. I’ll try to go see her. I didn’t know last weekend we could watch from the artist zone. I was in the regular area, and it was intimidating with all the people. I want to see MGMT."

Since this is your first Coachella, what’s it like in the artist compound?
Sam France: "They have amazing food."
Jonathan Rado: "It’s like a dinner parade. It’s crazy. Bands all eat next to each other.

It’s like summer camp?
Jonathan Rado: "Yeah, but no one actually talks to each other. Everybody sort of looks at each other, like ‘hey I know that band and those guys’ and then checks out what they’re eating, but no one talks. It’s strange."