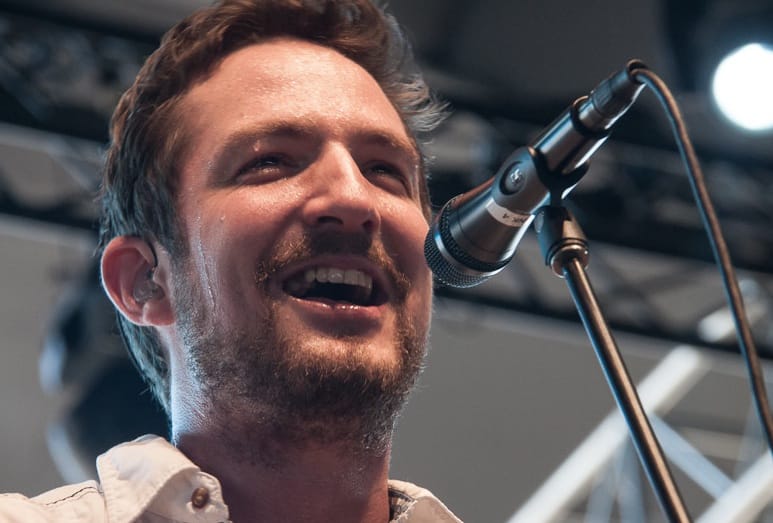 Frank Turner’s strongest desire is to be left alone and to leave other people alone.

The British punk poet lauret is drawn to live the anarchist lifestyle, yet knowing himself too well as a social creature, it might just be too quiet for him long term.

During his recent appearance at Coachella, Turner sits in the press tent spinning desert tales of his heroes Gram Parsons and Adam Duritz (Counting Crows).

This Desert Life by Counting Crows was one of his “favorite all time records”. He knows Queens of The Stone Age record at Rancho Del La Luna. If he ever loses interest in touring, he can be a professor of 1990s hardcore punk. He knows everything there is to know about music.

Turner will play in more than 50 festivals through September, and he wants to give the audience what they came to hear, the hits, like Recovery. Writing songs for his next album while touring, Turner now has an album worth of material but is pushing himself to write even more with a desire to “do better”. Iron Maiden was your first musical passion?
“I was a metalhead first and foremost. Nirvana hit me like a train and pushed me into a punk rock world like NOFX and Descendants. From there, Minor Threat, Black Flag, and Dead Kennedys, which then in my late teens led me into a world of hard core punk obsessive. My specialty subject should be early 1990s hardcore [punk]. I was lost in that world touring and making that kind of music for a long time. I just got into listening to Springsteen, Townes VanZant, and Bob Dylan. My last band broke up in 2005, and I wanted to keep touring, but didn’t want to be in a band, so I bought an acoustic guitar and now here I am in the desert!”

Listen to Gram Parsons at all?
“Yes, very much so! I have been to the Joshua Tree Inn, [but] not this trip. I wrote a song about Gram Parsons called I Knew Prufrock Before He Got Famous on my album, Love Ire & Song.

Any plans to do another travel tour blog like the one you did for NME back in 2010 when you opened for The Offspring?
“I got this tour with The Offsprings, which was a weird one for me, they were lovely guys for asking me, but it was a tough time because I was performing with no back up band, so it was just me, a guitar, and 5,000 confused Offspring fans. It was hard. I came off the tour thinking no one gave a shit, and since then I have met so many people that have said they enjoyed it. I just signed a book deal to write tour diaries. Not a biography. You need to be in your 60s or have been in war to write a biography. I’m a big Rollins fan and his travel books have been a big inspiration to me.”

Any desire to do “Talks” like he does?
"Someone asked me the other day. I said ‘No’. I don’t have enough life behind me yet. Rollins can pull that off because he invented hardcore and was in Black Flag. He’s been on tour since 1980." How did you get involved in the “Dignity in Dying” cause?
"I have suffered the sharp end of being in public political debate in my life, so it’s something I’m not that interested in doing anymore. I’m trying to use my time, whenever the world pays attention to me, to promote things I care about. Dignity in Dying is something somewhat political, but I feel strongly about because I think the ultimate sovereignty is that a human being should have over their own body and life. The idea that anyone has any right to tell someone what to do with their body, in any sphere, I mean, it’s my body! It’s the ultimate expression of individual freedom."

What was the inspiration for your song Recovery?
"I was straight edge from like [age] 16-21. Don’t get me wrong, I did quite a lot of drugs before then. In England we all start drinking when we are like 10 years old anyway. We are a nation of terrible drunks. I generally write from experience. 'Blacking out in a flat in Williamsburg' would be like saying 'in Silverlake'. I just found myself in this position where I was trying some stupid, new designer drugs, at a models house party somewhere, and it was just like, 'What am I doing here? Who are these tedious people? And this is not the life I want to lead'. It was because I was at a real low ebb because I had just broken up with the woman I loved."

Out of pain comes great art?
“This was the silver lining.”

You attended Eaton?
"I was the scholarship kid, a social economic outsider. I got an incredible education. Everybody hated me at that school. It’s funny now because I’ll run into people I went to school with and they are like “Hey buddy!” and I don’t hold back in those situations. It’s usually in front of a small crowd of people, because they are trying to show off in front of their friends. I don’t like you, and you didn’t like me, so go back to your corporate bank job. Everyone took the piss out of me when I said I would be a touring Punk Rock musician and here I am."

So no high school reunion for you anytime soon?
“I would rather gauge my eyes out.”