Friends of the Desert Mountains Make Hiking Cool in the Summer 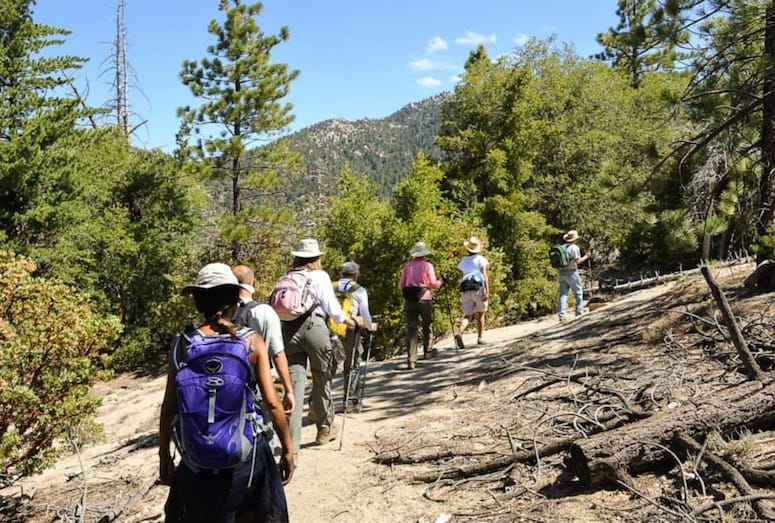 Hikers trek along the Seven Pines Trail in Idyllwild led by Friends of the Desert Mountains.
Photos by Bill Baker

If you thought that summer’s scorching heat would keep you from the great outdoors, you’re in luck.

Friends of the Desert Mountains continue its outreach program with a series of hikes around the area.

Friends of the Desert Mountains are a non-profit organization that focuses on land conservation, support for the National Monument, as well as environmental research and outreach.

Like many desert floor dwellers, Ada Nuckels was not all too familiar with the desert mountain area. Upon retiring, she joined Friends of the Desert Mountains because, “I wanted to be outside and find out about the mountains. I started to work with other volunteers and learn, and I’ve become more involved in the past four years with Citizen Science projects to learn about other things than what we learn on the trails.” Nuckels has worked alongside biologists to:

In addition to assisting in science projects, Nuckels is also a seasoned volunteer guide having traversed many mountain-hiking trails. She will co-host an interpretive hike from 10 a.m. to 3 p.m. July 26 on the Deer Springs Trail featuring panoramic views of Idyllwild and Tahquitz Rock.

According to Nuckels, these hikes are important because: • “We are trying to educate the public about our volunteer organization and our efforts to conserve land for the future and how we go about doing that.”

• “We teach people about the area…not just the desert. We have a lot of vegetation and critters.”

• “We also teach kids and families to respect animals in their natural habitat.”

The Deer Springs Trail is considered a moderate trail with both forest and open walking terrain, Nuckels says. The six-mile round trip will include an elevation gain of about 1000 feet as they approach popular rock climbing peak, Suicide Rock.

This particular journey will begin just North of Idyllwild and Nuckels suggests this Deer Springs Trail hike will include discussion about: