Porcupine Creek in Rancho Mirage California, the market for $75 million 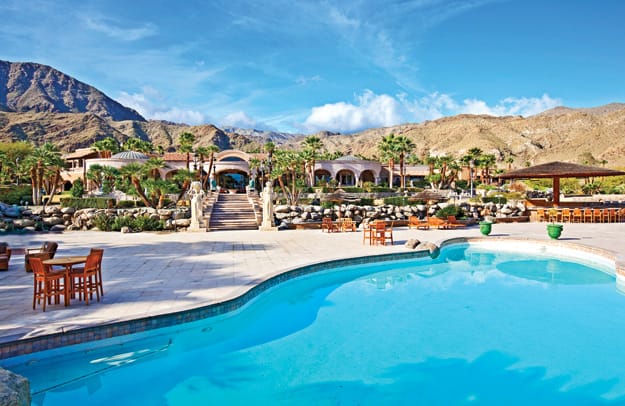 In 2008, Brad Pitt and Angelina Jolie paid $60 million for an Aix-en-Provence chateau. Given its 120 B.C. construction, they spent an additional $5 million on renovation.

Meanwhile, Candy Spelling, widow of TV mogul Aaron Spelling, holds out for the $150 million price established more than a year ago for her own Bel Air utopia.

Chateau Miraval may have 35 bedrooms, Albemarle House may have an Islamic gallery, Fleur de Lys may have a ballroom and 3/4-mile jogging track, and The Manor may have a bowling alley, but none of these megapriced gems has what Porcupine Creek in Rancho Mirage has: its own 19-hole golf course, clubhouse, and driving range.

Offered for $75 million by Christie’s Great Estates, Porcupine Creek hides behind the placid Mirage Cove neighborhood, where houses typically cost less than 1 percent of that price. The 249-acre residential property spreads its triangular girth across the base
of the Santa Rosa Mountains.

“Before designing Porcupine Creek, I took a trip to France and visited many ancient chateaux, studied them, and came back with lots of inspirations,” Patel says. “We walked the raw [Rancho Mirage] land many times and spotted the location of the house in such a way that it would have the view to the mountains, the golf course, and the city lights.”

Certainly the 18,430-square-foot main residence, four 1,860-square-foot guesthouses, and four 600-square-foot casitas hold value and cachet. Patel is an award-winning architect of custom houses in the desert and is now working on a “net-zero” luxury hotel in China.

However, it’s the golf course — designed by Tim Blixseth with a little help from friends (including Tom Weiskopf, Dave Stockton, and Annika Sorenstam) — that makes Porcupine Creek so dear.

THE DRAMATIC CHALLENGE
The golf course’s signature 15th hole, with a jaw-dropping panoramic view from a patch of green in the rugged hillside, tickled the fancy of Travel + Leisure writer Jeff Silverman, who commented in his article, “Personal Golf Courses” (November 2005), that it “demands a bracing carry from a tee cut high in the mountains to a green 247 yards out — and more than 200 vertigo-inducing feet down.”

Silverman called the course (6,718 yards from the back tees) “a good test of skill that incorporates classic lines of play.” Golf  Digest ranked Porcupine Creek the 13th best private course in California (2007-2008) — ahead of Tradition Golf Club, The Reserve, Monterey Peninsula’s historic Dunes course, The Links at Spanish Bay in Pebble Beach, The Vintage Club, and Bighorn Golf Club.

The yardage book credits two U.S. presidents (George H.W. Bush and Gerald Ford) with influencing or inspiring the design of two holes (8 and 10, respectively). A plate engraved “President Ford” on a locker in the clubhouse indicates the former Rancho Mirage resident was a frequent Porcupine Creek golfer (Congresswoman Mary Bono shares the honor with a personalized locker on the women’s side).

Tim Blixseth purportedly bought out four nurseries to landscape the course. Palm trees echo the Southern California environment. Stately saguaros bring to mind Arizona. Evergreens testify to the Blixseths’ attachment to Montana. Wildlife scampers and hops across the terrain; but don’t expect to spy a porcupine — unless it’s a statuary on the putting green, the shape of a knob on the hammered-wood cabinetry in the locker room, or engraved on a clubhouse napkin. Porcupine Creek derives its name from a tributary in Big Sky, Mont., where the Blixseths owned a golf and ski resort/residential community.

The 19th playoff hole conveniently brings golfers back to the main house. (Who needs to return to the clubhouse when a swimming pool and palapa bar are just over the rise?)

THAT’S ENTERTAINMENT
One can easily picture the palapa bar at a tropical resort. Clearly Porcupine Creek begs to entertain (and has, as the Blixseths hosted two weddings and fundraising galas with hundreds of guests). Commercial kitchens, indoors and out, provide cooking power and serving space to regale crowds. The “party pad,” (“around the corner” from the 15th green) also includes a fully wired stage that has seen the likes of Earth, Wind & Fire; ample room for tables and dancing; and a hearth. Nearby, a children’s play area unfolds with a full-size circus carousel and trampoline.

While falling short of the capacity of hotels, the property easily accommodates more than a visiting uncle or two. The Anchor Inn, near the main house, contradicts the desert environment — making guests feel like they’re in Nantucket, the Sea of Cortez, Bahamas, or Malibu. So labeled, the one-bed/one-bath casitas have been individually appointed with seaside-themed colors and furnishings. Each also has its own mailbox (inviting long stays?).

The main house also sports a guest suite with private entrance, office/den, cabinet with sink and mini-refrigerator, walk-in closet, and copious bathroom. Because family was uppermost in the Blixseths’ minds, they created a room with carved wood, kid-sized beds for their grandchildren and, more importantly, a playroom with an Alice in Wonderland-styled and -sized door and nanny quarters across the hall.

COMFORTS OF HOME
Not all guests stay the night, and the perfect host needs a common area in the house to entertain. Porcupine Creek’s game room boasts a white Carrera marble bar with brass foot rail and taps, limestone fireplace, mahogany bookshelves, and a stained-glass domed rotunda lined with built-in banquette seats from a church in Europe setting off a billiard table supported by brass lions.

Ensuring guests stay fit as well as relaxed, the spa (with its own entrance and check-in desk) includes a workout room with the kind of top-of-the-line equipment found in commercial gyms (the ROM “4-minute” cross-trainer alone sells for close to $15,000). The spa features two massage/treatment rooms with Endermologie machines, steam room, Vichy shower room, hot tub, and hair salon.

Given the entertainment-focused nature of the estate, it comes as no surprise that the kitchen boasts the equipment and storage capacity (including a walk-in refrigerator with a walk-in freezer) to serve crowds.

For family-only or casual breakfasts for a couple of guests, the Porcupine Creek host can use a smaller kitchen (though with an expensive La Cornue range) to serve a circular table under a stained-glass dome. A wall-mounted, plasma-screen television in the “breakfast nook” provides an opportunity to check the latest financial news. In the main dining room, an Italian stained-glass panel embellishes one end of the room, while the other end overlooks the lawn adorned with stone sculptures from Europe and the pool area beyond. Throughout the house, stained glass from European churches and elaborately carved wood lend an ambiance of historical grandeur. “The furnishings came from antique collectors from France and Italy,” Patel says. “The carved fireplace in the great room came from Florence.”

Master quarters, reached by stairway or elevator, consume the upper level of the house. The bedroom easily accommodates a baby grand piano, situated to take advantage of light streaming in from the wall-length balcony, which features a spa overlooking a fountain and pool. His-and-her bathrooms include sitting areas, room-sized closets (for the record, hers is larger), and walk-in showers with overhead murals. The master suite also includes his-and-her offices and a coffee station.

All of this deserves the grandest of entries — delivered by an 80-foot-diameter fountain ringed with 90 individually lit jets that shoot water up to 80 feet high. The splash resounds enough to be heard from the 15th tee. A latilla made from long-retired vineyard stakes covers the walkway to the front door.

Inside, a vintage Lalique table and carved thrones set an opulent tone in the foyer. A sheet of water runs down a tile mosaic — handcrafted by Italian artisans — that depicts a golfer and a woman in period dress on the Porcupine Creek course.

Throughout the house, ceiling murals add artistic whimsy, such as in the his-and-hers powder rooms flanking the foyer. His shows two men wearing top hats and red bow ties, with wine and cigar, playing chess. Hers audaciously portrays harlots peering down from a balcony. Other murals, such as the one gracing the ceiling of the great room, reflect a more traditional tone.

SHOW ME THE MONEY
Don’t expect to see an “Open House” sign. Christie’s Great Estates’ vetting process for potential buyers is apparently more stringent than that undertaken for some political candi-dates. And security is tight even for those who prequalify.

Patrick Duffy, founder and principal of L.A.-based MetroIntelligence Real Estate Advisors (he also has a home in the Coachella Valley), suggests that a variety of resort companies — a la Four Seasons, W Hotels, and Donald Trump’s golf oases — could be interested in Porcupine Creek but for a minor detail: a development agreement precluding its use as a resort. That leaves a smaller, albeit global, group of potential buyers. Duffy counts among them aristocrats of the Middle East, Asia, Latin America, and Eastern Europe and Russian oligarchs. He also suggests a profile for Porcupine Creek aspirants: “People who love golf, love the Palm Springs weather and lifestyle, and also have the money to be able to maintain it.

“Clearly, they would want to be able to entertain a lot,” he continues. “This is someone who will be flying [guests] into the airport and shuttling them from there — someone with time and money to spend.” Duffy also thinks Porcupine Creek would appeal to a “Ron Burkle type” who would use the property to host fundraisers as Burkle does at his Green Acres compound in Beverly Hills.

And then there’s The Donald himself, who pocketed a tidy profit after selling Maison de l’Amitie in Palm Beach, Fla., in 2008 for a cool $100 million. He paid $41.35 million for the beachfront property in 2004, refurbished it to the tune of $25 million, and sold it to Dmitry Rybolovlev (if not an oligarch, at least Russian).

“Donald Trump has Mar-a-Lago in Florida,” Duffy says. “If he had the desire, he could make [Porcupine Creek] the West Coast version of that.”