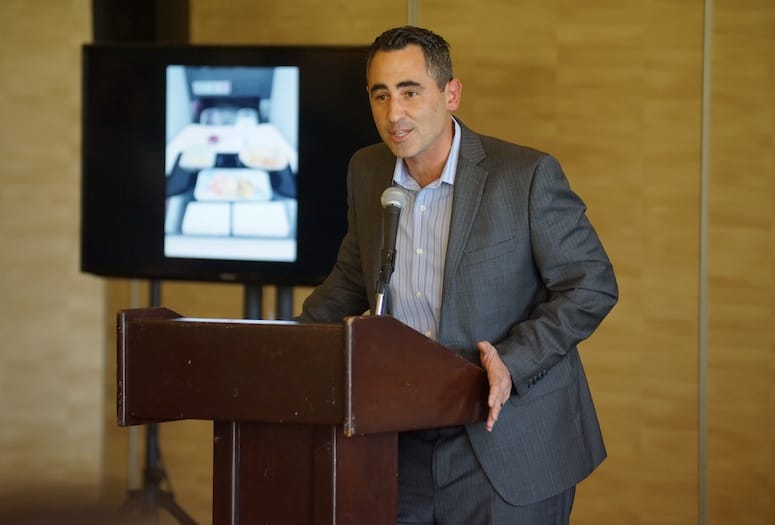 Eventual winner aside, the biggest "leap" taken at Mission Hills Country Club this season may be the one endeavored by Gabe Codding.

Back in 1996, Codding first joined the former Kraft Nabisco Championship event on a volunteer, seasonal basis before eventual working his way up to tournament director in 2009.  Now holding the same title for the ANA Inspiration (March 30 – April 5), Codding celebrates his 20th year with the tournament owning a new purview of the LPGA's first major of the season.

At the Media Day for the inaugural ANA, Codding made time to discuss with Palm Springs Life the change in sponsorship, along with some insights on the event's cross-culture collaboration.

All Nippon Airways signed on as tourney sponsor in late November. How would you describe the quick transition?
"It's very intense because the atmosphere on which you're downsizing and exiting is completely different than what you're building. That, in itself, is a transition mentally. So that's been the probably biggest challenge for me personally: taking something you're directed to downsize and exit out of versus 'flip the switch' and now let's build something that nobody knows what this thing will look like in two to three years. So, it's good; but you also have to divorce yourself from previous mindsets."

As somebody who has spent more than half your life with this event, what's been the biggest test amid the change?
"I think the biggest thing is the perception on how you view yourself, in terms of as a tournament. Something like this that's been around for 44 years, it's easy to just get caught in that groove. So I think the biggest challenge is changing our perception, and challenging ourselves to do better." Not only are you working with an entirely new company – you're working with an entirely new culture. What are you learning about the Japanese culture from the ANA?
"They are very honoring to seniority; I would say a stark contrast to American culture. It may just be my perception, but here in America we're not as respectful of those in authority.  But the way that they (Japanese) introduce people, the way they carry themselves, the way they present their business cards; there's a cultural respectfulness that's immediately evident."

How to you see that ultimately extending to the tournament?
"The Japanese culture as a whole is very respectful, very honoring, very much a people of their word and very hospitable. You'll see unfolded at the event: there's a spirit of Japanese culture that anticipates your needs – and that's what they build their airline on. To me, ANA is at the best in class in hospitality in their industry; so, to take that and dovetail it into a special event translates from an industry-specific spirit of excellence into the tournament."

And what has the transition done to propel your own work?
"I don't do this job for anything other than I believe it's a fantastic product – and that it can be displayed and amplified better. That's the whole reason I'm here. I need that environment on which to thrive; the creativity and the dreaming big. When somebody becomes disengaged, it was hard, but I wasn't about to exit on that note. I've always looked at this event as a crown jewel, and one that can always improve. That's been the fuel that's kept me going. So sitting at the table with people that are just as excited – if not more – it's really a great match."