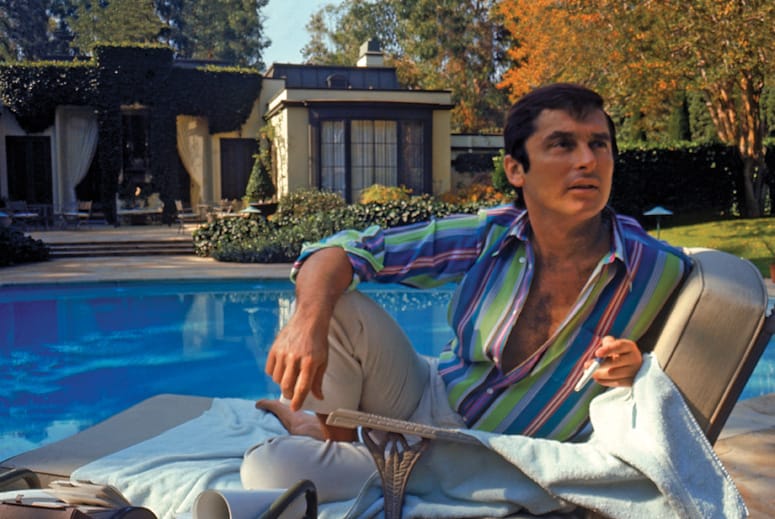 Robert Evans literary endeavor chronicles his recovery from a near-fatal stroke and a series of heart attacks, and relates behind-the-scenes accounts of his illustrious career.
ALFRED EISENSTAEDT/TIME & LIFE PICTURES/GETTY IMAGES

It’s a delicious offer: Robert Evans, clad in white pants and shirt in his Beverly Hills boudoir, the passages from his new memoir, The Fat Lady Sang (HarperCollins), spilling off his lips with incandescent fervor?

His voice, deep, his charm, on, he draws you in.

It’s easy to become seduced by Evans. He began turning heads more than 50 years ago after taking broad steps up the slippery showbiz ziggurat, going from bit player (The Sun Also Rises, 1957) to New York City fashion titan to unconventional studio chief of Paramount Pictures in the late 1960s and ’70s. He, of Rosemary’s Baby, Harold and Maude, The Godfather, and an eclectic posse of other hits, helped save Paramount from professional and financial ruin.

About that: “Writing [a memoir] is not cathartic,” Evans intones. “It’s harsh — scary, in a way. It won’t scare others, but it will scare you.”

A decade in the making, A Fat Lady Sang is a continuation of The Kid, which Evans spent a great deal of time writing, partly in Palm Springs, before its release 20 years ago. He penned the bestseller in the former Las Palmas home of Glen Larson — which later sold to Gene Autry’s widow, Jackie.

“Palm Springs has afforded me the most magical time of living of any place I’ve been to, or lived in,” Evans says.

The new literary endeavor chronicles the writer’s recovery from a near-fatal stroke and a series of heart attacks, and relates behind-the-scenes accounts of his illustrious career. A story about meeting JFK should also arouse interest.

“I hope people get a lot of laughs and a tear or two,” he says. “But I’m looking for more than that — to stimulate people to say, ‘I can do it, too.’ And maybe I paid for a lot of my deeds, deeds that don’t fit the rules. I don’t believe in rules — for a good reason. The people who make them don’t live by them, [so] why the hell should I?”

Playing outside the rules has been a key to his longevity. “But I’ll tell you: I’d take a long, second thought before I’d do it all over again. The book reads much better than it lives,” he chuckles. “But every so often you can touch magic. And that’s my bank … if I can make that happen.”